These easy crispy shrimp tacos are amazing! Like, one of the best things I’ve ever eaten. Baked, not fried, they are crispy and crazy good.

I posted a picture of these crispy shrimp tacos a few months ago on Instagram. You went crazy. (Meanwhile, I was already going crazy at home; they are next level delicious.)

I’ve never had that many requests for a recipe! Shrimp lovers unite. Taco lovers, get on over here.

After making them a couple more times, I figured they needed a decisive spot here on the blog. I don’t know about anyone else, but I will be making these shrimp tacos regularly for the rest of forever.

They are crazy good! And surprisingly really easy (baked, not fried!). They have easily solidified a spot on the “Top Recipes of All Time” list.

In case you’re like “Mel, you always get a little dramatic about food,” I can promise you I’m not the only one raving about these tacos.

Brian and my 14-year old have already requested them for birthday dinners (neither of their birthdays are coming up any time soon, but they want me to still make note of it).

And the last time I made them, a good friend stopped by super fast to drop something off. As she was getting back in her car, I shoved a crispy taco in her hand with the order: “you don’t have a choice; try this now!”

She is used to me doing this sort of thing and wasn’t alarmed by my over bearing demand (welcome to being my friend). She later texted me and said it was one of the best things she’s ever eaten.

These crispy shrimp tacos are way better than any shrimp taco I’ve ever had in a restaurant. For a fraction of the cost. And they take hardly any time to put together.

While these shrimp tacos are ultra-simple to make, they are bound by the laws of flavor building.

These levels are built by a simple mixture of:

Don’t panic or freak about the ketchup. You can still be a foodie and embrace ketchup. I promise. It won’t ruin your reputation. In fact, anyone tasting these tacos will never even know ketchup exists in the ingredient lineup.

The ketchup helps thicken this mixture and adds a concentrated punch of flavor.

This special mixture cooks in a skillet until thick and syrupy. The tomatoes will break down a bit and the onions will soften.

The shrimp go in for a quick 2-minute cooking sesh to turn pink and that’s about it (they’ll cook a bit more in the oven).

The Key to Crispy Shrimp Tacos

The key to crispy, crunchy tacos is twofold.

1) brush a couple tablespoons of oil on the sheet pan (they won’t get as crispy without the oil; trust me, I tried)
2) preheat the oven to 450 degrees F (do it!)

The tortillas are arranged on the oiled baking sheet, sprinkled with a bit of Monterey Jack cheese, and then graced with a strip of that tasty shrimp/tomato mixture.

Bake those babies until the cheese is bubbly and the edges are golden.

I’ve made these crispy shrimp tacos with both corn and flour tortillas.

Both work great and are delicious! But, the flour tortillas do get a little crispier than the corn tortillas (and don’t have the same tendency to break when folding in half).

The recipe calls for 6-inch tortillas – a standard size for corn tortillas. When using flour tortillas, I cut 8-inch tortillas into 6-inch rounds. It’s probably all in my head, but I think these tacos taste better as 6-inchers.

Once the tacos are baked, while still warm, carefully fold in half and garnish with whatever your heart desires.

We are kind of partial to shredded lettuce, avocados, lime wedges, cilantro, and salsa.

The tacos aren’t heavily loaded with shrimp. It’s a very subtle balance of crispy shell, bubbly cheese, bits of shrimp and tomatoes. You could easily make less tacos and load them up a bit more.

But I like the delicate crispy taco situation just as they are. They are one of the best things I’ve ever eaten in my life, and I promise I’m not making that up.

I’ll head this question off before it gets asked. 🙂 If you are allergic to shrimp or just hate it (sob), you could definitely try subbing in something else for these tacos.

I’ve only ever made them with shrimp because I love shrimp more than life. But I’m excited to hear of any other variations that end up being a knockout! 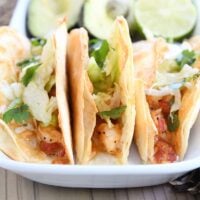 Tortillas: I’ve made these with both corn and flour tortillas. The flour tortillas get slightly crispier than the corn tortillas, although both are delicious in this recipe. (The corn tortillas tend to break a little bit more when folding.) It’s hard to find flour tortillas in 6-inch size; I usually cut 8-inch flour tortillas into smaller circles. You could just make bigger tacos (8-inch) or use street taco size flour tortillas for smaller tacos. Convection Bake: If you have convection bake option on your oven, you could bake both sheet pans of tacos at the same time. Preheat the oven to 425 convection bake. Place oven racks in bottom half of the oven; watch the tacos closely so they don’t burn.
Calories: 194kcal, Carbohydrates: 16g, Protein: 14g, Fat: 9g, Saturated Fat: 5g, Cholesterol: 77mg, Sodium: 653mg, Fiber: 2g, Sugar: 2g

Cookie Sheet {Half Sheet Pan}
Follow @MelsKitchenCafe on Instagram and show me the recipes you are making from my blog using the hashtag #melskitchencafe. I love seeing all the goodness you are whipping up in your kitchens! 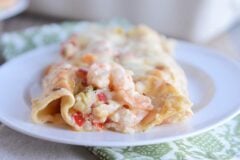 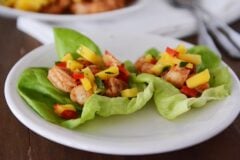 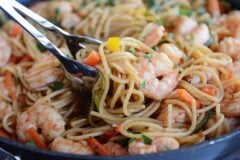 Disclaimer: I am a participant in the Amazon Services LLC Associates Program, an affiliate advertising program designed to provide a means for me to earn fees by linking to Amazon.com and affiliated sites. As an Amazon Associate I earn from qualifying purchases.
Egg-Free Gluten Free Adaptable Main Dish Recipes Seafood The Best Seafood Recipes