Here’s everything you need to know about coconut oil, specifically what it is and how I use it in my kitchen! 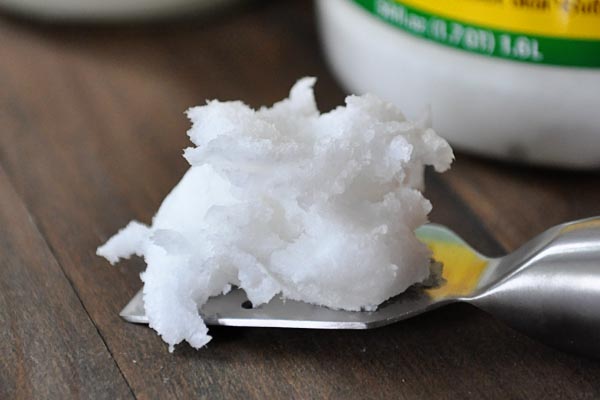 Have you jumped on the coconut oil bandwagon yet? It’s a trendy topic these days.

You can decide for yourself whether or not you feel coconut oil is the new superfood or a miracle oil. And heaven knows there are about a million and one articles online that will convince you in any direction. The basis for its popularity, I’ve learned while reading up on it over the last year or so, has to do with the presence of lauric acid and the fact that it is made up of medium-chain fatty acids which are smaller fat molecules.

It’s a popular oil for vegan cooking (which I don’t do a lot of, let’s be serious) because it isn’t animal-based and if you follow a paleo diet, I’m pretty sure it’s widely used for that lifestyle, too.

So why do I use coconut oil? To be honest, I tried it out initially because of all the buzz. And I loved it.

It is solid at room temperature and doesn’t need to be refrigerated which I like. It also melts at a low temperature (around 70 degrees or so) – I found that out after my house was a sweltering 82 degrees this summer and I glanced in my pantry and saw my jar of coconut oil was completely liquid. Hot! I love the flavor of extra-virgin coconut oil (I’ll talk about the two types in a second) and the fact that refined coconut oil has a neutral taste.

Also, it has a high smoke point which means it’s good for frying or other recipes where you need really hot oil.

Before I get to how I actually use it and for what recipes, for those that may be new to coconut oil, here’s a super-duper brief overview.

There are two main types of coconut oil. Refined/expeller-pressed and unrefined/extra-virgin (or virgin). 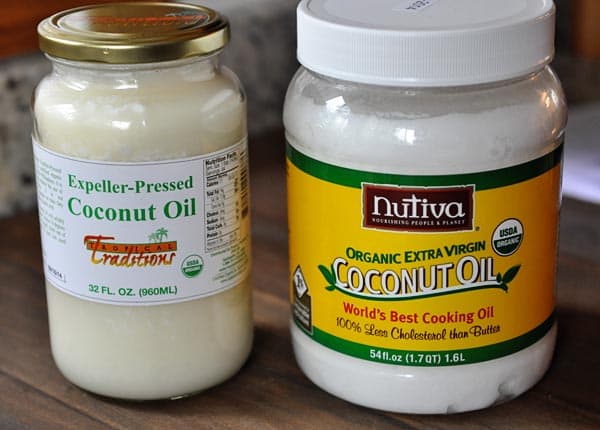 Refined or expeller-pressed coconut oil is refined from dried coconut and doesn’t taste or smell like coconut. Because it is processed, it does require chemicals and isn’t considered as pure or life-changing as the extra-virgin oil. UPDATE: Thanks to those of you who corrected me – some brands do NOT use solvents for refined coconut oil including the one from Tropical Traditions which I use so check the brand you buy to be sure. 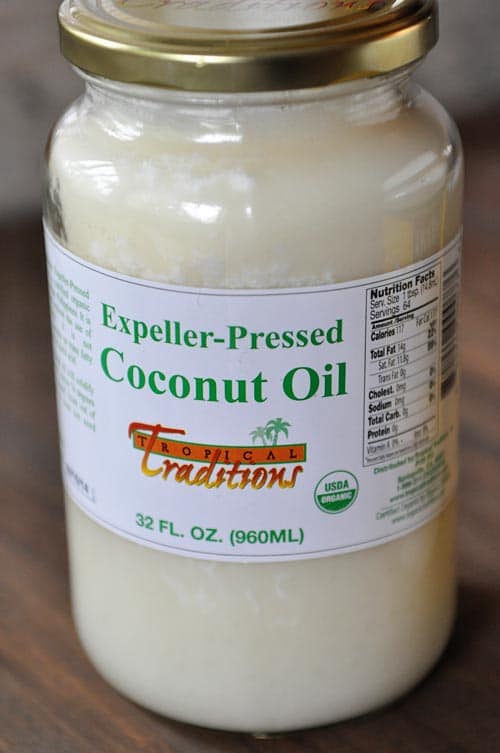 This is the oil great for deep-frying because it can handle higher cooking temperatures. It is usually a bit cheaper than unrefined coconut oil but check sources/products closely because quality can differ significantly among brands (I’ll give some sources at the end).

Unrefined or extra-virgin (or virgin) coconut oil is pressed from raw, fresh coconut and doesn’t require the use of any additional chemicals (like the refined coconut oil does). 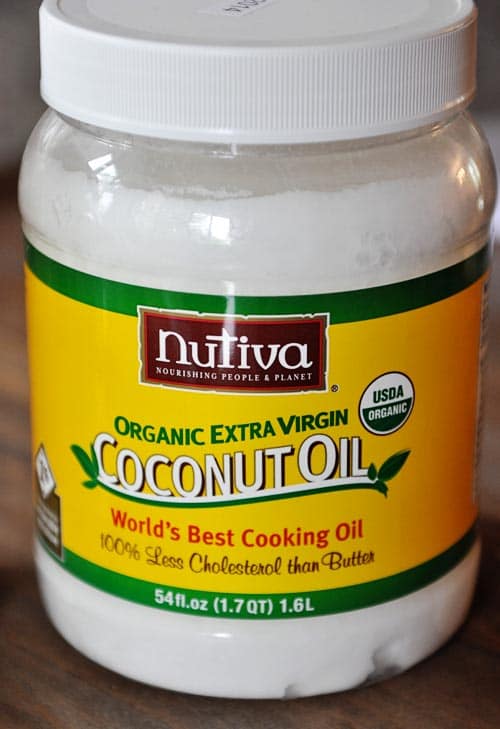 This type of coconut oil has a coconut flavor and smell; pretty mild in my opinion but does great things to enhance the coconut flavor in baked goods.

Ok, so how do I use this stuff?

I keep a jar of the refined coconut oil next to my stove. I use it most times I’m adding a bit of oil to a skillet or pan (say, for scrambling eggs, sauteing vegetables, starting out a recipe that calls for softening onion and garlic, frying up things like these quinoa patties, sweet and sour chicken, etc.). Refined coconut oil is a pretty one-dimensional oil, in my opinion, but great for the simple purposes of sauteing and stir-frying.

The unrefined, extra-virgin coconut oil is more fun (no offense, refined coconut oil). And I don’t want to embarrass my husband, but I’ve found Brian on at least two occasions smelling the open tub of coconut oil with great contentment as he’s putting it away. He says it reminds him of a tropical vacation. Not that we’ve ever gone on one of those but whatever.

Here are a few recipes I’ve used unrefined coconut oil in – it gives an extra boost of coconut flavor, so keep that in mind, but we have loved the result:
The Best Cornbread in the World (melted it and used it in place of the oil)
White Texas Sheet Cake
Coconut and Cashew Granola
My Favorite Cookie (used it soft, like butter, not melted)
No-bake Healthy Granola Bites
Chewy Granola Bars
Pie crusts (can’t wait to share the step-by-step with you; I use it in place of the shortening for my recipe that calls for half shortening, half butter)

I know there are a few more recipes I’ve used it in but since I’m drawing a blank, I’ll add them in the comments if I think of them. 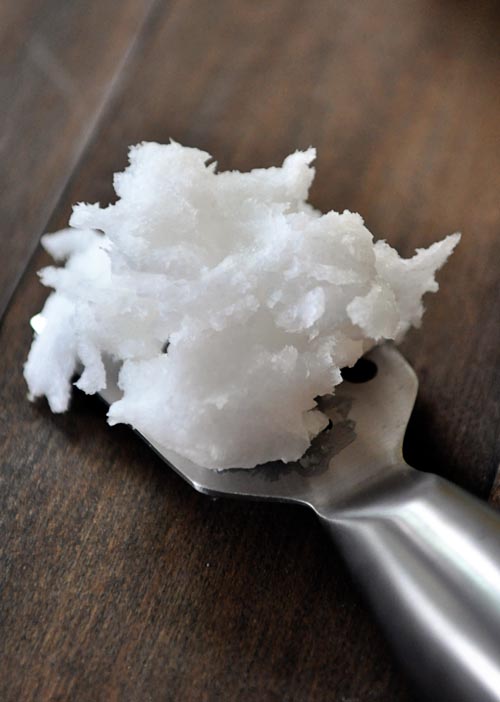 I’m still a bit of a newbie to the coconut oil world (about a year, I’d say). I’m not using coconut oil exclusively, either. Sometimes I just really need butter.

I love butter (no haters, please). And I like to think of myself as a lover of all oils (except shortening, I don’t like it much). But coconut oil is definitely moving it’s way up in what I grab when I need something to cook or bake with.

As an FYI, I have tried using it in pancake and waffle recipes and it’s caused some major stickage to my griddle so I need to figure out how to make it work there. Also, it’s important to note that if you have melted coconut oil to liquid form and add it to other liquids (say, milk or water or whatever for a muffin recipe or something similar) and those liquids are cold, the coconut oil will solidify into small clumps and won’t stay liquid like vegetable oil.

It won’t necessarily ruin the recipe, it’s just something to be aware of. 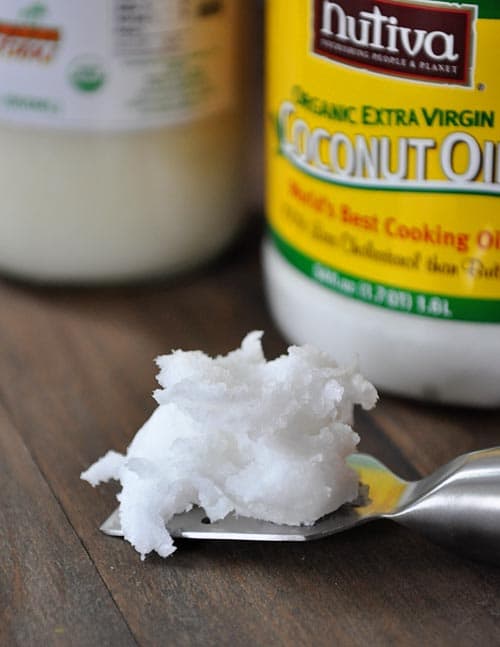 Since I can’t find coconut oil where I live (at least not without selling my firstborn child to afford it), I’ve bought it with great success and joy at Tropical Traditions (they often have coupons and deals for a buy one, get one free type thing, or free shipping, etc.).

I’ve also had people who love me that live near a Costco pick it up there and I’ve bought it on Amazon, too.

How do you use coconut oil in cooking and baking? Also, if you don’t mind, please reference any great sources for purchasing it in the comments if you have any others to add.

I’m really curious to know how many of you are using the almighty coconut oil! 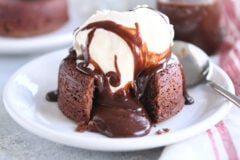 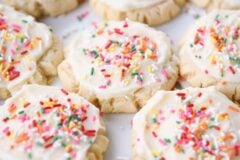