When you don’t want 4 dozen cinnamon rolls staring you in the face, what do you do? You make this amazing small batch cinnamon roll recipe and then gaze lovingly at 12 of the most perfect cinnamon rolls ever!

There is certainly a time and a place for a huge batch of cinnamon rolls.

They’re amazing. And I’m going to show you just how easy they are to make.

Mix the dough ingredients in a stand mixer fitted with the dough hook.

The dough should be soft and smooth after mixing, not over floured (dry rolls!) or under floured (sticky, doughy rolls!).

If you focus on the feel of the dough rather than the exact flour amount in the recipe, you’ll achieve the perfect dough.

Ultimately, when the dough goes from lumpy and shaggy and forms a ball that doesn’t leave a lot of sticky residue on your fingers, you’re good to go.

Perfect Texture for the Dough

You can see that this beautiful lump of cinnamon roll dough holds it’s shape and isn’t sticky, but it is still stretchy and soft.

Holding it up like this, if it starts pulling and sagging without sticking to your fingers, you have yourself a really good cinnamon roll dough.

Plop the dough in a lightly greased bowl and let it rise until noticeably puffy and pretty much doubled in size. The exact time will depend on the temperature of your kitchen, but it should be right around 1 to 1 1/2 hours.

Punch down the dough and turn it out onto a lightly greased countertop (I prefer using nonstick cooking spray over using flour so the rolls stay soft and not over floured).

This dough is so malleable and easy to work with that I never mess with a rolling pin. I just pat it into a rectangle, about 14X10-inches, and call it good.

Spread about 6 tablespoons of softened butter on top. Combine the brown sugar and cinnamon together (and the little bit of flour, if using – more details on that in the recipe below) and sprinkle that lovely concoction over the butter.

Starting with one long end, roll up the cinnamon rolls. The key to this rolling action is to roll them up as tightly as possible without stretching the dough.

Stretching and pulling on the dough while rolling them up will cause the rolls to shrink weirdly in the oven and can cause some of those dreaded gaps in the rolls after they bake and cool.

Once rolled, cut the dough into 12 equal pieces. I find it’s easiest to use a serrated knife (I have this inexpensive one and love it; it’s amazing – aff. link) or a piece of thread or unflavored dental floss.

Lightly grease a 9X13-inch pan with cooking spray and place those cute rolls evenly in the pan. I like to tuck the ends of the rolls underneath. Habit, I guess.

Let the rolls rise until puffy. I know they’re ready when they are starting to get in each others’ personal space. Sides touching and they’re ready to go!

Bake the rolls in a 350 degree F oven for about 18-20 minutes. A tiny bit of browning on top is ok, but don’t let them bake too long or they might be dry.

While they are cooling, I like to whip up the icing and slather it on when they are just warm. Not too hot, not too cold. It’s the perfect frosting situation.

I’ve made these several times over the last few months just for our family. The recipe is the perfect size without too many dangerous leftovers.

It’s really easy to make cinnamon rolls ahead of time!

This post on making cinnamon rolls ahead of time can be used for any variety of sweet roll. 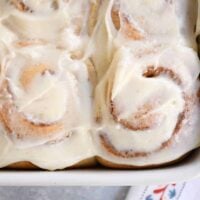 Milk: I prefer using whole milk or 2% milk in this recipe. If you don’t have instant yeast and want to use active dry yeast, use the same amount and dissolve the yeast in 1/4 cup water with a pinch of sugar. If doing this, you may need to add a bit more flour due to the extra water.  Measuring Flour: don’t worry so much about the exact amount of flour called for in the recipe and instead judge the dough by the feel of it. It should be soft and smooth and stretchy without leaving an overly sticky residue on your fingers. Elevation, humidity, exact temperature of the milk, how we each measure flour – all of these things can affect the precise flour amount, so don’t worry if you have to add a bit more or less than the recipe calls for. Flour in the Filling: I like adding a tiny bit of flour in the filling (thanks to this recipe). It helps bind the filling together so the rolls don’t gap as much after baking (like sometimes happens). It’s definitely optional whether you want to add it or not. Make-Ahead: this post details how to make sweet rolls ahead of time.
Serving: 1 cinnamon roll, Calories: 400kcal, Carbohydrates: 55g, Protein: 6g, Fat: 18g, Saturated Fat: 11g, Cholesterol: 60mg, Sodium: 262mg, Fiber: 2g, Sugar: 30g 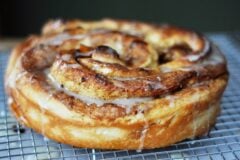 Disclaimer: I am a participant in the Amazon Services LLC Associates Program, an affiliate advertising program designed to provide a means for me to earn fees by linking to Amazon.com and affiliated sites. As an Amazon Associate I earn from qualifying purchases.
Breads Recipes Rolls The Best Yeast Breads Yeast Breads