Kitchen Tip: How to Easily Make Your Own Cake Flour {Two Methods}

Don’t have cake flour sitting around for a recipe? Here’s a simple tutorial to make your own cake flour quickly and easily! 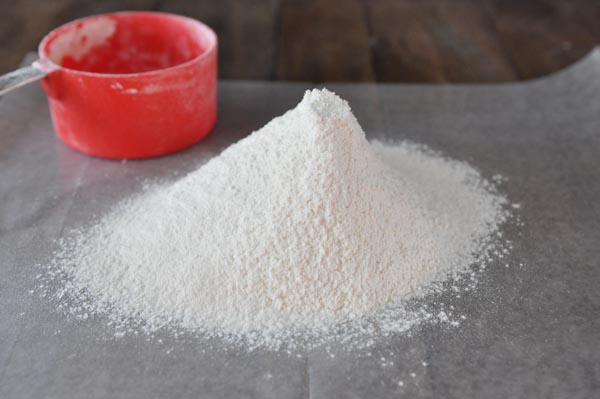 What’s your reaction when you see a recipe that calls for cake flour? Do you dismiss it immediately cause you know you definitely don’t have cake flour laying around or do you bookmark it immediately knowing your stash of cake flour in the pantry needs to see the light?

I kind of fall somewhere in the middle. I keep cake flour on hand far more than I did, say, five years ago, because I’ve come to be a big believer in the science of baking and there are times that cake flour is irreplaceable (imagine me shaking my finger at you when you try to use all-purpose flour!).

But I definitely don’t keep the storebought stuff around enough to make a recipe with cake flour just on a whim.

That is, until I started making my own cake flour. Now? Well, bring on the cake flour recipes, baby, because I’m totally prepared.

And I want you to be prepared, too (especially since I’m unveiling my perfected yellow cake recipe this week and this post may or may not be your salvation).

There are two basic ways to make your own cake flour. The first method uses a measuring cup and tablespoon and the second method uses a scale. My preferred method is the second, because

a) I love my inexpensive kitchen scale and

b) it is a bit more accurate than measuring with a cup since we all tend to measure differently which means there could be varying amounts of flour in that cup from person to person. However, either way will work, especially with the details I’ve given below. So read them, m’kay? 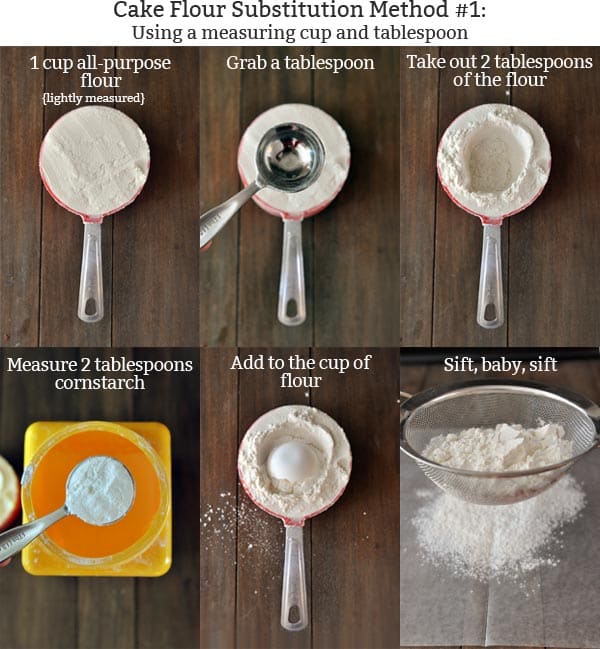 Think of it as a bit of wrist exercise and who doesn’t need that every once in a while, right? Right.
-Once you’ve sifted (twice, remember?), use the sifted homemade cake flour in the place of one cup commercial cake flour called for in a recipe. 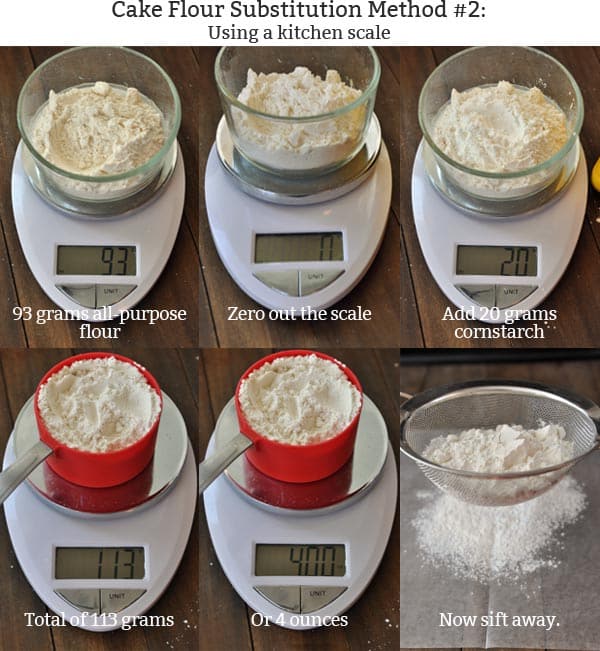 Some more details:
-I’m working with the assumption (which is generally recognized by everyone from America’s Test Kitchen to Martha Stewart) that a cup of cake flour weighs 4 ounces.
-In commercial cake flour, the ratio of flour to cornstarch is about 82% to 18%. If thinking of baking in percentages completely freaks you out, don’t worry, I already did all the math for you in the above tutorial. It’s a bit easier to use grams than ounces for more precise amounts – in the end, the cup of homemade cake flour should weigh 113 grams/4 ounces.
-Just like the first method, sift like crazy! Twice, if possible.
-Once you’ve sifted, use the sifted homemade cake flour in place of one cup commercial cake flour in a recipe (and of course you can make more than 1 cup of cake flour at a time, just increase the amounts accordingly).

So there you go! Homemade cake flour. And it’s easy as can be.

56 Comments on “Kitchen Tip: How to Easily Make Your Own Cake Flour {Two Methods}”