Pita bread is surprisingly easy to make at home; in this post, you’ll get all the tips and tricks to make the pita breads puff perfectly!

I think the puffing aspect of pita bread is what scares the bejeebies out of most people who think they might, at some point in their life, want to try making pita bread on their own at home.

Or maybe that’s just me since I’m pretty sure most normal people don’t go around obsessing about the pitfalls of pita bread.

I had these epic nightmares of what would happen when all of my children had their faces pressed to the lighted oven door to watch the at-home science experiment of how pitas puff to make perfect little pockets…and I subsequently envisioned their dejected expressions when the pitas.did.not.puff.

Because I was sure that would happen and that vision was definitely not going to win me mother-of-the-year award.

Oh wait, that actually did happen. See? Non-puffing pitas are a serious bummer.

However, I was forced to revisit the pita bread conundrum when I came across a chicken recipe I had to try immediately (which I’ll be sharing on Friday) and which called for pita bread.

I couldn’t bring myself to ruin a deliciously inviting meal with the cardboard-variety pitas I’ve spied (and yes bought) at the store on past occasions.

So I took a deep breath.

Embarked on some deep meditation to calm my inner angst.

And I made pitas.

And let me tell you, they were so wonderfully successful that I am kicking myself for not making them before.

Yes, yes, there were a few that refused to puff. But thankfully there were enough that did magically puff to appease the four little grubby faces watching in amazement.

The trick with pitas, I learned after making a triple batch, is that a) they need to be rolled out as evenly as possible (overly thin or thick spots in the same pita round make for trouble when puffing) and b) the top of the pita dough needs to be a tad bit moist (no dry dough!) in order to perform the puff.

Seriously, pita bread is one of the easiest yeast doughs to make.

And how could you not feel superhuman when you’ve just created a piece of bread that has a pocket inside of it for goodness sakes.

That alone is worth the effort to make them.

A.pocket.in.bread. It’s revolutionary, I tell you. 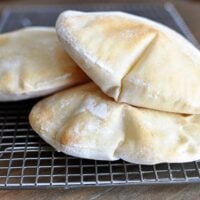 Flour Amount: as with all yeast doughs, I never use the flour amount called for in the recipe as a hard fast rule (unless a weight measure is given and then I pull out my kitchen scale). Because humidity, temperature, altitude and a multitude of other factors can impact how much flour you need in your yeast doughs, I always judge when to quit adding flour by the texture and look and feel of the dough rather than how much flour I’ve added compared to the recipe. Yeast: this tutorial on yeast may help identify how a perfectly floured dough should be. Use the flour amount in this recipe as a guideline only. Wheat Flour: also, I often use half finely ground white whole wheat flour with good results. If using part or all whole wheat flour, add a few minutes to the kneading time to help develop the gluten.
Serving: 1 Pita Bread, Calories: 268kcal, Carbohydrates: 56g, Protein: 8g, Fat: 1g, Saturated Fat: 1g, Sodium: 392mg, Fiber: 2g, Sugar: 1g

Pizza/Baking Stone
Follow @MelsKitchenCafe on Instagram and show me the recipes you are making from my blog using the hashtag #melskitchencafe. I love seeing all the goodness you are whipping up in your kitchens!

Recipe Source: adapted slightly from Under the High Chair, found via Pinterest 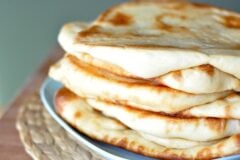 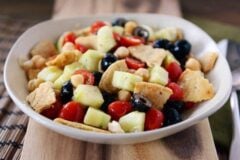 Disclaimer: I am a participant in the Amazon Services LLC Associates Program, an affiliate advertising program designed to provide a means for me to earn fees by linking to Amazon.com and affiliated sites. As an Amazon Associate I earn from qualifying purchases.
Breads Dairy Free Egg-Free The Best Yeast Breads Yeast Yeast Breads