These easy cinnamon and sugar candied pecans taste just like the kind you pay a fortune for at the mall! You won’t believe how easy they are to make at home (how-to video below!).

Naming these easy cinnamon and sugar candied pecans as ultimate favorite holiday recipe this year is so, so tempting as I’m writing this. And I would do it. I really would! Except for a magical cookie recipe I’m going to post next week.

So in an effort to remain calm and collected, instead I’ll just say: IF YOU DON’T MAKE THESE CINNAMON AND SUGAR CANDIED PECANS, YOU ARE QUITE DECIDEDLY A BIT CRAZY AND MUST NOT WANT MAXIMUM JOY IN YOUR LIFE THIS HOLIDAY SEASON.

{Disclaimer: those with nut allergies are obviously exempt from the above dictate.}

Sorry to shout. But seriously, how else am I going to get you to take these delicious and amazing cinnamon pecans seriously?

I have made these so many times in the last couple months, I’ve lost count. Not only are they ridiculously easy to make (and I’m not just saying that), they make the perfect snack to set out for little get togethers, football games. AND, they are crazy good coarsely chopped and thrown on a salad (like my favorite amazing spinach salad).

A longtime MKC reader, Teresa, graciously sent me this recipe (and gave me permission to post it) a few months ago. Teresa makes huge batches of these pecans and gives them out as holiday gifts every year. I have no doubt she has people clamoring to be in her “friend circle” just to get a bag of these delightful pecans in December. Once you taste them, you’ll understand.

These easy cinnamon and sugar candied pecans are fabulous. I’m not someone who generally craves pecans or other nuts. In fact, I’ve spent a lot of time detailing my disgust of why someone would put nuts in my favorite cookie or brownie (although I have made a lot of exceptions for nuts over the years, so maybe I’m maturing a little??).

But there’s something about these buttery, sugary, golden, roasted and candied pecans that have me literally throwing them out my door to every person who will take them so I don’t eat the whole batch (again).

If you’ve ever walked into Cabelas or past one of those kiosks in the mall and been knocked off your feet by the magical aroma of roasted, sweet nuts wafting towards you, you’ll understand the emotion that may fill your heart while these cinnamon pecans bake in your oven and fill your house with a smell no candle or melting wax can ever replicate.

Plus, you won’t have to sell your firstborn child to afford buying a bag at the mall. It’s definitely cheaper to make them at home!

Years ago, I posted this recipe for candied cinnamon and sugar almonds, and I’ve made them on and off again over the years. Tasty and festive! But today’s pecan recipe is less fussy (and even more delicious).

This cinnamon pecans recipe has skyrocketed to my favorite candied nut recipe ever, and I, like Teresa, will be making them year after year! The addition of butter to the recipe changes everything. It lends a caramelly, warm note to the sweet, cinnamon pecans that is extraordinarily delicious (and pretty much dangerous).

Can I Use Another Kind of Nut?

Yes, I think so! I’ve only ever made this recipe with pecans because they are one of my favorite nuts, but you could experiment with almonds, cashews, walnuts, etc.

Is There a Sweet and Spicy Version?

If you want to add a little heat to these sweet, candied pecans, I wholly support you in this! There’s something about that sweet and spicy combo that is fantastic on candied nuts. Add a pinch of cayenne pepper with the cinnamon (more or less to taste). And then try to find it in your heart to share any of the finished batch.

See How Easy It is to Make Them Here! 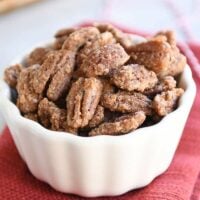 Nuts: I have only ever made this recipe with pecans (because they are sooooo good), but you could try experimenting with other nuts: whole almonds, cashews, walnuts. For a sweet and spicy version: try adding a pinch of cayenne (more or less to taste) with the cinnamon.
Serving: 1 Serving, Calories: 247kcal, Carbohydrates: 13g, Protein: 3g, Fat: 22g, Saturated Fat: 4g, Cholesterol: 11mg, Sodium: 80mg, Fiber: 2g, Sugar: 10g

Recipe Source: adapted slightly from Teresa, a longtime MKC reader – she’s made them for years and originally got the recipe from a Bon Appetit magainze (I cut the butter down from 8 tablespoons to 6 tablespoons – I found they were a bit too greasy with the full 8 tablespoons)

The video in this post was made in partnership with Inspo 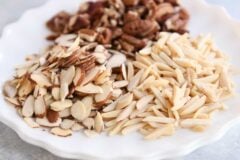 How to Toast Nuts in the Microwave 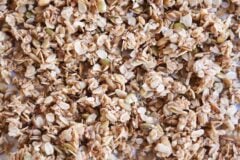 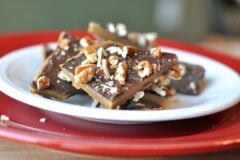 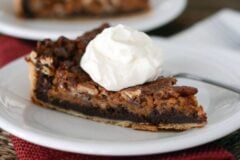 Disclaimer: I am a participant in the Amazon Services LLC Associates Program, an affiliate advertising program designed to provide a means for me to earn fees by linking to Amazon.com and affiliated sites. As an Amazon Associate I earn from qualifying purchases.
Appetizers + Snacks Candy Christmas Desserts Holiday Gift Giving Recipes Snacks The Best Holiday Baking Recipes