Another great running story for you today! It’s Kathryn! And she’s amazing (and I don’t even know her in real life). I love her down to earth “busy mom, not an athlete” personality (who incidentally is quite the athlete!). Thank you, Kathryn! You can see all the other running stories here and if you would like to share your running experience/story, here are the details for that. 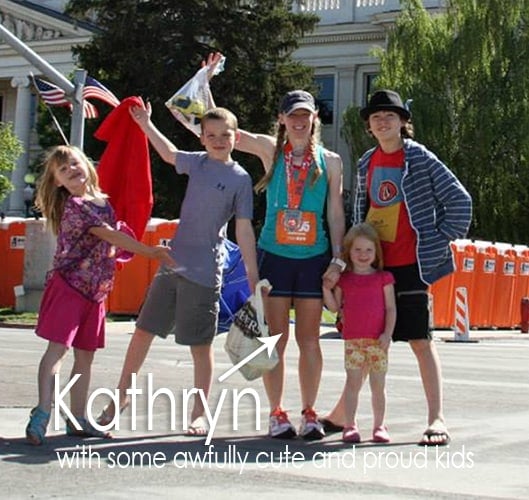 I am just a regular homeschooling mom of 4 who had a goal and went for it.

I started running after my 4th child was born in 2010. Before then, I had only run periodically, and if I got to 3 miles I was pretty happy. A 10k was a HUGE goal for me and I thought that people who ran half marathons and marathons were super-human.

Then I met a friend. A running friend. She convinced me that I could run a marathon. I said, “NO way.” So instead, I ran a half marathon in 2012. Still, she kept at me and I decided to go for it. A full marathon. What was I thinking? I’m a busy mom, not an athlete.

My first marathon was in May 2013 in Shiprock, New Mexico. IT WAS HOT. It was HARD. I had to make multiple bathroom stops. My IT band hurt bad. I thought it would NEVER end. I stumbled across the finish line in 4:24. My first thought was, “I’m NEVER doing that again.” That evening I was on the internet looking for another marathon.

I found one. Utah Valley! “Pain you Enjoy!” Right?

This time I had an even bigger goal. I didn’t just want to finish, I wanted to qualify for Boston. Remember, I’m just a mom like you, no history of track team or cross country or ANY team sport. Nothing. Just a mom of 4 (aged 13-3).

I chose to use the Hanson’s training plan. It went well, but I got the flu during taper. I felt so trashed. I also had taper insecurities. I had my heart set to BQ even though I didn’t want to admit it to others in case I failed. I had chosen my goal pace to give a 10-minute window under BQ, but as the date approached, I doubted everything I had done in the past 18 weeks. I was sure I had missed something. I didn’t feel strong enough to maintain my pace to qualify.

June 14, 2014 arrived. My husband and 4 children drove with me 6 hours north to Utah from Colorado. After a pre-race dinner of spaghetti, my husband took the kids swimming at the hotel so I could get all my stuff ready and laid out without distractions. I wanted to get to sleep early, but once the lights were out, my 3yo daughter got a second wind and kept getting out of bed. I was desperate and panicky because I thought I would never get to sleep.

I got up at 2:30 AM after sleeping off and on. I kept on tossing and turning, thinking I was going to miss the alarm (even though I set three). I just tried to stay relaxed and not stress about the lack of sleep.

I got up, forced down three packets of oatmeal (mixed up with hot water from the tap-no microwave in my room), and my iced latte (purchased the night before and set in the hotel ice bucket) while my husband and 4 children slept. I had everything laid out so that I wouldn’t have to fumble around. (The last thing I wanted to happen was for my 3 year old daughter to wake up.) I left the room at 3:30 a.m. and went outside to a long line of buses waiting In the dark of the night. I boarded the bus wearing old sweatpants with paint on them, a big, thick hoodie, and carrying a fleece blanket.

I arrived at the starting line at about 4:30 am. They had lots of campfires around. I had felt like a dork carrying that huge blanket, but I was so glad I did. People were huddled around sitting on the ground. I saw one girl wearing an old bathrobe! (Good idea!) I rolled myself up like a burrito on the ground, put the hood over my head, and just tried to doze for another hour. It was so peaceful under the stars.

Before I knew it, it was time to get to the starting line. As the gun went off I tossed my blanket on the fence and proceeded to cross the line.

The race was so different from my first marathon (Shiprock, NM) because there were so many more runners. I loved all the energy and excitement around me.

My Garmin was acting weird because at first it said my pace was 10-something. I didn’t feel that slow, so I think something was just wrong. When I finished the mile, it said 8:40. Hmmm…. I freaked out a little. My A-goal pace was 8:35.

Then during the second 2 miles the Garman said 7:xx. I was freaking out more because I didn’t think I was going fast. Too slow, too fast…. I wasn’t trusting my Garmin and I wasn’t trusting myself. I started running as slow as I possibly could and just relaxing and breathing deeply but it was still in the 7’s. I didn’t think I could go any slower. I was surprised to find that those miles ended up being 7:31 and 7:35.

I was shocked and then really focused on slowing down because I was worried about burning off my glycogen stores. Those aren’t typical paces for me.

The first half of the race went smoothly. I barely remember anything, except enjoying rolling hills and the beautiful course. There some strong headwinds, but my mood was cheerful.

At mile 13, I started my ipod playlist. my DH had created a surprise playlist for me. (He asked for parameters.) I loved it so much… Super happy, upbeat songs that made me laugh and cry because they just made me happy (some corny stuff from my childhood like the theme from “Happy Days” and “Laverne & Shirley”, too-just to make me laugh.)

Everything was going fine with my fueling/hydration, and I felt great until I hit mile 16. I started having my stomach issues again, even after taking Imodium before the race. (My first marathon, a year ago, was filled with pit stops due to stomach problems.) I had to make a quick stop at a porta potty, which was conveniently there at the perfect time. Miles 16 and 17 were slower as a result. I was really bummed to lose that time.

Then mile 20 came and I had to get to a porta potty quick. I mean, really quick or it would get embarrassing. Thank goodness I was right at one and there were no lines. More time lost. At this point my IT band also started bothering me. Things seemed to start falling apart. My IT band continued to hurt until the end.

Mile 21-I grabbed a banana, I was so sick of Gu. I held the banana and smashed it in my hand and ate it like Gu. I had banana down my arm and leg. I was a mess, but didn’t care. I was beyond caring about anything.

Mile 22- DH and our 4 kids were cheering here. DH ran with me for a bit to encourage me. I was so tired I couldn’t say anything to him.

Miles. 24-25-26 I started wondering if it would EVER be over. I had given everything and I wondered if I gave too much and might not finish (collapse). It felt like the wheels were falling off. During the last 5 miles I was doing the math in my head to see if I could BQ. I thought it was too close and I was despairing. (I was doing the math wrong -couldn’t concentrate.) I told myself to dig deep and leave it all on the course. I told myself —if it was easy everyone would be doing it. I tried to talk myself into being strong.

The last 3 miles were below goal pace, but it was all I had left. I crossed the line at 3:45:23 (9:37 under BQ) and just started crying. I couldn’t help it. Sobs burst from my inner being… I found my husband and just fell into his arms and sobbed and sobbed. He thought it was because I didn’t qualify—but I HAD qualified! By over 9 minutes! And I was crying because of the huge culmination of everything. I think you get it.

I rang the PR bell and got my BQ shirt (the race gives out shirts to people who qualify for Boston), then back to the hotel to sit in the hot tub while the kids swam. They had purchased a decadent chocolate eclair for me, which I finally ate about an hour later. Before that I just felt like throwing up.

That was 7 months ago.

So here I am… Now in January 2015, training for my 3rd marathon, except this time I’m going to Boston. Never say never. I didn’t think Boston would ever be in the cards for me. I’m just a normal person, a simple stay-at-home mommy who had a goal and went for it. You can do anything you set your mind to.

You can do it!
Kathryn