Let’s Talk: How You Measure Flour Makes a Difference 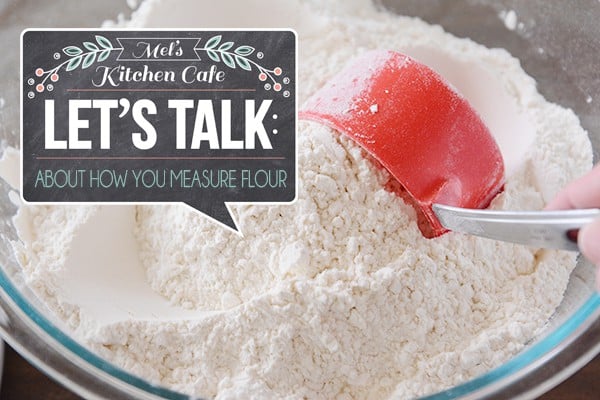 I hate to get all in your business today, but we need to talk about how you are measuring your flour.

Years ago, I did a kitchen tip about it. But it’s time for a little refresh (thanks for all your comments on the Triple Chocolate Zucchini Cookies this week that made me shoot this to the top of our Let’s Talk priority list).

If you asked ten people to measure out a cup of flour, it’s very likely that the actual amount of flour in each cup would be all across the board depending on how that person measured it. This is why many experts say the only real way to ensure baking success is to weigh your ingredients. 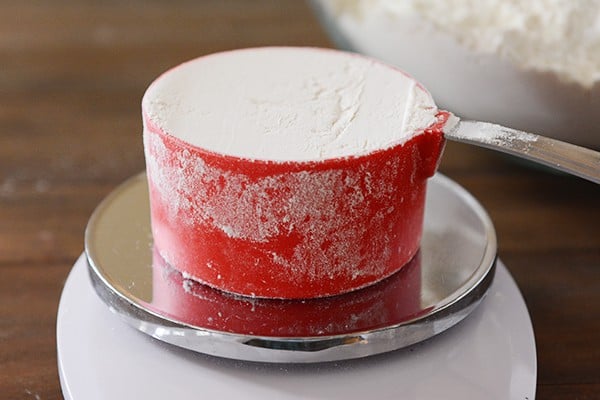 This is a great idea unless a) the recipe doesn’t give weights and b) you don’t own a digital scale. Don’t panic. Read on.

I’ve slowly been adding weight measures to my archived baking recipes (and most of my new posts over the last year include them). Seven years ago, you wouldn’t have seen me using a kitchen scale at all.

I thought it was fussy and a little pretentious, if I’m being honest, and unnecessary. But as I started baking more and more and more and reading advice from places I trust (like America’s Test Kitchen and King Arthur Flour), I decided it was worth $15 to get myself a digital scale (I’ve owned this one and currently own this one)…and I’ve never looked back. 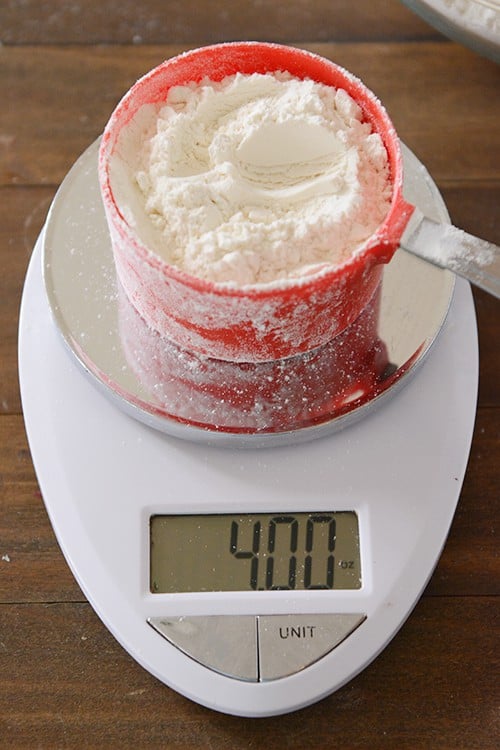 …which is not even close to filling up the cup. To me, this says if you don’t own a scale, you are most likely going to significantly overmeasure the flour in a recipe that’s been developed using 4 ounces per cup.

America’s Test Kitchen, for most recipes, uses 5 ounces per cup. And because I can realistically measure out 5 ounces of flour in a cup, it’s the rule I follow.

Updated to add: there have been some questions in the comments, so let me clarify quickly – this post is intended to simply highlight how the method of measuring can impact the weight of a cup of flour. But on an every day, practical level, I don’t weigh my ingredients one cup of flour at a time like is shown in this post.

Instead, I put a bowl on the scale and use the tare feature to zero it out. Then I can add the dry ingredients until the correct weight is reached (using the tare function over and over if adding different dry ingredients to the same bowl). 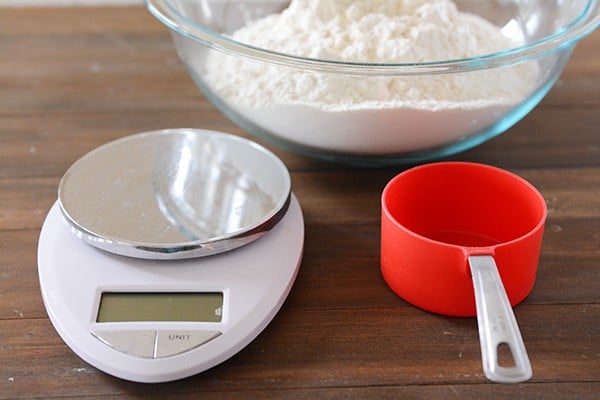 If I had to whip up some scientific research from eight years of blogging and lots of troubleshooting with many of you in the comment thread of my baking recipes, I would go out on a limb and say that in many cases, flour is being over measured more than it is under measured.

Measuring flour probably falls into one of three methods (although clearly there could be more options if you got all wild and crazy with the flour measuring). Let’s take a look at them and see how each method converts to the scale. These three cups of flour were all measured differently although they look pretty similar. How do you think they stack up? 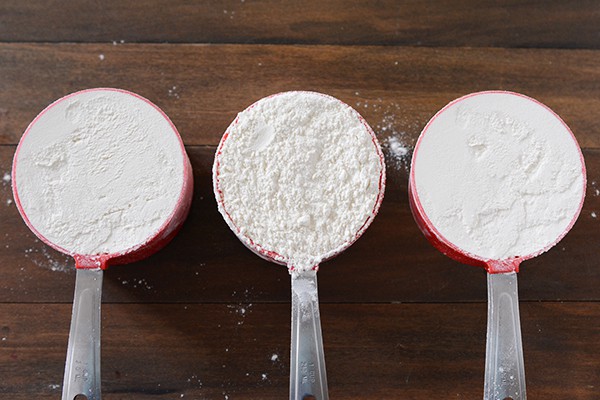 First up. The Dip & Level (or Scoop & Sweep or Dip & Sweep or…you get the picture) method. This is what I use 100% of the time when measuring flour with cups. Keep in mind: it assumes that the flour is nice and fluffy and not packed. I have an enormous flour bin in my pantry and I do this fluffing action every time before I measure out flour. Use a spoon or the measuring cup to break up the flour and fluff it up so it’s nice and airy. 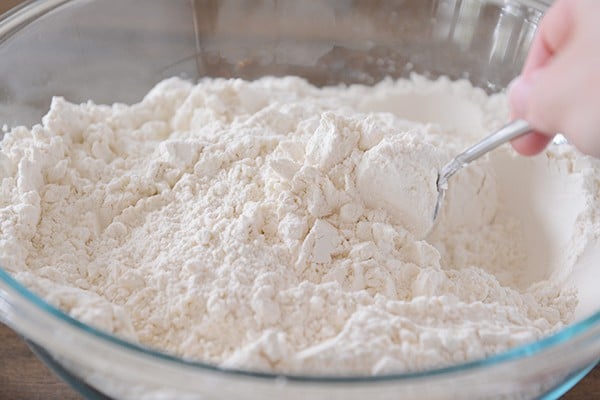 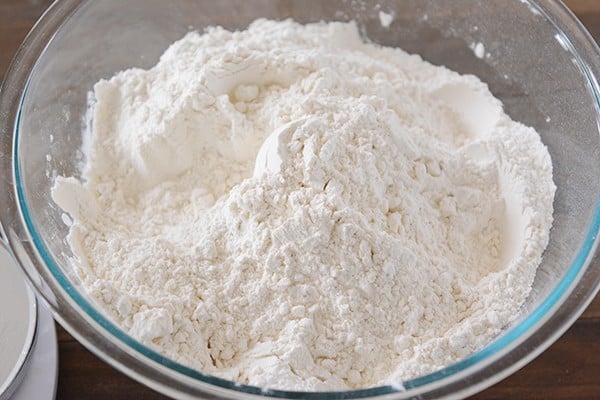 Now, simply dip in the cup lightly without overpacking the flour. 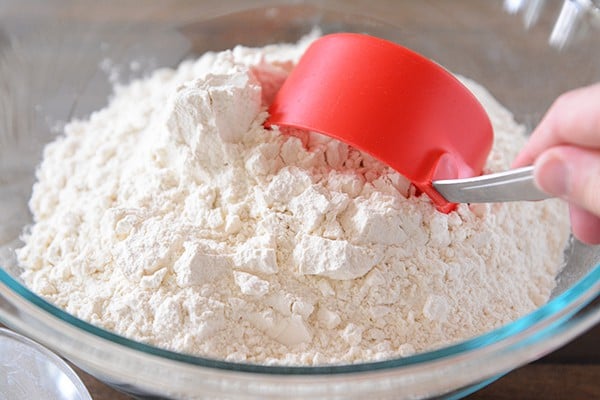 And level it off with a straight edge. 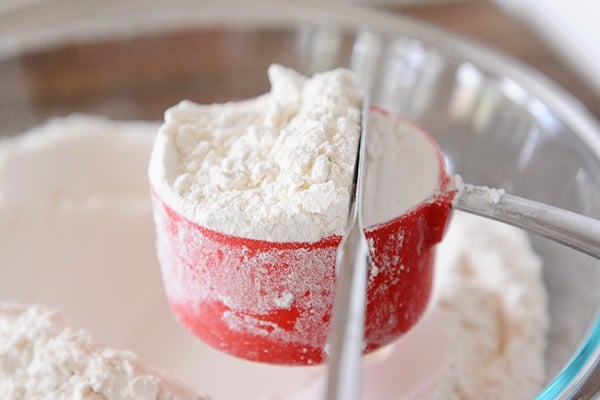 Ah, look at that. Five ounces on the money. That’s what I’m after with every cup of flour that I scoop. 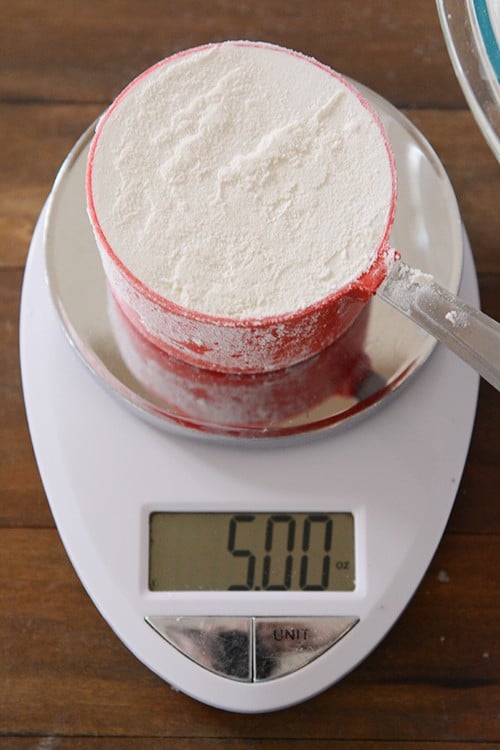 Another common method is to Dip & Shake (or Scoop & Shake) and even though it sounds like a funky, old school dance, it’s actually the flour measuring method you should never, ever use. Here’s why.

After you dip in the cup to measure the flour… 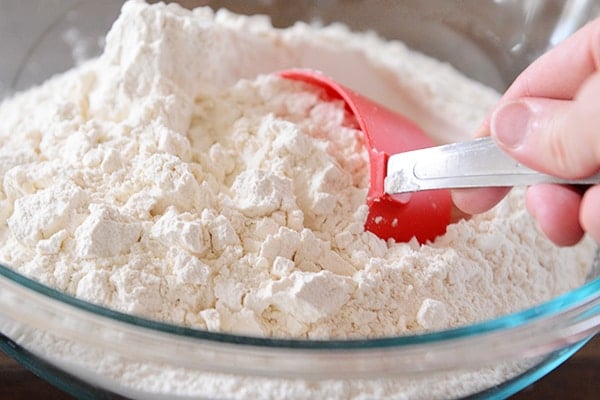 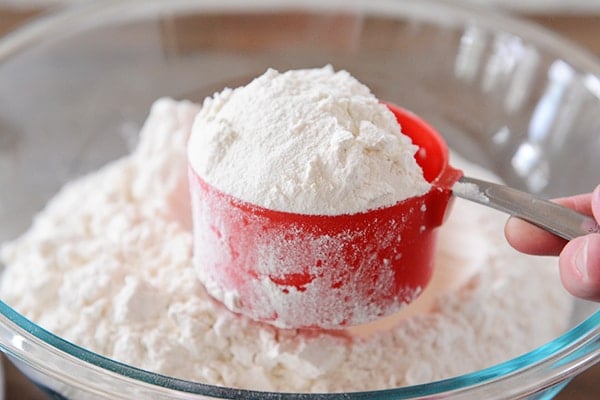 …you might be tempted to take the easy way out (you know, no dirtying an extra knife and all) and shake it down to level. 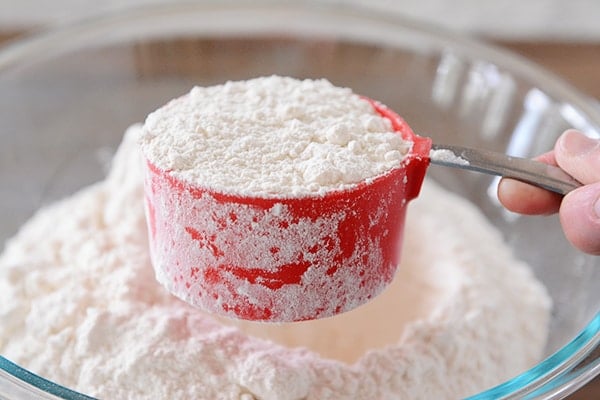 But it doesn’t take a rocket scientist to figure out that by doing this, more flour is getting compressed into the cup. In this case, over 1/2 an ounce more flour is in this cup than in the Dip & Level method.

Half an ounce can make a huge (massive, earth shattering) difference in a recipe, especially if it calls for more than one cup of flour. This cup of flour was used with the aforementioned fluffy flour. It would weigh even more if that cup had been scooped into dense, compacted flour. I’m shivering with dread just thinking about it. 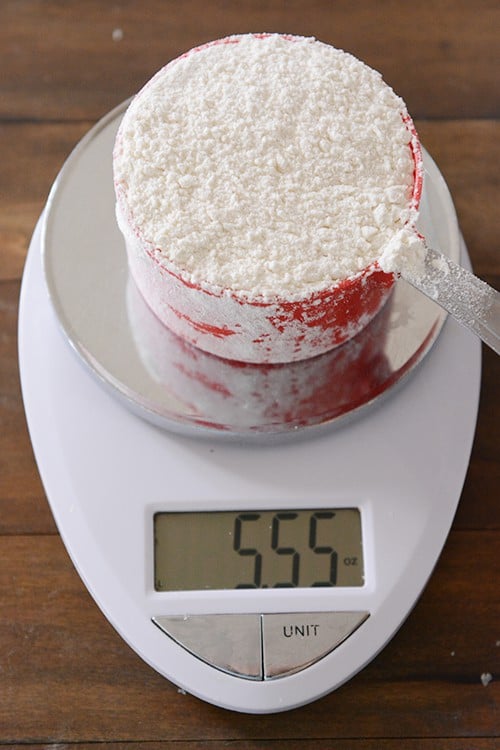 The last method to highlight is the Spoon & Level way. My grandma measured her flour this way. Spoon it in. 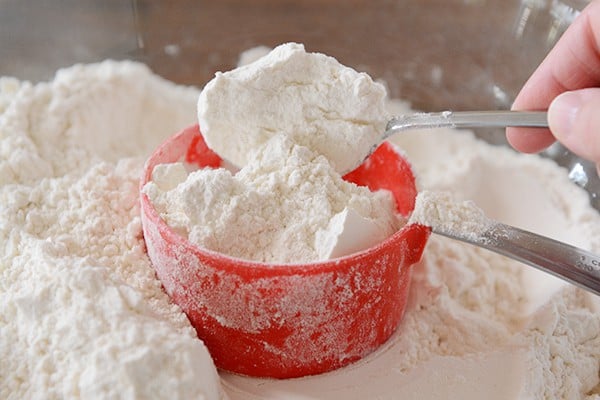 Level it off. And call it good. 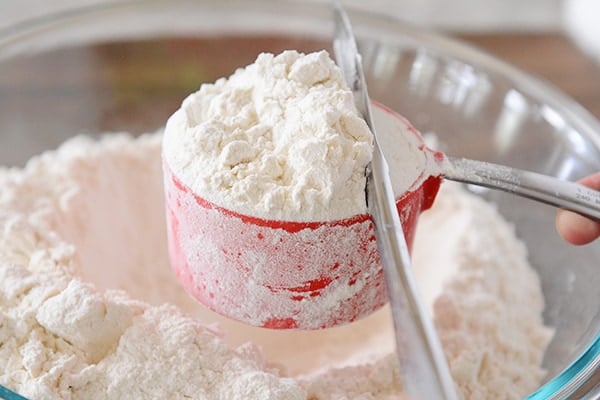 And while it’s a great way to avoid packing too much flour into the cup, you may end up with a notoriously light cup of flour. 4.6 ounces in this case – almost half an ounce the other direction. 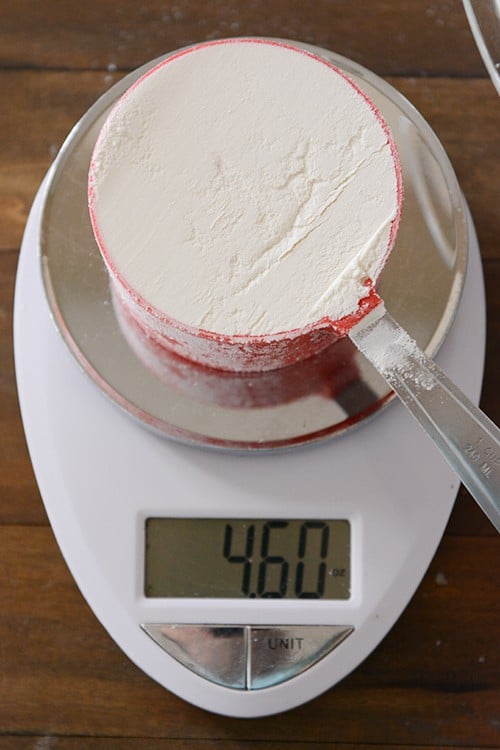 Here it is in one glance. 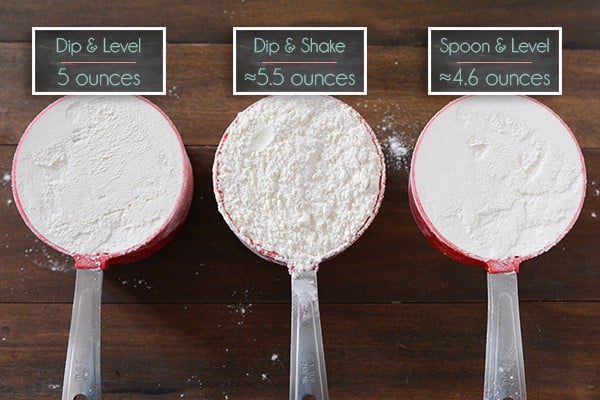 So what does all of this mean?

For me and my blog, it means if you want the very best results from the baking recipes (see a note below about breads, specifically) compiled here, use the dip and level method (if you aren’t already). It’s how I measure flour and the recipes here will be consistent with that method.

Even better, if the recipe uses weights, pull out your kitchen scale (or add it to your wish list!) and use that instead. Just to test it out, if you don’t use a kitchen scale on a regular basis, try borrowing one from a friend or neighbor to quickly see how much a cup of flour you measure weighs. If anything, it will give you a guideline on whether or not to start measuring differently or how to adjust your measuring technique for recipes you are using.

Updated to add: in this post I am highlighting an individual cup of flour and how much it weighs but if you are new to using a kitchen scale or just curious, on an every day practical level, when I’m baking, I don’t measure each cup of flour for a recipe one-by-one like this. I usually place a bowl on the scale, use the tare feature to zero it out, and then add the dry ingredients to the bowl until it gets to the desired weight (this goes for flour, sugar, oats, cocoa, and on and on). If you are adding several different dry ingredients to the same bowl, you can keep using the tare function to add the ingredients together, zero-ing it out everytime to get accurate weights for each ingredient (this will save you from using lots of separate bowls so you feel like using a scale is actually productive and efficient). 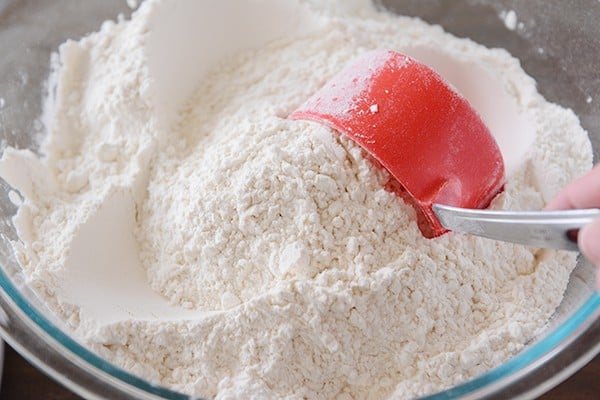 When I use recipes from other sources and weight measures are not included, I always stick to my dip & level method. That’s not to say the recipes turn out 100% of the time (ha!) but unless I know the recipe has been tested using a different method, it’s just what I do. You could always email the blogger/source and ask them how they measure their flour so you can try doing the same when using their recipes.

Too much flour can lead to dense cakes and breads, cookies that don’t flatten at all, and a lot of other problems. Not enough flour could mean gummy or spongy cakes, bread that falls and pancake-thin cookies, among other things.

Updated to add: remember (all my lectures over the years about this should be somewhere present in your mind) that when it comes to yeast breads and rolls and other doughs, I almost never use a specific volume or even weight of flour – based on a million different factors, I go by the texture and feel of the dough. Bread making is it’s own separate animal. The flour info in this post is most appropriate for technical baking like cookies, cakes, brownies, quick breads, muffins, etc.

Because I want you to be a complete rock star in the kitchen (and to kill it with the recipes I have posted here), I wanted to clarify how I measure flour (and I don’t want to sound bossy, but how I think you should measure flour, too).

And. I think that is all.

Who knew I could wax so long and poetic about measuring flour.

And if you are interested in appeasing my curiosity, how do you measure your flour?

As always, this post is unsponsored; I’ve included a few affiliate links in the post above to the kitchen scales I highly recommend and use on Amazon.

Disclaimer: I am a participant in the Amazon Services LLC Associates Program, an affiliate advertising program designed to provide a means for me to earn fees by linking to Amazon.com and affiliated sites. As an Amazon Associate I earn from qualifying purchases.
Let's Talk

103 Comments on “Let’s Talk: How You Measure Flour Makes a Difference” 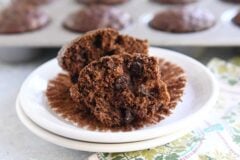 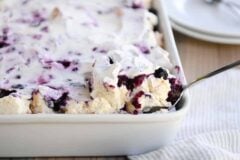