Ever since I hopped on Facebook Live to talk about all things cinnamon rolls, I’ve been inundated with questions about when I am going to finally post the recipe for the pumpkin cinnamon rolls I was making in the video.

To be honest, I wasn’t sure I’d even get them posted today what with life and feeling like I’ve been hit by a bus (dang sore throat). That, and maybe, possibly a tiny bit of blogger burnout. But I powered through. And this pumpkin cinnamon roll recipe can now be part of your life.

Fluffier than all of the millions of fluffy cinnamon rolls I’ve eaten in my lifetime, the pumpkin does magical things to cinnamon roll dough. I don’t think I’ve ever worked with a softer, nicer, kinder-to-me dough in my life, and that makes me happy.

And you know how sometimes cinnamon rolls spread? Get annoying gaps after they bake? And you want to scream in your pillow and throw things and stomp your feet? (I actually address this issue in the FB Live if you are looking for a few solutions…)

Well, you can put the tantrum behaviors aside, because these pumpkin cinnamon rolls are a dream to work with. They’ve turned out perfectly every single time I’ve made them.

They are just really lovable. And your other cinnamon roll recipe (or five) might get a little jealous when they see how much you gush over the new pumpkin kid in town.

The pumpkin spice flavor is subtly delicious. The soft, fluffiness of these pumpkin cinnamon rolls might win over even the staunchest pumpkin hater. I’ve served them to everyone from cinnamon roll snobs to a hungry group of 12-year old scouts returning from a 22-mile bike ride.

Fanatical reception every time (no surprise with the scouts, I know).

Behold, the pumpkin cinnamon roll; this might be the sole reason to start hoarding cans of pumpkin.

How to make these pumpkin rolls ahead of time

This post on making cinnamon rolls ahead of time applies perfectly to any sweet roll…like these pumpkin rolls! 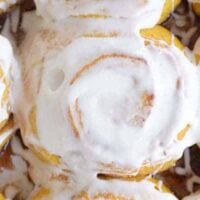 Flour: as with all yeast doughs, take care not to overflour the dough; it should come together and form a soft ball that clears the sides of the mixer without being really stiff. Pumpkin Puree: if using homemade pumpkin puree, you’ll probably need a bit more flour than if using canned. Make-Ahead: this post details how to make sweet rolls ahead of time.
Serving: 1 Cinnamon Roll, Calories: 419kcal, Carbohydrates: 67g, Protein: 6g, Fat: 14g, Saturated Fat: 9g, Cholesterol: 51mg, Sodium: 337mg, Fiber: 2g, Sugar: 34g

9X13-inch Metal Baking Pan
Follow @MelsKitchenCafe on Instagram and show me the recipes you are making from my blog using the hashtag #melskitchencafe. I love seeing all the goodness you are whipping up in your kitchens! 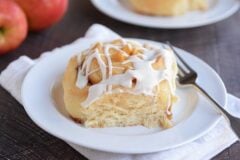 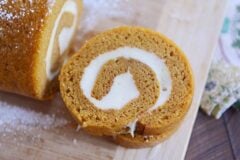 Disclaimer: I am a participant in the Amazon Services LLC Associates Program, an affiliate advertising program designed to provide a means for me to earn fees by linking to Amazon.com and affiliated sites. As an Amazon Associate I earn from qualifying purchases.
Cinnamon Rolls Pumpkin Rolls Yeast Breads