These apple pie cinnamon rolls combine the beauty of apples, buttery brown sugar, and cinnamon into a delectable, fall-inspired roll!

These delectable little cinnamon rolls with apple pie filling were a happy accident last month when I had a huge box of straight-from-the-tree Honeycrisp apples staring me in the face (courtesy of my sweet friend Deb and her mom, Kaye, who brought them all the way from Washington).

We (meaning me, I think I single-handedly devoured about 93% of them) would have had no qualms about eating all of them out of hand (so delicious they taste like candy, truly) but I knew I’d regret it if I didn’t bake at least one fall-inspired treat with the beauties.

Using a slightly adapted version of this light and tender cinnamon roll dough as the base, I went to town sautéing apples in a concoction of buttery brown sugar and cinnamon which resulted in my house smelling better than any Bath and Body works candle.

The whole process was almost derailed when, for the sake of quality control I swear, I tasted a smidgeon of the apple pie filling. Oh heavens.

It’s a miracle any of the glorious apple filling made it into the cinnamon rolls. Which should be a clue that if you just want to ditch making roll dough from scratch and instead eat buttery, sweet and syrupy cinnamon apples straight from the skillet, even burning your tongue in the process, there will be no judging here.

Drizzled with a simple glaze, these warm apple pie cinnamon rolls are divine.

I know you’ll be tempted to curse my name when you are in the process of rolling up the rather saucy mixture of apples in the luscious, soft dough. Curse away. It certainly won’t be the first time and I’m willing to take one for the team.

If you persevere through a tiny bit of glorious baking mess, the result will be worth it. I promise.

How to make these apple pie cinnamon rolls ahead of time

This post on making cinnamon rolls ahead of time applies perfectly to any sweet roll…like these apple pie rolls! 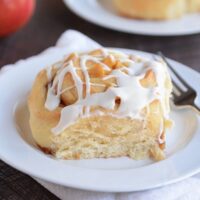 Yeast: if you don’t have instant yeast and want to use active dry, dissolve the yeast in a couple tablespoons warm water with a pinch of sugar. Apple Mixture: it’s really important to let the apple mixture cool to room temperature (chilled is even better). It’s a bit of a messy process rolling it up in the dough – but is much better if the mixture is cooled and not overly warm. Milk: I have best results using 2% or whole milk for this recipe. Make-Ahead: this post details how to make sweet rolls ahead of time.
Serving: 1 Cinnamon Roll, Calories: 450kcal, Carbohydrates: 82g, Protein: 8g, Fat: 11g, Saturated Fat: 6g, Cholesterol: 48mg, Sodium: 298mg, Fiber: 3g, Sugar: 40g 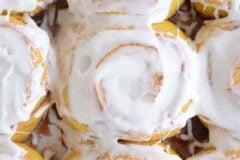 Disclaimer: I am a participant in the Amazon Services LLC Associates Program, an affiliate advertising program designed to provide a means for me to earn fees by linking to Amazon.com and affiliated sites. As an Amazon Associate I earn from qualifying purchases.
Breads Cinnamon Rolls Yeast Yeast Breads