Follow Me:
Home » Kitchen Tips » How to Make Cinnamon Rolls Ahead of Time

How to Make Cinnamon Rolls Ahead of Time

Ever wondered how to make cinnamon rolls ahead of time? This simple and quick tutorial is for you! 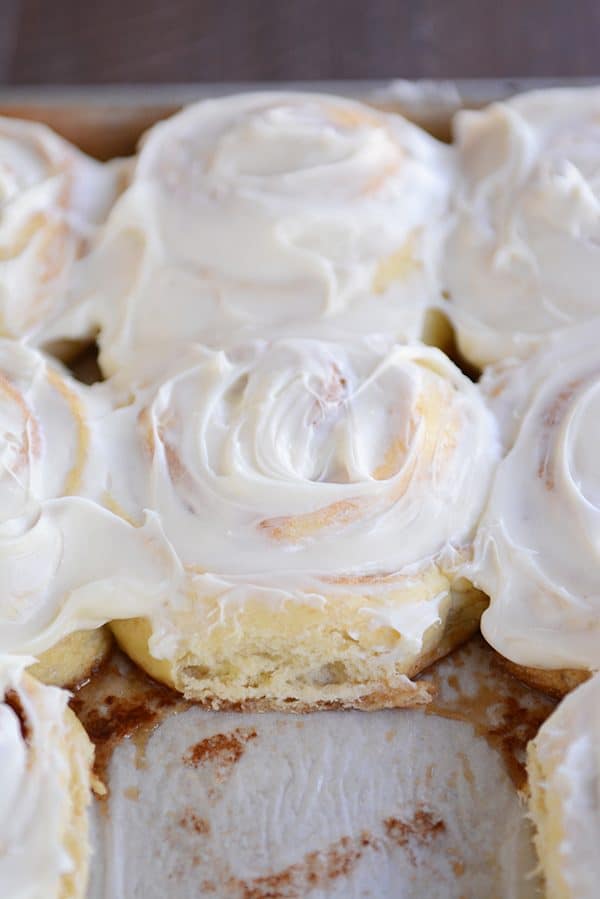 By and large, one of the most frequent questions I get (especially around the holidays!) is:

Can I make these {insert name of favorite cinnamon roll recipe here} ahead of time?

Overnight? Months ahead of time?

As in, give me all the details to ensure fluffy, perfect cinnamon rolls the morning of, please and thank you.

Well, today, I have your back! I’m giving you the down low on how to make cinnamon rolls ahead of time. The simplicity of this process might surprise you.

For the purpose of today’s demonstration, the cinnamon rolls you see pictured are the Yukon Gold Cinnamon Roll recipe (and a few shots of the Vanilla Pudding Cinnamon Rolls). 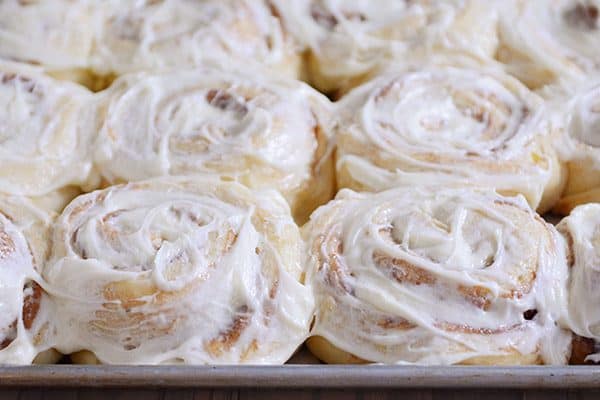 Keep in mind that this overnight/make-ahead method I’m showing you today can be used for most any yeasted roll recipe – sweet or not.

There are just a few little key tricks/tips to keep in mind, and before you know it, you’ll be pulling out piping hot, fluffy, cinnamon rolls and other baked goods in the morning without having to stay up all night…AND looking like a rock star doing it. 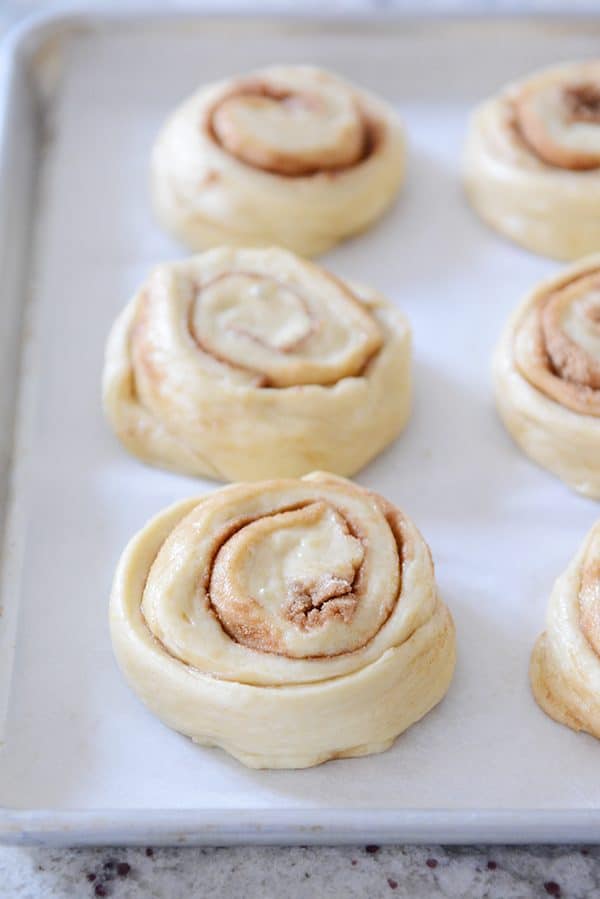 First of all, make your cinnamon roll recipe of choice.

Here are just a few of my favorite cinnamon roll (and other sweet bread recipes). Many of them have step-by-step photos on the post for making the dough, shaping, etc.

Place the shaped rolls on the pan specified in the recipe.

For average-sized cinnamon rolls, I place about 12 rolls per pan with enough space in between the rolls for rising (but close enough that they’ll bake up with sides touching).

And like I mention in many of my cinnamon roll posts, you can see from the picture below that I usually grab the end of the cinnamon roll and tuck it under the roll so they stay nice and tight while baking. 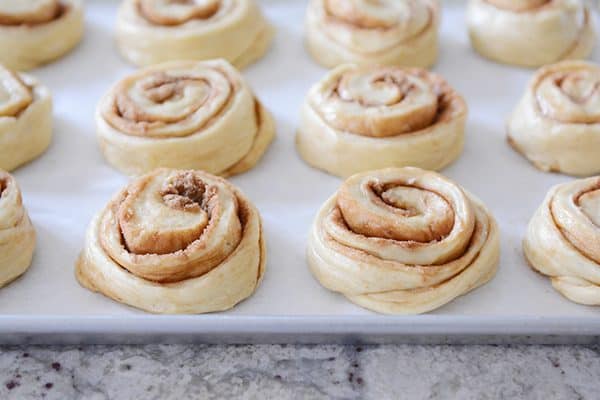 Now here’s an important step: If you are making them ahead of time, don’t let them rise at room temperature right now like you normally would for the recipe!

Instead, cover the pan with lightly greased plastic wrap and immediately pop them in the refrigerator. 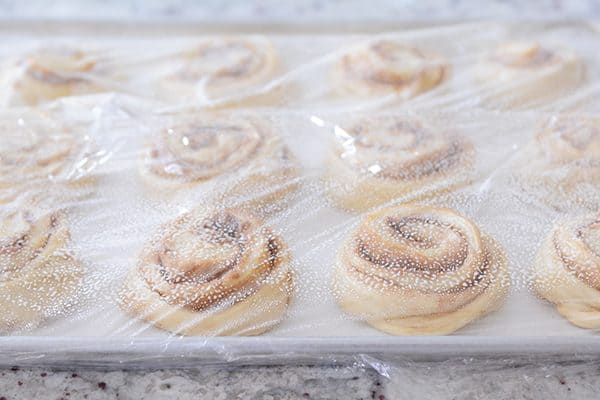 They can stay in the refrigerator for up to 24 hours (the longer they are refrigerated, the more the filling might liquify and seep out of the rolls – that may happen to a minor extent anyway, so don’t panic). 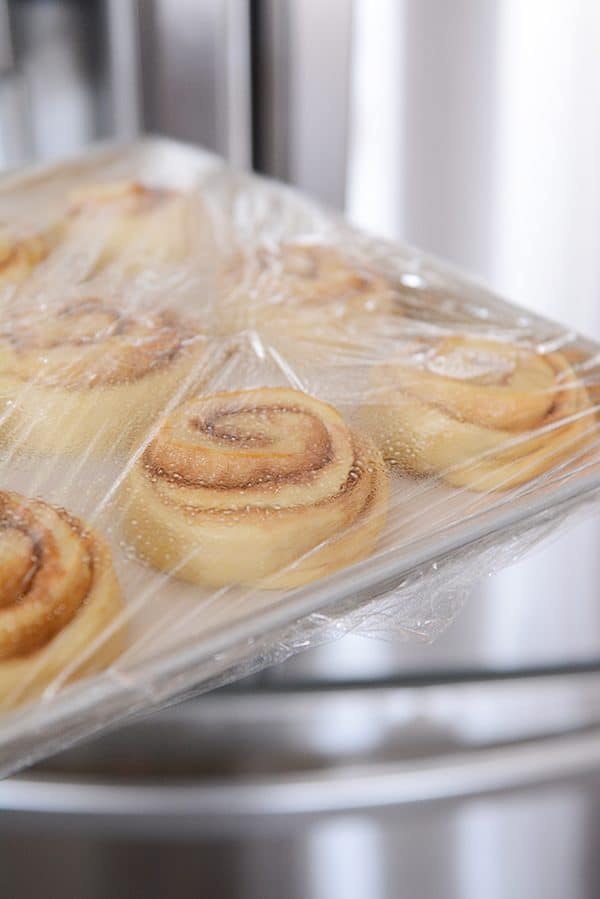 A note about freezing:

At this point, you can freeze the unbaked rolls instead of refrigerating.

Disclaimer: I hardly ever freeze unbaked sweet breads or rolls because of a hack my Aunt Marilyn taught me that I’ve mentioned before. I like to bake and frost the cinnamon rolls and then place individual cooled rolls each in a quart-sized freezer bag. Seal (yes, it’s a little messy) and freeze.

When ready to eat, remove the roll from the bag (it’s easier than it seems – it will pop right out!) and warm on a plate in the microwave for 1-2 minutes. Hot, fresh, single-serve cinnamon rolls whenever you like. Dangerous!

If freezing, I recommend freezing the large tray of rolls until completely frozen and then popping the rolls off the tray and into a freezer bag (mostly to save space in the freezer). However, you can leave them on the tray (I suggest a layer of foil over the plastic wrap to prevent freezer burn) and thaw the tray as a whole when ready.

I also find that sometimes the yeast flavor can be more pronounced after freezing and then thawing and baking. I don’t recommend keeping them in the freezer any longer than 3-4 weeks.

Back to the refrigerator method.

A lot depends on the recipe, but you’ll probably notice that when you take the rolls out of the refrigerator to bake, they’ll look puffier and more risen than when they went in.

Sometimes they’ll rise a lot, sometimes hardly at all. Varying factors: recipe used, warmth of the dough, time in the refrigerator, temperature of the fridge, etc. 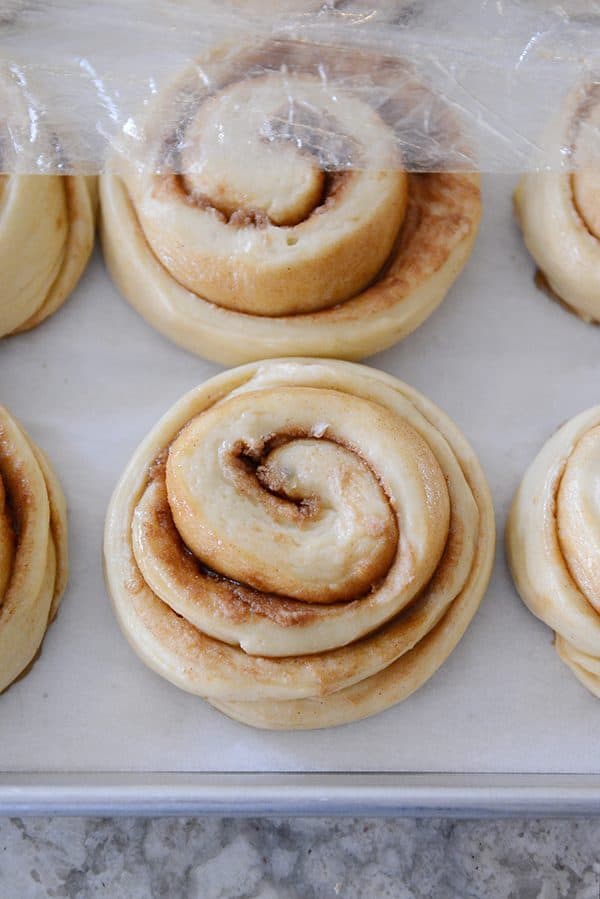 Take the rolls out in time to come to room temperature and fully rise before baking.

Usually that means the rolls need to have time to double in size from the original shape (for most recipes) before they go in the oven.

In my kitchen, that generally takes about 2-3 hours after they come out of the refrigerator, give or take.

Once they’re ready, remove the plastic wrap and bake them according to the recipe! 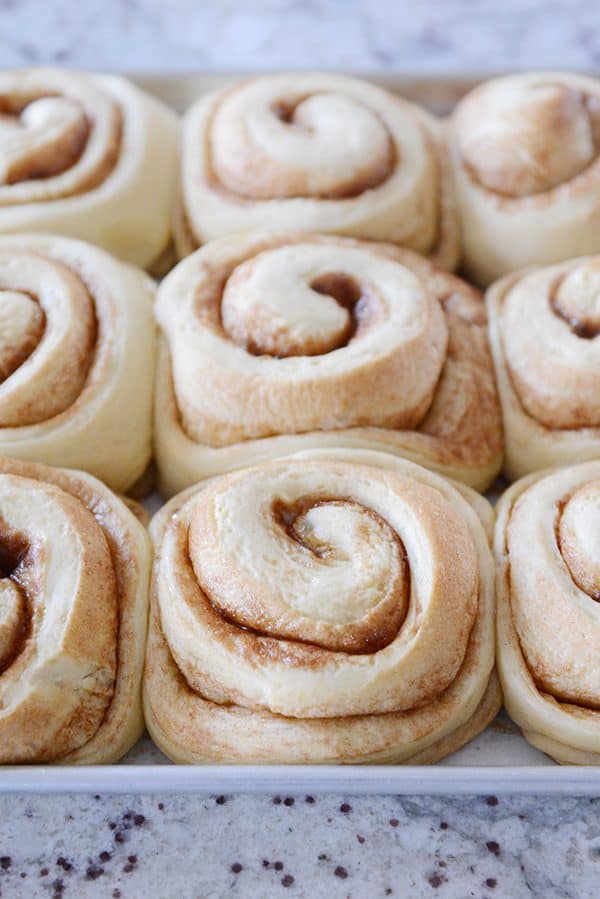 Here’s one extra hack I’ve used when I don’t want to get out of bed at 4 a.m.

You know, for those mornings when cinnamon rolls need to be baked, frosted and edible by 7:30 or 8:00 a.m.

Sometimes, instead of taking them out 2-3 hours in advance, I take them straight out of the fridge, take off the plastic wrap, and pop them in the cold oven so they can do a “quick come to room temperature and rise” while the oven preheats.

I still bake them for about the same amount of time in the recipe (starting the time after the oven has preheated), but if you’re new to this method, I’d recommend checking on them a minute or two early, because each oven operates a little differently temperature-wise.

This lazy method isn’t completely foolproof. A lot depends on your oven, if it preheats in a standard way or if it has a “rapid preheat” function (that won’t work quite as well).

It also doesn’t produce maybe the same degree of light and fluffy cinnamon roll that the slow rise will do, but I might be the only one to notice the negligible differences. My family has never noticed a thing (shocker!).

For true, I-need-to-look-like-a-rockstar-occasions, I employ the ol’ set my alarm and drag myself out of bed early plan (or just make sure I don’t have to have cinnamon rolls ready by 8 a.m!). Sometimes the ultimate sacrifice of sleep is worth it, but I’m not going to lie, this easy hack has saved me a couple times, too. 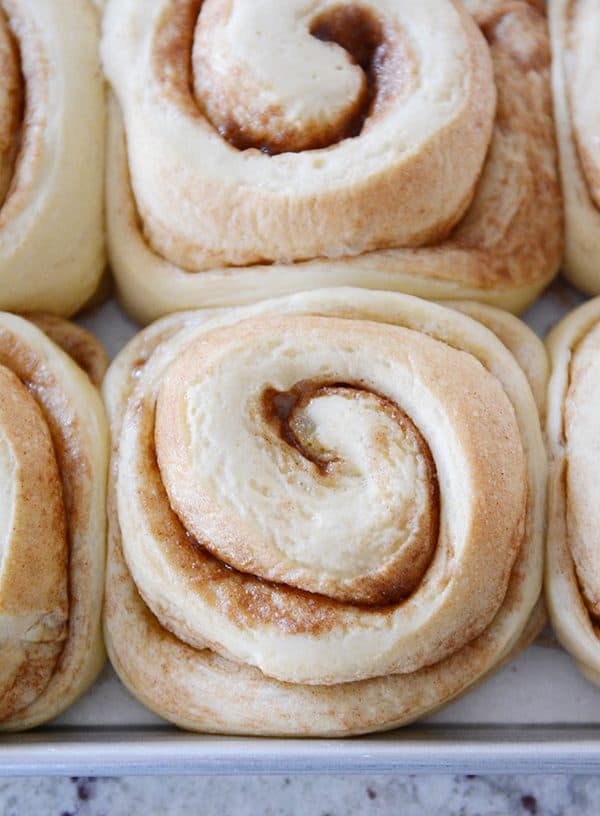 I know all this info about how to make cinnamon rolls ahead of time isn’t really rocket science type stuff. Most of you probably already follow a similar method.

But I thought it would be handy to have a placeholder tutorial like this so that when I get questions…or when you wonder about the meaning of life and cinnamon rolls…I have a easy, helpful place to point you.

Now what are you waiting for!

And as always, leave any additional questions or comments below. I’ll add to this tutorial, if needed, as questions come up! 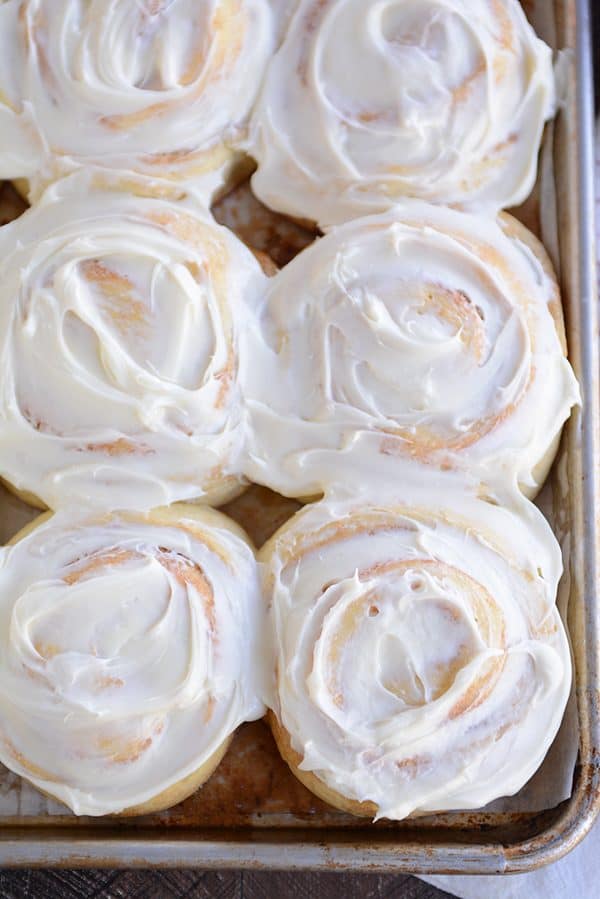 And one more time, in case you missed it, here’s that handy dandy list of my favorite sweet roll recipes:

104 Comments on “How to Make Cinnamon Rolls Ahead of Time”