Hands down, this is the best ham I’ve ever had in my life, and I can almost guarantee it will be the same for you. With a completely out-of-the-box cooking method, ham has never been this tender or this delicious!

Does the world really need another recipe for ham? Ham is ham. Right?

How many ways can you really recreate Easter ham, especially when you have a fabulous slow cooker version and an equally fabulous classic version. I mean really.

Well, when your awesome friend, Mel, who has some of the best food judgment ever, sends you a recipe for sweet baked ham, stating it is the best ham ever, you decide you definitely have room in your heart for another ham recipe.

You guys. I have never had ham like this. Ever. I don’t even know how to describe it in a way that will convince you it’s life-changing. It is incredible.

Here’s where this ham recipe differs from every other traditional baked ham recipe out there.

You take a bone-in ham (not spiral sliced!) and boil it in two parts water to one part white vinegar for a few hours. Stick with me here, because I was skeptical, too.

You definitely want to use a large pot that can accommodate the ham AND the liquid (you’ll need vinegar and water to cover). A lot will depend on the size of ham you have.

What type of ham to use

For this recipe, there are two factors that are really important:

I usually look for shank hams – that’s what my grocery store carries that fits this criteria. Bone-in and unsliced.

As the ham cooks in the vinegar/water mixture, the meat becomes super tender. Like, fall off the bone tender.

Yes, your house will smell like vinegar. It’s not the worst thing in the world, but if it bothers you, open a window and turn on the vent above your stove, or do what my friend Mel does and use an outdoor propane stove (pretty good idea if you have one).

The exact cooking time will depend on the size of the ham and how high the heat is during cooking, but you want to cook the ham until it is so tender, it’s basically shredding itself for you.

I let the ham cool until I can carefully extricate it from the pot and put it on a sheet pan or a large cutting board. (The sheet pan is nice because it contains all the juices.)

And then I pull the meat off the bone and shred into pieces.

This step can be done several days ahead of time! Cook the ham, shred it, and place the meat in the refrigerator until you are ready to assemble and bake.

When ready to bake, layer the ham with a mixture of brown sugar and dry mustard.

The shredded ham bakes for about an hour. It’ll come out of the oven tender as can be coated in a succulent, sweet sauce that contrasts beautifully with the tangy ham.

This sweet baked ham is unbelievably delicious, it’s unreal. I promise I’m not overselling this. It’s amazing. I’ve been making ham this way for years now, and it’s the only way we like our Easter ham anymore!

If you want a new ham recipe to knock the socks off you and your guests, this is the one. 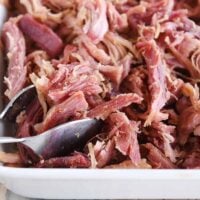 Ham Type: do not use a pre-sliced/spiral sliced ham. It will be very, very dry. Look for a cut of ham that is not sliced and still has the bone-in. The best cut I’ve found is a butt or shoulder cut (might be labeled shank, also). Ham Size: you can make a larger ham than 5-7 pounds; you’ll need a larger pot to accommodate the ham (and will increase the sugar/mustard mixture accordingly). My friend, Mel, that gave me the recipe, boils her ham in a huge pot outside on her propane stove (like a camp chef-type stove). I only had my classic stovetop available and used my biggest pot with the 5-7 pound ham. Make-ahead: the ham can be boiled and shredded a few days in advance of baking. It can also be assembled with the brown sugar mixture a day ahead of time. Cooking Time: take care not to boil the ham TOO long or you’ll end up with ham jerky and you don’t want that. If you are worried about time, err on the side of taking it out at 2 hours (even if it means you are having to cut part of the ham away from the bone instead of it falling away). It should still be very tender.
Serving: 1 Serving, Calories: 427kcal, Carbohydrates: 22g, Protein: 43g, Fat: 18g, Saturated Fat: 4g, Cholesterol: 166mg, Sodium: 2626mg, Fiber: 1g, Sugar: 21g

Recipe Source: from my friend with impeccable food tastes, Mel B. 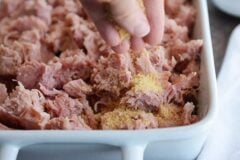 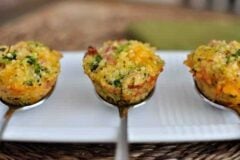 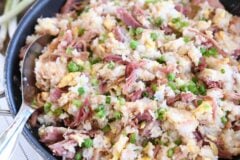