Follow Me:
Home » Friday Thoughts » The Parable of the Cheeseball

The Parable of the Cheeseball

I wasn’t planning on sharing another post before the holidays, but last night I felt like I wanted to share this story that happened last year. And so, here I am. I’m calling it The Parable of the Cheeseball. {I’m sharing the following story with my friend, Fern’s, permission.}

As many of you know, for many years, my family has made and delivered cheeseballs as gifts to neighbors/friends, etc, for the holidays. It’s become a tradition that I think will last forever. And it’s hilarious to see how excited some of the “regulars” on our list get as the holiday season approaches. Starting early December, I have to carefully and somewhat warily walk down some hallways at church afraid I might be accosted by the energetic souls wondering eagerly when the cheeseballs will be delivered this year. Haha. 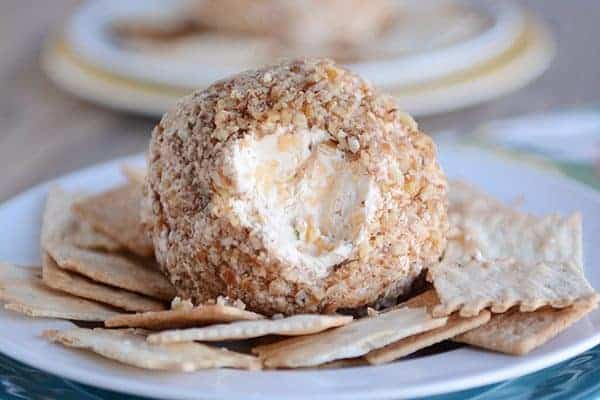 Last year, however, something unintentional happened with this cheeseball tradition.

There was a family at our church going through some tough things. We knew this family a little bit – our kids are in some of the same grades, and we interacted with them here and there at church and school events. Their mom, Fern, had just undergone a major and very invasive brain surgery and was at home beginning a very, very long recovery. She was in severe pain. She could barely get up and move out of bed due to lethargy and pain and risk of falling. Not only that, she could hardly eat because part of her jaw had been cut during the brain surgery and was healing, but she couldn’t open her mouth very far at all and could only eat really soft foods.

This sweet family had been in our prayers for weeks. One night close to Christmas, it was fairly late in the evening. Maybe 9-ish. Too late, really, to be considered appropriately polite to drop something off at anyone’s house. But we were in major cheeseball mode and all social norms had flown out the window in the face of cheeseball delivering.

Brian and the kids had one last cheeseball on their tray for delivery, and Brian called me and said “I think I’m going to take this up to Fern and her family.” We had never delivered a cheeseball to Fern and her family in years prior because we hadn’t known them previously. They didn’t even know we did this sort of thing. I suggested that it might be too late, but Brian insisted that he wanted to deliver this one last cheeseball.

So he and the boys drove up to Fern’s house and dropped off the cheeseball. And that was that. We didn’t think much more of it (other than me delivering a mildly grumpy look at Brian when he got home because I still felt like I was in the right and he was in the wrong, and sometimes just shooting someone a dirty look makes me feel better – amiright?? – even though I know that is the opposite of how one should behave during the holiday season).

The next day, a text message popped up on my phone. It was from Fern. And this is what it said: 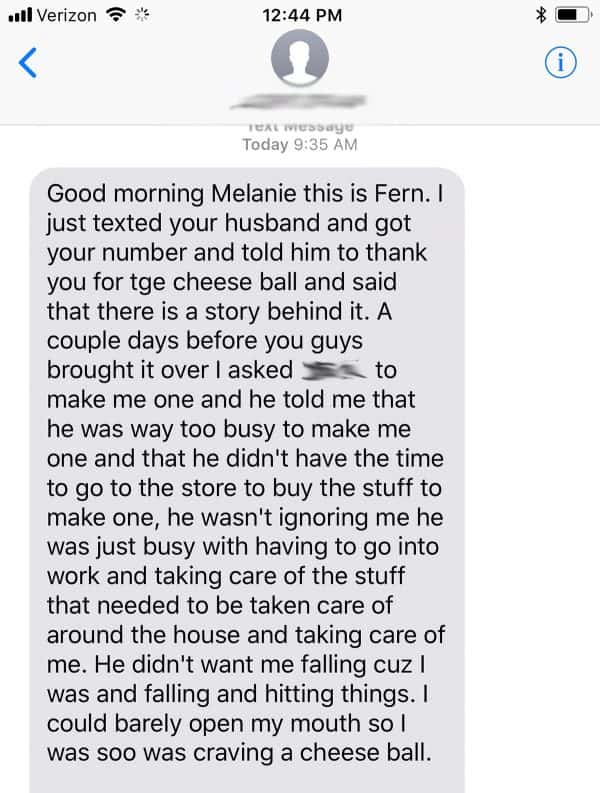 “Good morning, Melanie this is Fern. I just texted your husband and got your number and told him to thank you for the cheese ball and said there is a story behind it. A couple days before you guys brought it over I asked [my husband] to make me one and he told me that he was way too busy to make me one and that he didn’t have the time to go to the store to buy the stuff to make one, he wasn’t ignoring me he was just buy with having to go into work and taking care of the stuff that needed to be taken care of around the house and taking care of me. He didn’t want me falling cuz I was and falling and hitting things. I could barely open my mouth so I was soo craving a cheese ball.” 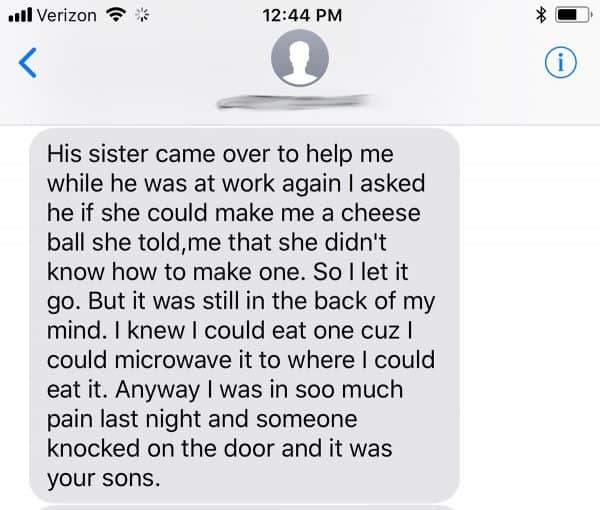 “His sister came over to help me while he was at work again I asked her if she could make me a cheeseball she told me she didn’t know how to make one. So I let it go. But it was still in the back of my mind. I knew I could eat one cuz I could microwave it to where I could eat it. Anyway I was in soo much pain last night and someone knocked on the door and it was your sons.” 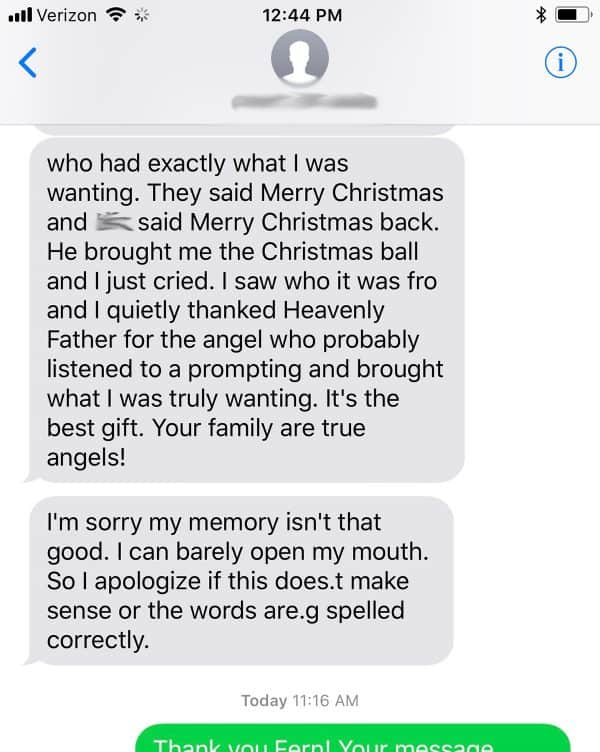 And you guys, in that instant, I was humbled beyond words and brought to some serious tears. Humbled because I had been mildly irritated and a little too free with the dirty looks the night before when Brian and the boys wanted to deliver this “one last cheeseball” too late in the evening and humbled because it seemed that a tremendously loving God above was working through my little family to help someone in need even though we had no idea.

We didn’t know that Fern had been praying for a cheeseball, of all things. It certainly wasn’t hard for us to drop off the cheeseball that night. In fact, we didn’t think much of it. But that simple holiday tradition that led to the prompting Brian had to take that “one last cheeseball” meant something to Fern. In that instant, it was so, so much more than just a delivered cheeseball.

I guess I felt like I wanted to share that simple story to say that sometimes the things we do may not have an impact on us in the moment of doing/giving them, but we never know, we never, ever know, what impact those small and seemingly simple things may have on others.

A delivered cheeseball. A text to randomly check in on someone. A side hug in the hallway at church or the grocery store. A loaf of bread dropped off on a doorstep. Just simply noticing someone that you don’t normally interact with and starting up a conversation.

Never ignore a prompting to reach out to someone. Even if it’s late at night and you might get a dirty look from your mom. 🙂 Even if it comes in the middle of a crazy, chaotic holiday season. And even if it takes you a bit out of your comfort zone.

I’ve been on the receiving end of small acts of service more times than I can count, and I remember them all; each one has burned a lasting warmth into my heart that blossoms every time I think of the person or event. Because others have quite literally changed my life through service, it makes me want to be a better human, a more giving person who allows myself to be open to direction that I may not even be intentionally seeking at the time. And it makes me so very grateful for the tender mercies of a loving Heavenly Father who sees all even when we are limited in what we see and understand.

That’s what this holiday season is all about, really. Giving in the truest way we can from the very depths of our heart, even if that giving comes in the rather rustic form of a cheeseball wrapped in a cellophane bag delivered by a couple young kids who have no idea what that cheeseball really means (and incidentally, neither do their parents).

Come to find out, Fern also looooooooves no-bake cheesecake (clearly she’s good people, haha!). This is very valuable information for someone like me who wants nothing more than to show my love for people through food. Especially when there’s some trading involved! (Fern made this adorable tiara and wand for Cam’s birthday last year, and I paid in cheesecake…now thats my kind of a deal.) 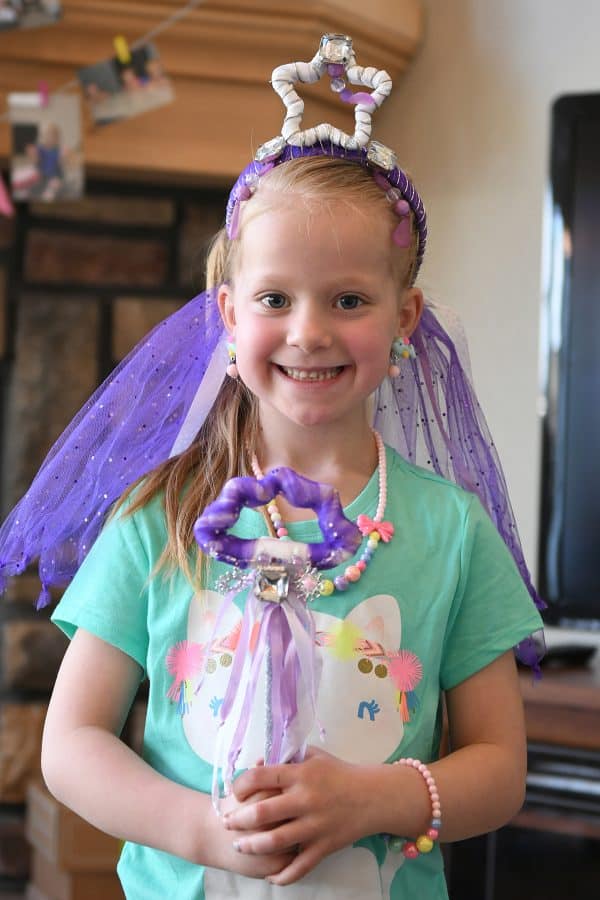 And I suppose that’s about all I have to say about that. What I know is that the making and giving of cheeseballs has taken on a symbolism and meaning that will stay with me forever.

I know we don’t all celebrate and believe the same things. But with all the tender feelings that fill my heart this time of year, I just want to say that I very sincerely wish you the love, happiness, and peace that you may desire and need this time of year and always. Nothing I do, not one single thing, would have any lasting value if it weren’t for my belief and unending reliance on my Savior, Jesus Christ. His birth, His life, His constant, unconditional love is truly the reason…and the path forward…for ALL the seasons I will ever pass through in this life.

Thank you for allowing me a rather sentimental post today. I’m so grateful for you, my very favorite virtual friends near and far. I wish you the very happiest of holidays.

128 Comments on “The Parable of the Cheeseball”