Pomegranates rank among some of my favorite fruits but they aren’t as easy to eat as, say, a strawberry that you can simply pop in your mouth after de-greening.

In order to enjoy the deliciousness of a pomegranate, here is a simple way to get the seeds out.

First, take the pomegranate and place it on a cutting board. Have a knife ready and waiting. 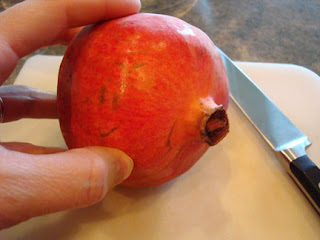 Take the knife and slice the crown off of the pomegranate – the crown is the part with the knobby, belly-button-looking-thingy on top. 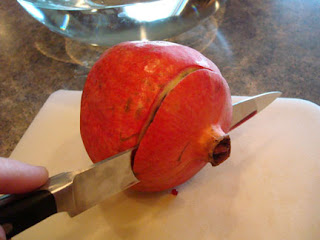 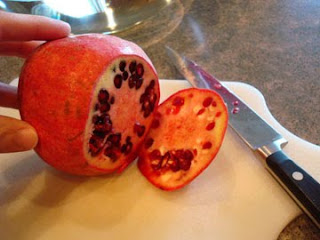 Next, take your knife and score lines in the peel of the pomegranate, slicing part way into the pith (the white part). 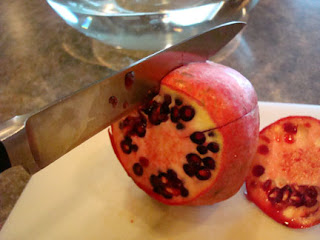 You’ll want to make about five or six cuts into the pomegranate. I didn’t pay attention like I should have, but if you are really cautious, your slices will go inbetween the natural sections of the pomegranate so that less seeds are sliced in the process. 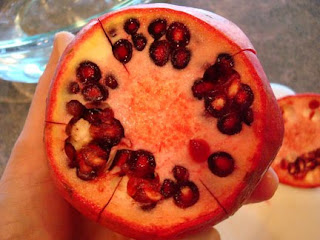 After the pomegranate has been scored, place it cut side down in a bowl of cool water and let it soak for about 10 minutes. This helps soften the pith and helps the seeds release a little easier. 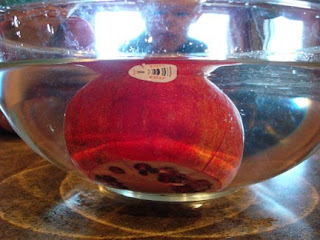 After the pomegranate has soaked for the allotted time, get your hands in there (two hands if you aren’t trying to take pictures of the process) and start pulling apart the sections that you scored earlier. 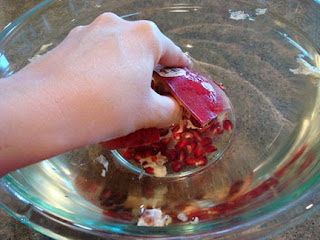 Keep at it, gently pulling the peel and pith away from the seeds, gently rubbing the seeds off with your fingers until most of the seeds have been released from their captivity. 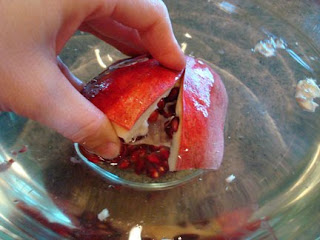 As you do this, you’ll be left with a great science experiment to teach your toddlers. The heavy pomegranate seeds have sunk to the bottom while the lighter, flimsy pith and peel have floated to the top. 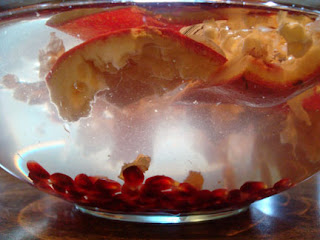 Using a slotted spoon (not pictured) remove the floatage from the top of the bowl and gently remove any pith still attached to the seeds. 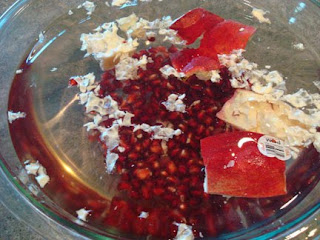 Drain the water and admire your beautiful bounty of pomegranate seeds! 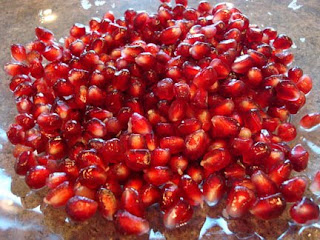 12 comments on “Tutorial: Seeding a Pomegranate”