Creamy, light and so delicious, these lemon white chocolate cream bars are going to be the best dessert of summer. I’m calling it now. They’re amazing!

Not only do they hit strong and true in the lemon department, but the creamy cheesecake layer and buttery graham cracker crust help make these an absolute showstopper of a dessert.

Since I already have a thing for lemon and white chocolate in desserts (this cheesecake and these brownies, for instance), these bars were bound to be an instant favorite.

As someone who has a professed distaste for white chocolate in its purest form (team dark chocolate forever and ever), you might be wondering why I add melted white chocolate to some of my favorite desserts?

Well, adding white chocolate adds sweetness, richness and extra creaminess without an overwhelming white chocolate flavor. The delicious effect is really quite remarkable, especially in a simple no-bake cheesecake batter like this.

While the recipe may seem a bit long with those three separate parts, it actually comes together without a lot of fuss.

The easy graham cracker crust gets baked until set, cooled, and then topped by the luscious white chocolate creamy cheesecake layer.

After the cream layer goes on, refrigerate the pan until further notice. We need to tackle that lemon layer.

Lemon Layer for the Win

The lemon layer is a simmered and thickened mixture of:

I played around with several variations of these bars, trying to get the cornstarch amount adjusted just right so the lemon layer was thick and set up without being too gelatinous.

After simmering, it will be thinner than pudding, but it should be thick enough to coat the back of a spoon.

Off the heat, stir in the butter, lemon zest, and a small drip of yellow food coloring (this is optional), and then pour the mixture into a bowl, press plastic wrap on the surface, and chill until cooled completely but still spreadable.

Spread the lemon mixture over the cheesecake layer and chill again until fully set up. The lemon layer will have the consistency of soft jello when it has set up all the way.

The yellow food coloring in the lemon layer is optional. It doesn’t affect flavor, but it does add a more pronounced yellow color. Basically, it’s for looks only.

(Incidentally, the bars on the left were also made with lowfat cream cheese, and you can see how it affects the fluffy texture of the cream/cheesecake layer; I highly recommend using full fat cream cheese for this recipe.)

And if you’ve ever wondered how lemonade would fare next to  a creamy cheesecake and sweet crust, I can tell you it fares very well. Very well indeed.

As with all desserts like this, I’m already wondering what sort of possibilities we can dream up for variations. Lime or key lime is a no brainer. What about lemon blueberry? Grapefruit?

I’m counting on you guys. You always come through with the best suggestions and variations.

Until then, I hope you find time and a reason to make these lemon white chocolate cream bars! They really are amazing and would make the best dessert for summer entertaining (or just staying at home!).

Can I use lowfat cream cheese?

Can these bars be frozen?

I haven’t tried freezing them, so I’m not 100% sure, but I think they’re probably best made and eaten within a couple of days and not frozen (baked cheesecake freezes well, but I’m not sure how no-bake cheesecake desserts freeze). The good news is they can be made a day or so in advance and refrigerated.

Can I substitute another cookie or cracker for the graham crackers?

You can try using a shortbread cookie or a “nilla wafer” type cookie. Either should work fine!

Food Coloring: the yellow food coloring is completely optional. In the post, there's a side by side picture of the dessert made using yellow food coloring in the lemon layer and without. If you want a vibrant yellow layer that screams lemon, a drop of food coloring will help. Otherwise, the topping will be pale and somewhat colorless (tastes delicious either way).

Heavy Cream: for this recipe, I add the heavy cream unwhipped directly to the batter and it thickens as it mixes with the other ingredients. I use 40% fat heavy whipping cream from Costco. If you are using heavy cream with a lower fat percentage, you may need to whip it to soft peaks before folding into the cream cheese mixture.

Recipe Source: adapted from this recipe at Jamie Cooks It Up (changed the crust, altered ingredient amounts for the lemon layer, etc) after Bri H. (a longtime MKC reader emailed me and told me I had to make it ASAP) 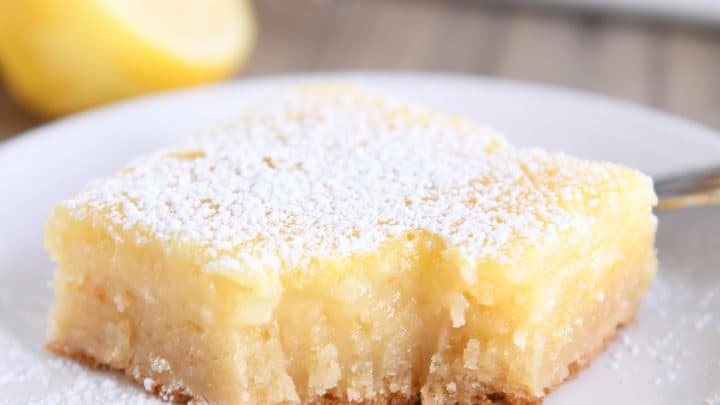 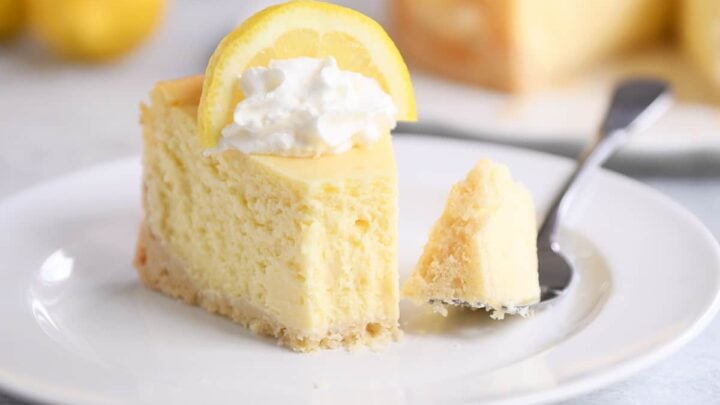 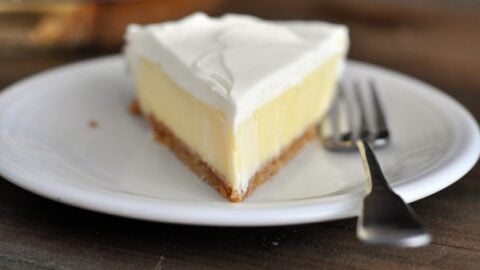 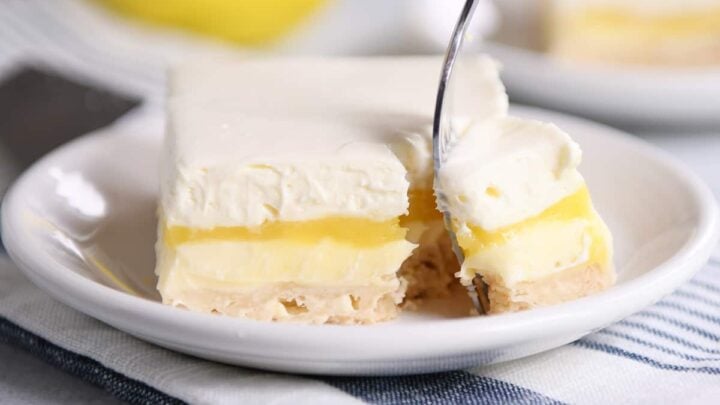