Hello! Welcome back from all the chaotic gloriousness of the Christmas holiday! I hope you had a great weekend; our holidays were filled with lots of PJ’s, lots of lego-building, lots of movies, lots of food.

We had a few, shall we say, issues, over the break, like freezing water leaking inside through our kitchen windows (home improvement catastrophes bite big time) and our family car dying a slow death.

But…if there’s one thing I’ve learned in my long 3.8 decades of life, it’s how to sort of roll with the punches (even if it includes screaming in my pillow every once in a while and consuming large quantities of dark chocolate).

Thankfully Camryn scored a My Little Pony umbrella for Christmas (her only Christmas wish), and so she felt very well prepared to step in and help shield Brian’s head as he crouched in the kitchen trying to figure out why water was streaming in from outside. Cam to the rescue (theme of our family’s lives, especially when it comes to breaking up wrestling matches between brothers).

I was really hoping to share this cinnamon roll recipe with you before Christmas, but instead, let’s pretend like cinnamon rolls are THE breakfast to make on New Year’s Day! Or New Year’s Eve?

Or maybe just tomorrow. Because Thursdays are awesome, too.

I love traditional cinnamon rolls. That adoration is very apparent based on the number of cinnamon roll recipes I’ve posted over the years. I love ’em. I do.

But these flaky, tender biscuit cinnamon rolls…they have completely taken my cinnamon roll-loving world and flipped it upside down.

I showed you them on Instagram, and you went crazy (for good reason). I’ve made them no less than a dozen times since then because my family (and the scads of people I’ve shared them with) absolutely cannot get enough.

They are so fast. And so easy. And they can be made days in advance (or even longer if you freeze them).

A huge thanks to my virtual friend, Laurel, for giving me the idea for these rolls (actually she and I met in real life a couple years ago when she cheered me on when I ran my half marathon and I hugged her at BYU in November when I spoke there – so let’s rephrase: my real life friend).

She makes biscuit cinnamon rolls every morning at the bakery she works at. She makes them often enough and loves them so truly that she confessed on Instagram a while back she’s never made classic, yeast cinnamon rolls.

I kind of thought she was missing out. I mean, how can you NOT make a fluffy, sweet, traditional cinnamon roll when they are so terribly delicious?

The minute I tried my hand at biscuit cinnamon rolls…and even better…the very second I ate one of these amazingly tender and flaky cinnamon rolls, I understood.

Using a homemade buttermilk biscuit dough and sweetening it up just a little is pure cinnamon roll brilliance.

I honestly have been making these right and left.

They are such a no-brainer when you want a delicious cinnamon roll fix but may not have the time to let dough rise or figure out how to time the rising and baking for a warm breakfast.

Although, admittedly, it isn’t that hard with traditional cinnamon rolls, as you and I have discussed hundreds of times in the comments of all my cinnamon roll recipes – I’m just really trying to sell you on these biscuit babies.

Cinnamon rolls are a fairly standard Christmas morning breakfast around here – with some other deliciousness thrown in there over the years.

I even made them 2 1/2 days in advance when life was a little less crazy, popped them in the refrigerator, and baked them up in 20 minutes flat the morning of (bless the fact that they didn’t require any rising).

Quick sidenote, he actually told me the other day, in shocking fashion, that he doesn’t like the maple frosting on these glorious cinnamon roll standbys; I legit had a moment of “who am I and how did I get here” because…I mean…how could he?

But we’re healing and moving on like real adults.

Anyway, he, Brian, looooooves these biscuit cinnamon rolls. And based on the above revelation, I have no doubt now that he would tell me his true feelings.

It’s hard not to love them. They are buttery and flaky and soft and perfect.

Because I’m kind of anti-doughy anything…these divine cinnamon rolls speak to my soul. I’ll never turn my back on a classic cinnamon roll (unless it’s doughy, of course), but this biscuit version has won my heart.

If homemade biscuit dough stresses you out, never fear! It’s not hard (especially if you have a food processor…and simple, even if you don’t).

I’ve included a step-by-step picture guide below the recipe to show you the ins and outs of transforming the dough from a shaggy mess into deliciously divine cinnamon rolls.

Equipment I use for this recipe:
-My trusty Breville food processor (love this thing to the moon and back, especially after I had two Cuisinart food processors die on me)…I’ve also used my pastry blender when making by hand with great results
–OXO Bench Knife/Scraper (best thing for cutting these bad boys into rolls in my opinion)
-Little pastry brush for butter spreading (although….shhhh…you can just use your fingers, too)
-One of these all-purpose sheet pans 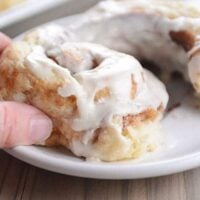 Buttermilk: I usually champion the homemade buttermilk solution, but it has failed miserably when I’ve used it in this recipe (dough too wet, rolls flattening while baking). I think it COULD work, but I’d suggest using a modified homemade version: half sour cream and half milk to equal the amount in the recipe so it’s a thicker homemade buttermilk than just adding lemon juice to milk. Make-Ahead: this post details how to make sweet rolls ahead of time.
Serving: 1Cinnamon Roll, Calories: 346kcal, Carbohydrates: 47g, Protein: 5g, Fat: 16g, Saturated Fat: 10g, Cholesterol: 42mg, Sodium: 502mg, Fiber: 1g, Sugar: 17g

Pastry Blender
Follow @MelsKitchenCafe on Instagram and show me the recipes you are making from my blog using the hashtag #melskitchencafe. I love seeing all the goodness you are whipping up in your kitchens!

Disclaimer: I am a participant in the Amazon Services LLC Associates Program, an affiliate advertising program designed to provide a means for me to earn fees by linking to Amazon.com and affiliated sites. As an Amazon Associate I earn from qualifying purchases.
Breakfast Cinnamon Rolls Quick Breads