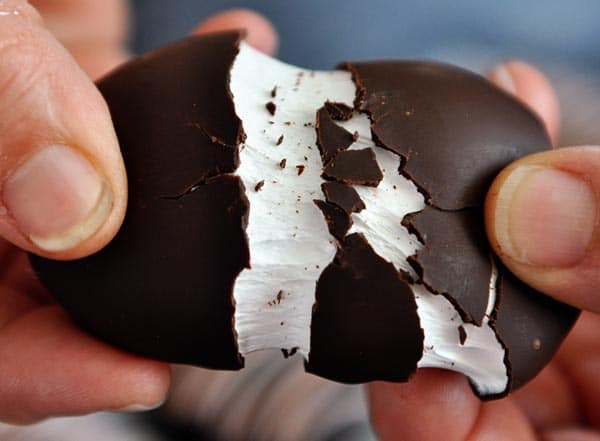 I’m not 100% positive but these homemade marshmallow Easter eggs (chocolate-covered, no less) may just be one of the coolest things I’ve ever made. Ever.

I know some of you are total rock stars and have been doing homemade marshmallows for, like, centuries, but I’ve just never really seen the point.

Until I decided I wanted to make homemade marshmallows in an Easter egg shape and cover them with chocolate. Now that’s something I can totally get behind.

First of all, my Aunt Laurie is totally responsible for these babies. She’s famous for her marshmallow eggs in her Idaho town (hello, Rexburg!) and I’m guessing she makes hundreds of these every year.

So in other words, she’s a chocolate-covered homemade marshmallow Easter egg expert.

Is there really any other kind of expert to work toward? I think not. 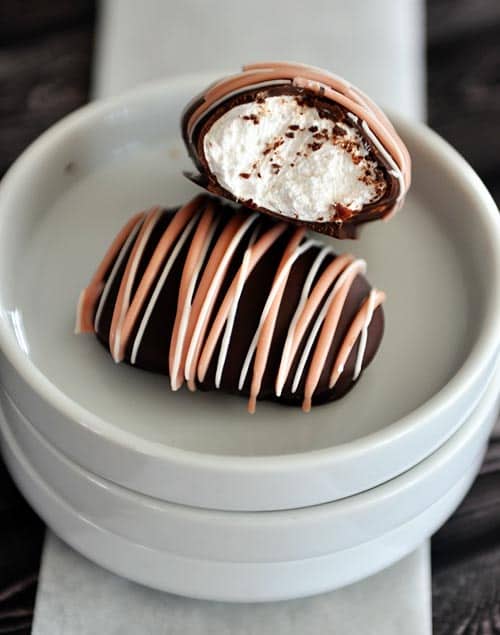 I decided to try my own hand at the famed eggs this year and they are one of the funnest projects the kids and I have done together in the kitchen in a while.

Not to mention the fact that I have seriously been converted to the ridiculous goodness of homemade marshmallows. Heaven help me.

Truth: Homemade marshmallows are a bit sticky and can be messy (that’s kind of part of the fun, though, if you can just chill out for about an hour) and you definitely don’t want the kiddos in on the boiling sugar syrup action, but there is a lot they can do.

Pressing the egg molds into the flour, scooping out the marshmallow, taste testing. You know. That kind of stuff.

As excited as my kids were for these marshmallow eggs, I was the one over in the corner patting myself on the back for totally killing it in the rock star department.

Not only are they cute as cute can be, this homemade marshmallow action is so delicious, it totally blows Peeps (if you like them, sorry) out of the water.

Of course the Ghirardelli bittersweet chocolate covering the insanely light and fluffy marshmallows doesn’t hurt either.

Because I love you and I don’t want you to be scared of this, I have a whole in-depth picture tutorial below the recipe (thanks to my lovely mom for being the hand model for this post).

But really, you probably don’t even need it. They are so simple.

If you can press egg shapes into flour, use a mixer to whip up marshmallows, and have the patience not to curse when strings of marshmallow may or may not end up in your hair, you are good to go.

Homemade marshmallows! Egg shaped! Covered in chocolate! It totally needs to be your thing this week. 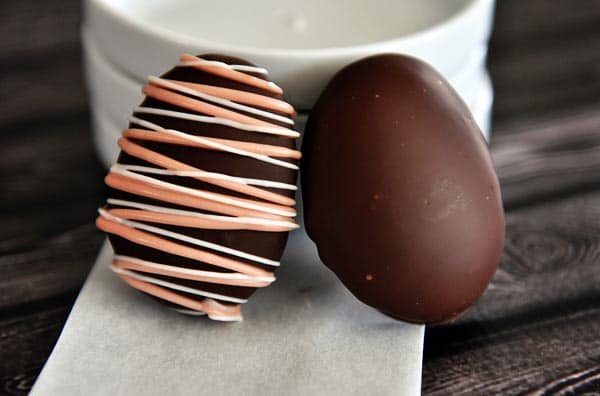 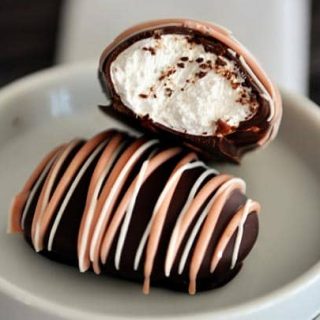 Flour: trust me, you can't taste the little dusting of flour on the eggs once they've been wiped clean. It's completely unnoticeable. However, if you still are opposed, you could try and use powdered sugar or cornstarch for the egg molds - but experiment wisely since I haven't tested it myself and don't know how either of those ingredients will hold up to the process. All the excess flour can get poured back right into your flour bag/container.

Corn Syrup: I know corn syrup is the devil to some people and I, like many of you, don't use it very often; however, I'm not opposed to using it for specialty treats like this a couple times a year. If you are looking for a substitution, you'll have to google or experiment as I haven't tried subbing anything for it in these homemade marshmallows. PS: In case you are trying to work out the ins and outs of corn syrup, while it isn't healthy by any means, don't get it confused with high fructose corn syrup (HFCS) - they are two different things (both made from corn but HFCS has much of the glucose in corn syrup converted to fructose to make it much, much sweeter). Moderation, friends, moderation.

Video Tip: here's a quick video tip on tempering/melting chocolate and another on dipping things in chocolate like a pro.

Chocolate: my preferred brand of chocolate is Ghirardelli.

Recipe Source: adapted slightly from my Aunt Laurie (who is famous for her chocolate-covered marshmallow eggs!), marshmallow recipe from Ina Garten