This homemade stovetop stuffing is so easy and delicious! And it proves to me that stuffing this good should be enjoyed year-round, not just on Thanksgiving! 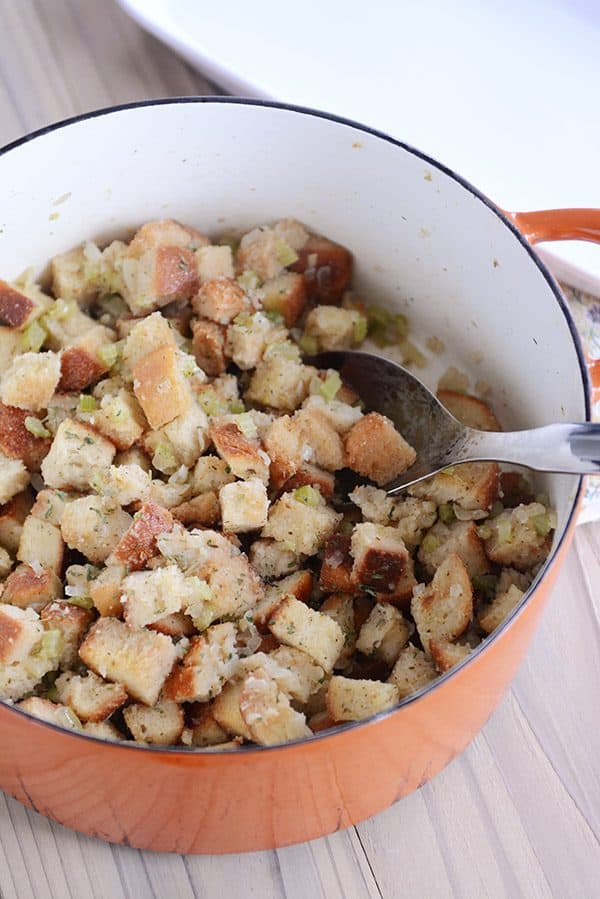 The Saturday before Thanksgiving.

And I’m posting a stuffing recipe.

Who am I and how did I get here?

Not only do I never, hardly ever, post recipes on Saturdays, but I know I’m pushing it with the whole Thanksgiving menu timeline as I shove another brand, new (dare I say, best ever?) Thanksgiving recipe at you.

Is it too dramatic to say that you should probably ditch whatever stuffing you were planning on making and make this homemade stovetop stuffing instead?

I guess what I’m saying is: if I’m posting a recipe on a Saturday, you better sit up and take note. 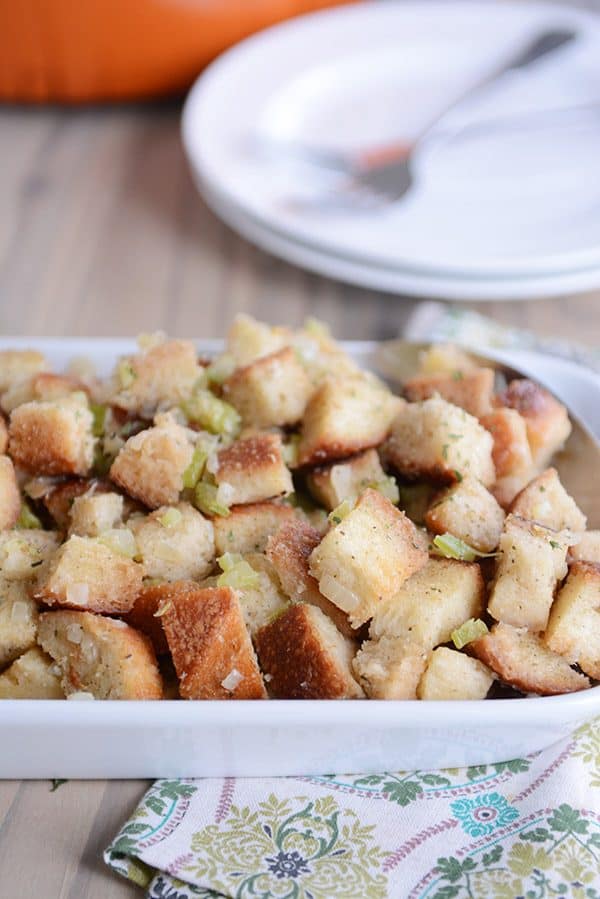 As you probably know, my thoughts, feelings, and overall views on homemade stuffing are complicated and slightly messy.

As someone who detests soggy bread in any form, stuffing is a little tricky.

I grew up on the boxed stovetop stuffing, and while I never minded the flavor, I just couldn’t deal with the mushy texture.

Over the years, I’ve mostly used this fabulous classic stuffing buried deep in the archives.

I really like it because I can make it a little crispy, crunchy on top while still keeping the integrity of a soft, tender bread stuffing underneath.

And Brian, who actually really despises stuffing (based on a dramatic story of gagging in his childhood after his mom made him eat his stuffing in order to get pie), will even eat that archived version.

This more recent pretzel and sausage stuffing is another great stuffing recipe that produces, in my opinion, the perfect stuffing texture. Plus, hello, pretzel rolls. 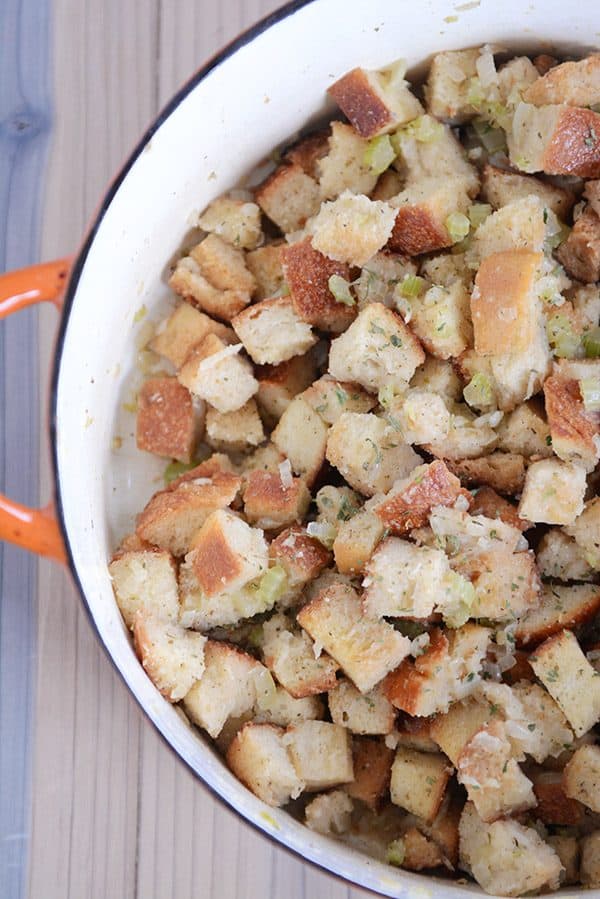 So why the need for a new stuffing recipe? To be posted on a Saturday of all things?

Well, many, many of you have asked for a stovetop stuffing knockoff to free up some of that oven space for other Thanksgiving day baking ventures.

AND. A homemade stovetop stuffing recipe has been on my bucket list for a while.

I’ve tried several variations out over the years, and when I tested out this latest variation last week, I knew that I needed to post it ASAP.

Finally! The perfect method to achieve a tender, flavorful stuffing that a) doesn’t use the oven during prime time hours, b) takes only a few minutes to make, c) isn’t mushy and soggy, and b) tastes AMAZING. 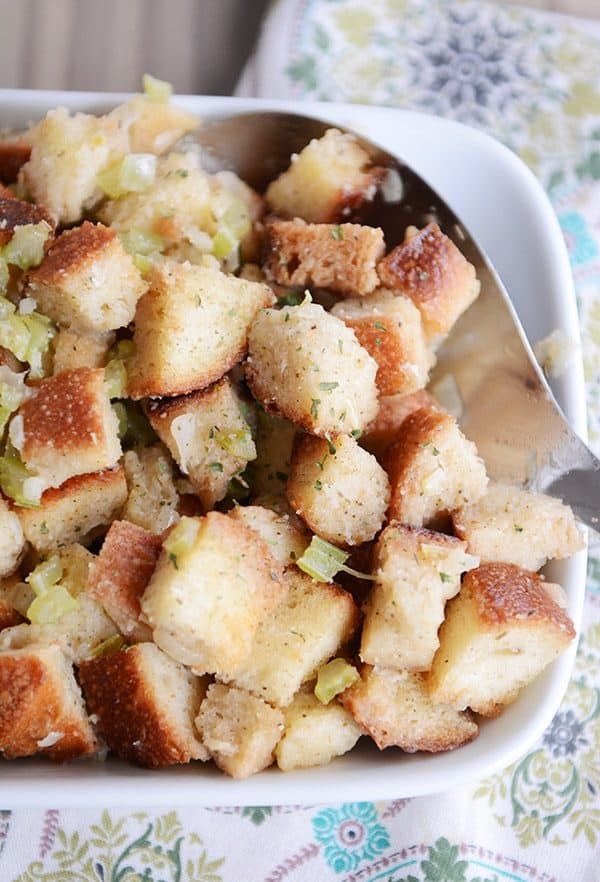 The trick for me is using a sturdy loaf of bread that is not too fluffy, and then cutting the bread into larger cubes than the classic boxed stuffing.

This helps keep a little chewiness in the bread without it becoming completely saturated with broth.

Also, toasting those bread cubes is key for those of us that want to minimize the mushiness (and this step can be done days ahead of time!).

That’s a step you could totally skip if you don’t mind a bit of sog-factor to your stuffing (no judging; there’s room in this world for all levels of bread sogginess tolerance). 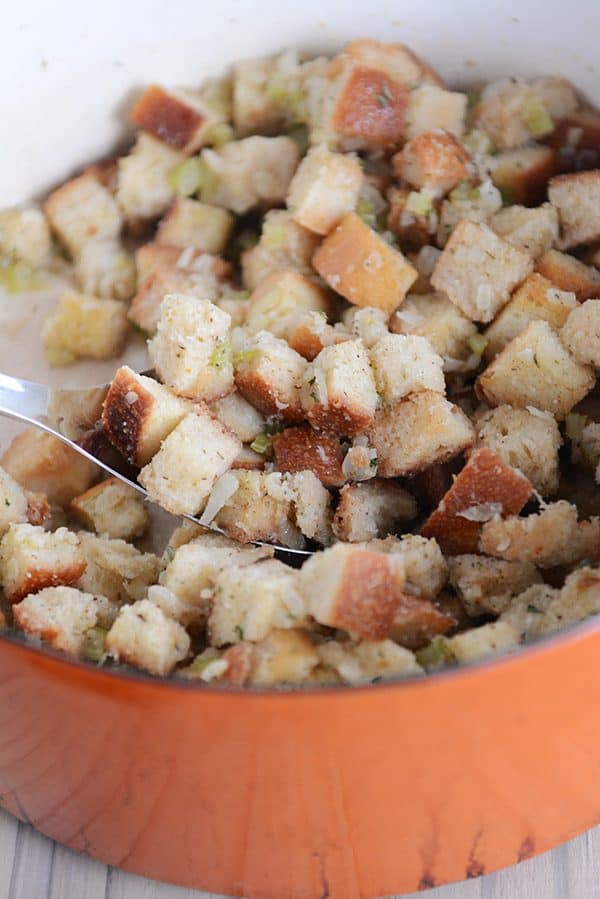 Because I made it in advance of Thanksgiving to test it out, we had it for a night or two with our regular, every day meals.

I have to admit, it was surprisingly delicious with these Skillet Swedish Meatballs. Strange combo, I know, but it worked.

I really couldn’t get over how tasty this stuffing is! It made me so excited to eat stuffing all year long…and I don’t really think I’ve ever been that excited about stuffing before.

If you are on the fence about what stuffing to make for Thanksgiving, this stovetop version should win out simply because it’s ridiculously easy, and honestly, the taste and texture is spot on perfect. 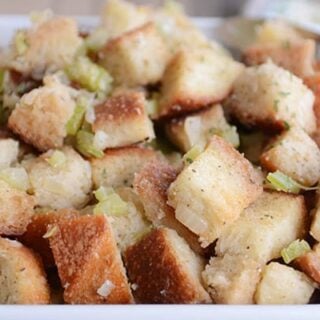 Bread: since I don't like overly soft/soggy stuffing, the crustier the better when it comes to bread. I usually pick up some artisan loaves at Costco or a local bakery, but I've also used this Rustic Crusty Bread as a great substitute. For me, it's really important to toast the bread in the oven in that first step so that it can absorb the broth without totally falling apart, but you could eliminate that step if you don't mind softer stuffing.

﻿Broth: this recipe uses 2 cups broth, which produces a perfectly tender stuffing without being overly soggy. If you like the sog factor (there's room enough in this world for all of us!), increase the broth to 2 1/2 or 3 cups.

Recipe Source: adapted a little from this recipe at The Kitchn 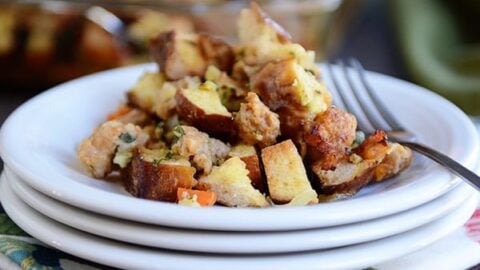 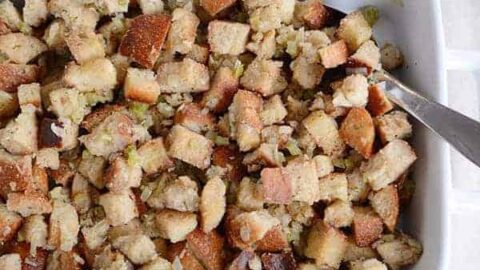