What’s the plan for Mother’s Day? Hmm? If you are a mother, do you cook for yourself or are there little Mother’s Day elves around your house to do the cooking for you?

We’ve lived away from family for so long that the idea of spending Mother’s Day with our actual mothers (whom we love like crazy) isn’t even on the radar.

My friends who divide their time between Mother’s Day brunches and evening dinners and driving to see this mom and that mom and your mom and mine, well, I have no idea what that world is like. It sounds busy and stressful and wonderful all at the same time.

I can’t even fathom that people really have a Mother’s Day Brunch. People do that? Really? Jeez, I need to get out more clearly.

Mother’s Day around here is simple. Brian, who wins all sorts of awards I know, takes over cooking for the day and lets me put in a request for whatever meal I want, and trust me, I don’t take that lightly.

I think long and hard about what food I want to inhale on The Big Day. This year, I’m pretty sure it’s going to be this Beach Street Linguine (oh my delicious), or wait, maybe these Chicken Gyros that I love more than life, or just a second, I think most definitely probably it will be this Coconut Shrimp Curry which is one of my top favorite meals ever. Decisions! The stress of it all!

It looks like the safest thing to do is request all three and see what happens, don’t you think?

Although I’m not a huge breakfast eater (usually just a smoothie and banana after I exercise), Mother’s Day is kind of the exception.

The boys love to toodle around the kitchen throwing together breakfast for me while I pretend to still be sleeping in bed even though my internal alarm clock had me awake hours before.

They bumble into the room and lay on plates of food and glasses of milk and juice (because they usually can’t agree on what to bring so I get both) while they sit on top of my legs and make sure I’m enjoying every bit.

It’s adorable but I have to admit that usually I’m shoving some of the food under the covers when they aren’t looking because they bring enough to feed five mothers.

While they’ve never taken breakfast requests in the past (there have been years the breakfast offering has been a bit scary, not going to lie), this year, I’m pretty sure I’m going to hint to my 9-year old and his trusty dad that these apple cinnamon waffles should definitely make an appearance.

We had them a few weeks ago (thanks, Bri, for the recipe!) and even my non-breakfast-craving self has been dreaming about them since then.

Talk about a perfect Mother’s Day or any other indulgent-day breakfast. Cinnamon flavor to the max! Lightly sweet cinnamon waffles are adorned with warm, sweet, cinnamon apples and a dazzling cinnamon syrup.

I’m off to stick this recipe underneath all the rugrat’s pillows. Here’s to hoping they take the hint instead of thinking it’s a secretly coded message from the tooth fairy. 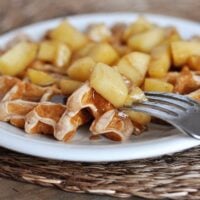 For the Cinnamon Apples: feel free to increase the cinnamon depending on how much cinnamon flavor you want. Apples + Sugar: also, if you are using a tart apple, like Granny Smith, you may want to adjust the sugar (meaning: kick it up a notch).
Serving: 1 Serving, Calories: 620kcal, Carbohydrates: 101g, Protein: 8g, Fat: 21g, Saturated Fat: 4g, Cholesterol: 8mg, Sodium: 455mg, Fiber: 3g, Sugar: 64g

Wire Whisk
Mixing Bowl
Follow @MelsKitchenCafe on Instagram and show me the recipes you are making from my blog using the hashtag #melskitchencafe. I love seeing all the goodness you are whipping up in your kitchens! 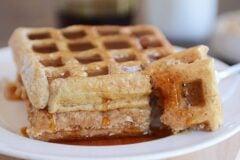 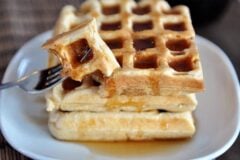 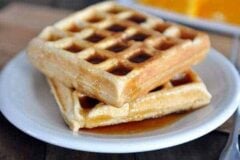 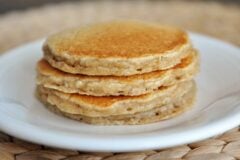 Disclaimer: I am a participant in the Amazon Services LLC Associates Program, an affiliate advertising program designed to provide a means for me to earn fees by linking to Amazon.com and affiliated sites. As an Amazon Associate I earn from qualifying purchases.
Breakfast Quick Breads