If making the perfect, flaky pie crust is the one thing holding you back from rockstar status in the kitchen, I totally have your back today.

Today I’m sharing with you the most perfect, amazing pie crust I’ve ever made.

I’ve been perfecting this recipe for the last few months in order to share it with you. It is simple (no food processor or special tools required) and I truly believe it is fail-proof.

I’ve made it dozens of times and it never ceases to amaze me. In fact, I am 99.9% sure I’ll never use another pie crust recipe again because this one has truly changed my life. Dramatic? Oh just you wait. Your life is about to be changed, too.

The secret? Throw all you know and love about traditional pie crusts out the window because instead of that classic ice water drizzled in at the end, this recipe uses sour cream.

I know. I know! Pie crusts made with sour cream are not a new thing; they’ve been around forever (but the concept is new-ish to me).

And before you ask, I have no idea what the chemistry is behind the perfection, but it works.

Not only is the dough extremely easy to work with but the crust is buttery and flaky and simply the best in the entire universe.

Below, I have a handy-dandy tutorial for you. I’ve separated the tutorial out into main sections (i.e. Rolling, Crimping, etc.). You can click on the separate links to take you to a specific section.

Already have mixing the dough handled and need a little guide on crimping the edges? Don’t worry, I have a link for that.

Pretty sure you know how to roll it out just right but don’t know how to get it into the pie plate? There’s a link for that. Is trimming the edges a breeze but you’d like a little peek into blind baking? Link, link, link.

I am hoping that by sharing this tutorial and no-fail pie crust recipe now, it will instill in you a feverish desire to become a Great Pie Master (so I’m not alone in my obsession).

I’m a pie-making machine now that I’ve found this recipe. Seriously, I can’t be stopped. In fact, I have an unbaked pie crust all pretty and crimped sitting in a pie plate in the refrigerator just waiting to be used even though I have no specific plans for it yet.

Never any harm in keeping a pie crust ready to be used in an instant, I always say. I make pie crusts now when I’m bored. Just because I can. With this pie crust recipe and tutorial under your belt, you’ll be good to go for the holiday season. And now that I’ve shared it with you, my life is officially complete.

Update: a few extra notes: be careful not to measure the flour with a heavy hand (I use the spoon-and-sweep method, don’t shake the cup to level!) and it’s ok if you have to add more sour cream just do so gradually so you don’t end up with too much as it will make a gummy/dense crust. Also, keep in mind that the real key to ending up with a light, flaky pie crust instead of a tough pie crust is minimal handling of the dough in every step – from mixing to rolling. The more the dough is handled, the more those butter pieces break down which means they won’t create those lovely pockets of steam while baking which creates the flakiness.

Recipe Source: tested and perfected by me (Mel) after seeing the idea for it on The Kitchn

Rolling Out the Pie Crust

Putting the Pie Crust in the Pie Plate

Trimming and Crimping the Edge of the Pie Crust 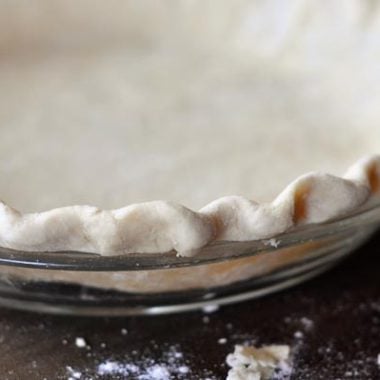 Doubling: this recipe can be easily doubled for a double crust pie. Measuring the Flour: as I mentioned in the blog post above, be careful not to overmeasure the flour. I use the spoon and sweep method (normally I use the dip and sweep method for cookies and other recipes but it’s very important in this recipe to not overflour or you’ll have a bit of trouble with the recipe). I’ll make sure I weigh the flour the next time I make it and report back for a more accurate measure.

Measuring Cups
Follow @MelsKitchenCafe on Instagram and show me the recipes you are making from my blog using the hashtag #melskitchencafe. I love seeing all the goodness you are whipping up in your kitchens! 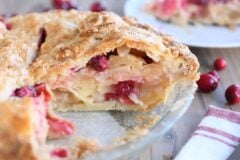 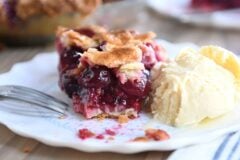 My Favorite Cherry Pie in the History of Ever

Disclaimer: I am a participant in the Amazon Services LLC Associates Program, an affiliate advertising program designed to provide a means for me to earn fees by linking to Amazon.com and affiliated sites. As an Amazon Associate I earn from qualifying purchases.
Kitchen Tips Pies Thanksgiving The Best Pies 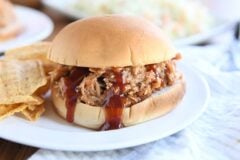 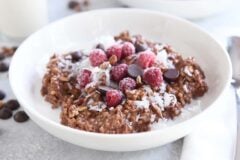