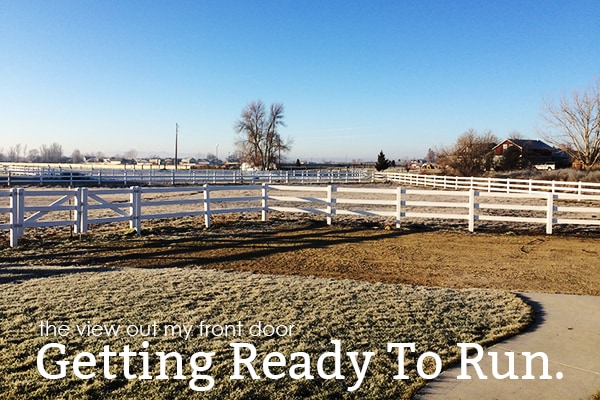 Well, now that the first official week of training for the upcoming half-marathon is under my belt, I’m checking in to share how it went. I don’t expect most people to be interested in these details but by posting each week, I know it will keep me accountable to my training plan and also, I’m hoping that by writing it down, I’ll be able to look back and see that I really am making progress. If you’re new here, I’m a non-runner who really loves food that just signed up for my first half-marathon. Heaven help me.

-4 mile run (two Saturdays ago) – not part of the official training but I wanted to see if I could do it and try to identify what kind of starting point I was at. I ran it. So slowly I should have been walking. And then I died. I was sore for daaaaaays.
-Two 2-mile runs during the week (Tuesday and Thursday)
-Stretching and weights (arms and lunges/squats) on Wednesday
-3-mile run outside on Saturday

–The shoes I bought for running are awesome. They are really, really comfortable and my knees and feet haven’t been sore at all (now my quads and calf muscles are another story). Here’s a link to the shoes (although I found them locally for about $89).

-I’m not confident enough right now to run with other people and have the benefit of talking/companionship to help get through the run; instead, I’ve been listening to an audiobook. It’s just a silly fiction book not really worth recommending but it has helped the time go by quickly (ok, as quickly as it really can when I’m plodding along). I think I like this idea of running to audiobooks. Granted, it might be one factor in running slowly but I’m afraid without something to keep my attention, I’d just stop and sit down in the middle of the road and not go one step further.

-I’m not going to lie, I feel a bit discouraged coming off of week #1. I thought I’d be in better running shape than I am (which is kind of laughable since I haven’t been running regularly). I’m soooo slow. I wasn’t entirely sure after the 4-mile run how fast I was running but based on time from start to finish I knew it wasn’t in the 10-minute mile range like I assumed it would be. Then, on Thursday I ended up running on a treadmill (long story because I despise treadmill running) and realized I’m running even slower than that – probably more like 11:15 minute miles. I’m not going into this really caring about time  – honestly, I just want to finish the darn race, but it was a bit discouraging to realize I’m slower than I even thought (and I already knew I’d be slow which makes me really, really slow in reality).

–Fitting in running has been the hardest challenge. I knew to make it work, I’d be running in the early morning before my kids are awake or later at night when they are in bed (both times when Brian can be home with them). It’s still very dark both of those times and because I’m not keen on running by myself in the dark (thanks to a very scary running experience in college) and like I mentioned above, not wanting to run with anyone else right now (I’m seriously self-conscious about it), last week was challenging trying to fit it in. Tuesday, I decided I could jog in the morning after dropping off three of the kids to school and before I needed to get on with my daily schedule by putting Ty and Cam in the double jogger. Like, how hard could that be? Um, yeah. It was ridiculous. Pushing 70 pounds of child and dragging a rambunctious puppy nearly made me weep with self-pity. I didn’t run very far before deciding it would have to be a brisk walk and then felt kind of bummed all day that I couldn’t even accomplish the first real day of running. Thursday, I convinced Brian to help me pick up a treadmill from a very generous friend willing to loan it to me for a couple weeks. The behemoth treadmill barely fit in our front door and my hopes of storing it away in our bedroom and running there in the mornings were dashed when Brian announced it wasn’t moving another inch. So now it sits just a little to the left of our entryway. It’s reeaaallly hard to miss. Hello, treadmill. But hey, it’s there. I ran 2.25 miles Thursday on the treadmill and again, it was hard. This is when I realized how slowly I’m really running and got a bit discouraged. But I covered up the screen with a towel, blared my audiobook (I’m so hip) and did my best. I’ll have to endure the treadmill a bit more until it lightens up outside in the mornings (I thought I could go run at our high school track in the mornings with a friend who wanted to walk but it’s all locked up) and then it’s outside all the way. Treadmill running is kind of killer for me.

-I did a full body strength workout with a friend early Wednesday morning and completely overdid it – like, I couldn’t walk up my stairs the next day, not even kidding, and it made running painful the rest of the week.

–This week I’m planning on running 2 miles on Monday, 30-40 minute strength workout Tuesday (arms, core and legs), run 2 miles on Wednesday, another 30-40 minute strength workout Thursday (arms, core and legs), rest on Friday and a 3 mile run on Saturday. That’s all assuming the week goes as planned, which it rarely does, so I’m also prepping myself to be flexible (not one of my strong points).

-Thanks to some of your feedback, I’ve altered my training schedule just a bit (it doesn’t really matter right now but it will in a few weeks) to incorporate a few more miles during the weeks 13-20 (it seems my overall weekly mileage was a bit low). I’m sure that schedule will continue to change as I go along.

-Rachael (story here) recommended an app to train for a 21K (half-marathon) – she used it and loved it. It’s a 12-week program which of course I’m not ready for yet (the half-marathon I’m running is 19 weeks away) but I looked into it and definitely think it’s a possibility when I get to the 12-week out mark. I like how it gives you prompts, hints, guides while you are running.

-I’m not running for time this week – just building up endurance. And so I’m just going to tell myself it’s ok I’m slow as long as I’m still putting one foot in front of the other.

-Dude, I need a lot more water than I’m currently drinking. I’ve always been a bad water drinker but it’s been noticeable this week. So more water it is as well as upping my protein a bit (cottage cheese is my new friend for lunch).

This must all sound so elementary and silly to real, live runners, but it is my reality right now and I have to tell myself that the first week might be one of the hardest (getting out that front door for the first time was brutal). I appreciate all of you who have checked in to motivate, give advice, sign up for the race, let me know you’re a running newbie (or a running expert)  – and everything else. I really would not have the dedication to do this if it weren’t for all of you. Thank you! On to week #2!