Have we had this talk yet?

The one where I tell you that Brian’s favorite dessert in all the world is a banana pudding/Nilla Wafer blizzard from Dairy Queen and that when other dads tuck their sons into bed at night and tell them gallant stories of heroic adventure, Brian regales our four sons and one daughter with tales of his days working at Dairy Queen as a teenager and his success at making the best banana pudding blizzard known to mankind?

The man loves him some banana pudding.

I’ve talked before about the phenomenon that exists between the male species and banana pudding. Sorry to sound biased, but there’s something to it, I swear.

Brian could be the spokesperson for the cause.

These little banana pudding caramel cream trifles left him speechless. And can I announce something here and now? I didn’t even get to taste one of these! I made these Easter morning for our dinner later that night but whattayaknow, my 9-year old and I both came down with some nasty virus within hours of the last drizzle of caramel adorning the final trifle.

My husband, who says he felt sorry I was sick and who says he was just trying to help me out so that I didn’t have to suffer needlessly gazing at a dessert I clearly couldn’t eat, ate mine.

And the next day when the sickie child and I weren’t feeling much better, Brian ate the other leftover one, brown bananas and all, which is fine because I wouldn’t have touched mushy, brown bananas with a ten foot pole at that point.

If that isn’t dedication to his banana pudding cause, I don’t know what is.

In all reality, though, bananas, homemade vanilla pudding, toasted buttery Nilla Wafer crumbles, decadent caramel sauce and whipped cream are just bound to be a success.

I may or may not have eavesdropped on Brian’s bedtime story later that night wherein the epic DQ blizzard was curiously omitted leaving the boys in wide-eyed wonder listening to a farfetched tale of a new kid in town: the banana pudding caramel cream trifle kid, to be exact. 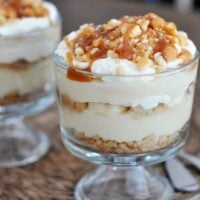 Caramel: here is my favorite homemade version.  Serving Dishes: if you don’t have individual trifle or serving dishes, you might try layering all the components in a large baking dish (say, an 11X7-inch size or something similar) for a more family-style approach. Make Ahead: also, the vanilla pudding, Nilla wafer crumble and caramel sauce can be prepared up to 2 days in advance. In fact, you should keep in mind that since it is homemade pudding that needs time to cool and set up, you should plan ahead – but don’t assemble the actual dessert(s) too early or else the bananas will turn brown and mushy. Ick.
Serving: 1 Serving, Calories: 677kcal, Carbohydrates: 114g, Protein: 11g, Fat: 21g, Saturated Fat: 10g, Cholesterol: 117mg, Sodium: 606mg, Fiber: 2g, Sugar: 53g

Cookie Sheet {Half Sheet Pans}
Follow @MelsKitchenCafe on Instagram and show me the recipes you are making from my blog using the hashtag #melskitchencafe. I love seeing all the goodness you are whipping up in your kitchens!

Recipe Source: greatly adapted from this recipe at Glorious Treats {changed out graham cracker crumble for Nilla wafer crumble, used an adapted version of my favorite vanilla pudding and a homemade caramel sauce} 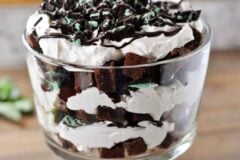 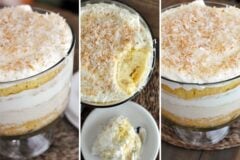 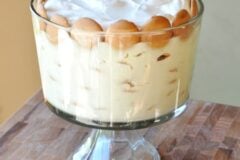 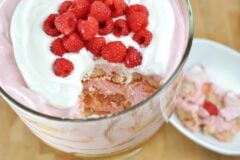 Disclaimer: I am a participant in the Amazon Services LLC Associates Program, an affiliate advertising program designed to provide a means for me to earn fees by linking to Amazon.com and affiliated sites. As an Amazon Associate I earn from qualifying purchases.
Desserts Fruit Pudding 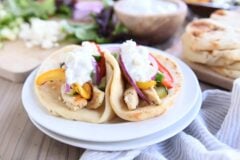 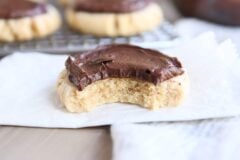 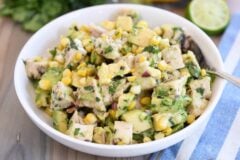