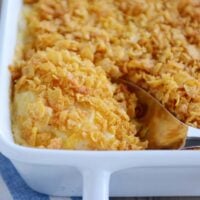 Potatoes: My preference is to use cooked potatoes for this, but frozen hash browns definitely work in a pinch. As noted in the ingredients, I use 5-6 medium russet potatoes (about 30 ounces). I peel them, boil them (the Instant Pot makes quick work of this; high pressure for a 4-ish minutes with enough water/broth), drain, and let them cool completely (if I have time to chill them, even better, as it makes shredding or dicing so much easier without them falling apart).  Make ahead: these potatoes do very well being made ahead of time. I often make them 1-2 days ahead of time, covering and refrigerating (storing the cornflake topping separately in a bag). If chilled, I bake the potatoes, covered with foil, for 15-20 minutes, then uncover, top with the cornflake mixture and bake for another 30-35 minutes until hot and bubbly. I have not tried freezing them, but I believe many in the comments have done so (read through for their experiences).
Serving: 1 Serving, Calories: 393kcal, Carbohydrates: 40g, Protein: 13g, Fat: 21g, Saturated Fat: 13g, Cholesterol: 59mg, Sodium: 796mg, Fiber: 2g, Sugar: 5g

Cookware
Silicone Spoon
Follow @MelsKitchenCafe on Instagram and show me the recipes you are making from my blog using the hashtag #melskitchencafe. I love seeing all the goodness you are whipping up in your kitchens! 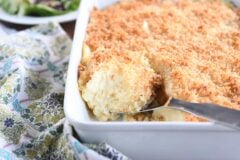 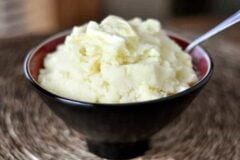 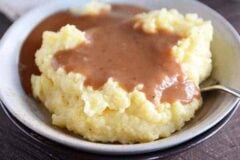