Check out this post, complete with a step-by-step guide, on making your own foolproof, delicious, creamy homemade yogurt. You won’t believe how simple it is!

Have you made their own yogurt since I posted this DIY homemade yogurt method two years ago?

I know many of you have been making it much longer than even that, but back then, it was my first foray into homemade yogurt.

I’m excited to report we’ve been religiously making and eating it for the last two years and are happier humans because of it. (Actually, that’s probably not the case since someone still usually ends up in timeout – sadly, not me – at least 14 times a day so perhaps homemade yogurt really isn’t the cure-all for toddler tantrums and brotherly mishaps. I’ll get back to you on the scientific research behind that claim.)

By virtue of making it at least 3X a month for the last two years, my process has changed a bit since the original post.

If anything, I’ve streamlined my method a bit – it’s faster and easier and less work.

The slow cooker is still a great way if you want a hands off approach, but if time is at a premium and you want to finish the process all in one day, I’m here for you.

Not only have I changed up the cooking method – but also the straining and incubating tools.

So let’s talk for a second about a few things you need for this really simple yogurt-making process:

Milk: I alternate between 2% and whole milk (sometimes a combination of both). I haven’t used fat-free milk or milk alternatives (like almond, coconut, soy, etc.) but there are several comments on the thread of the original post with feedback on using those types of milk. I generally only do a gallon of milk at a time. Depending on the fat content, and even brand, as well as how long it’s strained, I get about 3 quarts of yogurt from one gallon of milk.

Yogurt Starter: Plain yogurt, Greek yogurt, vanilla yogurt – all different types of yogurts can be used for the starter, but I would probably stay away from fruit-based yogurts especially those with real fruit pieces. The most important feature is that the yogurt must have active cultures so look at the ingredient list to make sure it includes Lactobacillus bulgaricus and Streptococcus thermophilus. Once you start making yogurt, the homemade yogurt can be used as the starter.

Sweetener (optional): Because we eat most of the yogurt for snacks, breakfast, etc., I almost always sweeten it and add vanilla extract during the process (and then once a month I’ll do a plain batch to use for cooking/recipes and if we want to eat it, we’ll add a low-sugar jam or fruit syrup). If you want to exclusively use it for plain yogurt or a sour cream substitute or just want to sweeten it as you eat it, you may not want to add sweetener during the cooking/culturing process. I use agave nectar (for no real reason except I like how it tastes and it’s a little lower on the glycemic index) to sweeten ours but you could definitely play around with sweetener (sugar, honey, etc.).

Thermometer: An instant-read thermometer is pretty crucial to yogurt making – the good news is that they aren’t terribly expensive + you can use them for so many things (like getting your pork tenderloin to come out as juicy and tender as can be). I can highly recommend the one I have – a Thermapen (don’t faint, it is on the pricey end even though I just claimed you can get them inexpensively; Brian gave it to me for Mother’s Day several years ago and it’s the only kind I’ve ever used and I love it very much) or I have several friends that have recently purchased this less expensive brand of thermometer (still with excellent reviews). It’s really important to heat the milk to 180 degrees F during the first step and then let it cool to between 110-120 (where it will need to stay in that range throughout the incubation period) and those are hard things to judge just by dipping your finger in the milk.

Straining Mechanism: Gosh, that sounds technical. But really, all I mean is you need a way to strain the yogurt. I used to line a colander with cheesecloth or coffee filters (word has it that some restaurant supply stores have oversized coffee filters which would be really handy). But after my friend Deb told me she uses these nut milk bags (usually for making almond milk) to strain her yogurt, I decided to try and I’m hooked. They are reusable and wash up really easily plus they strain the yogurt much faster. So instead of it straining for a couple hours in a colander with cheesecloth, I only strain it for 20-30 minutes using the nut milk bag. I have two of the bags and can fit about 3 quarts of yogurt in each one. They are inexpensive and well worth it in my opinion (plus, as I mentioned earlier this week, I use them for wringing out zucchini which has also revolutionized my abhorrence of that task).

Jars/Lids: Quart-sized canning jars (I prefer the wide mouth ones but either will work) are perfect for making yogurt but you can really use any type of container that has a lid and will fit in the cooler you use for the long incubation period. I also really, really love the plastic lids just for canning jars so I’m not messing with a lid and a ring. I bought several boxes of these lids just for yogurt making and use them all the time when I pull jars of jams and syrups and peaches off my shelves.

Cooler: Instead of using the oven all day or night long (with the light on) to keep the yogurt warm, I’ve switched to using a cooler. I’m pretty sure several of you mentioned this method in the original yogurt post so thanks for the brilliant idea! I have a 13-year old cooler (it was a wedding present over a decade ago) that is the perfect size. You don’t need anything fancy – just a well insulated, not super big cooler. I can easily fit six quart jars in the cooler and the lid closes tightly. I fill it up with hot water (using that valuable thermometer to dip in the water and make sure it reads between 110-120 degrees) – all the way to the neck of the jars, close the lid, and let it rest in a warm/non-drafty spot for 8-12 hours.

A couple other quick notes: I don’t add powdered dry milk to my yogurt anymore and haven’t for a long time but you can do so if you want a little extra protein.

Also, if I start the process around 8 a.m., I can have the yogurt made, cultured and strained by the time I go to bed. And the dreamy thing is that for 9 or so hours of that day, I’m not doing a thing but sitting there watching a closed cooler do it’s work.

Phew! I think that’s it. If you have questions, feel free to leave them in the comments section. The notes below the recipe title have additional information as well as the picture tutorial so read through those, too.

There are not many breakfasts I look forward to more than a bowl full of creamy, thick homemade yogurt topped with a smidgeon (a large smidgeon) of granola.

Thankfully, as long as time is in your favor, homemade yogurt is simple and totally stress-free.

Tutorial: make sure to check out the step-by-step picture tutorial. Milk: I alternate making this yogurt with whole milk and 2% milk (cow’s milk). I have not tried it with alternative milk products (like almond, coconut, soy, etc) but I know others in the original post have done so. Sweetener + Extract: I don’t include sweetener amounts in the recipe but since I include that info in the picture collage below, here are the details: I add 1/2 cup agave nectar and 1 teaspoon vanilla for every gallon of milk. You can experiment with different sweeteners and extracts (like coconut, yum). You definitely don’t have to add sweetener or vanilla, especially if you want to use it as plain yogurt in recipes or for a sour cream substitute. We use it 99% of the time for eating so I prefer the lightly sweetened version. Starter: lots of online sources say you can use less starter but when I’ve done so, my yogurt is much thinner, so I stick with the 1/2 cup. Also, you can use this homemade yogurt as the starter for your next batch, too. Time Frame: finally one more note, if I start the yogurt at around 8 a.m., I can have it completed (strained and all) by bedtime.

Instant Read Thermometer
Ladle
Follow @MelsKitchenCafe on Instagram and show me the recipes you are making from my blog using the hashtag #melskitchencafe. I love seeing all the goodness you are whipping up in your kitchens! 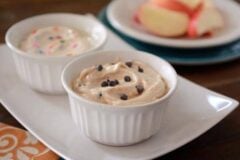