This zucchini pizza crust is low-carb, unbelievably simple and absolutely amazing. Move over traditional pizza! Zucchini crust might take over the world.

This low-carb zucchini pizza crust is totally and completely out of this world amazing.

Throw your skepticism aside and just believe me, ok? (For a million reasons, not the least of which is that it could make a super cute, Pinterest-worthy St. Patrick’s Day meal, you know, with the greenish crust and all, and then you’ll feel like a rock star which is never a bad thing).

My sister, Em, has made this pizza crust dozens of times and kept telling me about it – so often that I kind of started to ignore her (sorry, Em).

It’s just that I really, really hate wringing water out of zucchini. Maybe I’m old and pre-arthritic, but it hurts my hands and disturbs me the way it turns the kitchen towel all green and swampy.

Anyway, after Em realized I was avoiding the zucchini pizza crust issue, she finally told me she wouldn’t speak to me until I made it and since I’m really trying to convince her to run this half-marathon with me, I decided to just get it over with.

We have a very mature sisterly relationship.

So I made it. Totally cringing in anticipation of what Brian was going to say. That man loves his pizza and I hate to brag, but our homemade pizza kind of rocks.

So throwing a green zucchini pizza crust at him? Well, I wasn’t sure how it would go over.

But I forged ahead with the comfort knowing he will eat just about anything I put in front of him (good man that he is), whether or not it’s followed up with: “um, that may not necessarily be the most blog-worthy thing you’ve ever made.”

To say this crust was a complete home run is an understatement. My family is in love. I’ve made this four times or so, and each time, we polish it off entirely.

No leftovers. And Brian always raves, which is pretty remarkable for an old-fashioned guy who loves his BBQ chicken pizza on real, live pizza crust.

As you can see, you really need to give it a try. A few keys to success:

-Seriously, wring out as much liquid from the zucchini as your little hands can muster. This last time, a light bulb went off and I decided to use the same bag I’ve started using to strain my homemade yogurt (an updated post on that coming next week) and holy dry zucchini – it worked wonders and is absolutely the only way I’ll wring zucchini from now on.

-Preheat a baking stone or overturned baking sheet for at least 30 minutes. The crust needs to start out on that hot, hot stone in order to brown to perfection (otherwise you’ll end up with limpy, quiche-like crust, ew).

-Don’t expect the dough to be anything like regular (yeasty) pizza crust. It’s very soft and sticky and I know you’ll be wondering if there’s any way it will turn into a pizza you can actually pick up (I was nervous, too, the first time) but I promise it bakes perfectly in the oven, especially if you use the ingredient amounts in the recipe and follow tips #1 and #2 above.

As I mention in the notes of the recipe, I’ve also used part cauliflower when I didn’t have as many zucchinis in my refrigerator (wringing out the water from the cauli, too) and it was fantastic as well.

I’m definitely not giving up traditional pizza but I love how quickly this crust comes together and the fact it’s a little less carb-loaded (but still amazingly delicious).

I have a feeling once zucchini is proliferating like mad in our garden, we’ll be making this at least weekly. 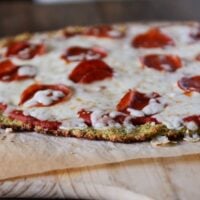 Pizza Sauce: here is my favorite 2-minute, blender version. Crust: the dough is pretty soft and sticky so don’t be afraid to grease your hands to pat the crust into an even thickness. I personally like the crust fairly thin. Zucchini Amount: also, keep in mind that if you coarsely grate the zucchini, you might end up with more than the 3-4 cups which is ok – just stick to about 3 medium zucchini (1 1/2 pounds). Dry Zucchini: I used to use regular old kitchen towels to squeeze the zucchini dry until I had the idea to use the same bag I use for straining yogurt…and it works amazing well. The driest zucchini I’ve ever wrung out which makes me happy (and means I’m a nerd and I’m ok with that). Cauliflower: oh, and last thing – one time when I made this, I was short on zucchini, so I shredded up some raw cauliflower and used that with the zucchini (I wrung as much water as I could out of it, too)…and it was equally amazing.
Serving: 1Whole Crust, Calories: 537kcal, Carbohydrates: 54g, Protein: 33g, Fat: 23g, Saturated Fat: 12g, Cholesterol: 233mg, Sodium: 1250mg, Fiber: 10g, Sugar: 7g

Box Grater
Follow @MelsKitchenCafe on Instagram and show me the recipes you are making from my blog using the hashtag #melskitchencafe. I love seeing all the goodness you are whipping up in your kitchens!

Recipe Source: adapted from a recipe sent to me by my sister, Em, originally from here 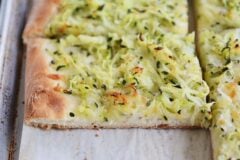 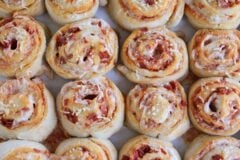 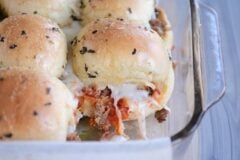 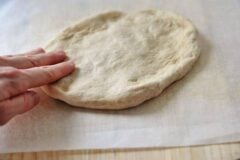 Disclaimer: I am a participant in the Amazon Services LLC Associates Program, an affiliate advertising program designed to provide a means for me to earn fees by linking to Amazon.com and affiliated sites. As an Amazon Associate I earn from qualifying purchases.
Gluten Free Adaptable Healthy Main Dish Meatless Pizza The Best Pizza Zucchini 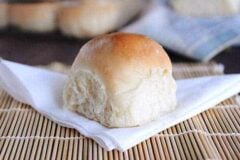