Loaded with over 10 cups of vegetables (a good thing, I promise!), this easy cauliflower soup is creamy, cheesy, and super tasty! 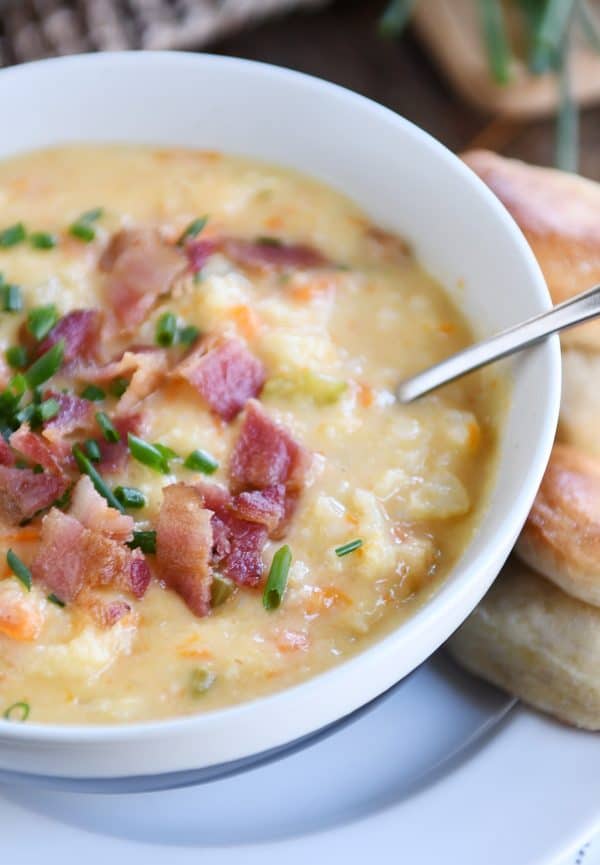 First of all, January is probably my least favorite month in the history of ever. I’m sorry to be a downer when right now when pretty much everyone I know is focused on happy goals and positivity and change and growth and removing sugar and toxic people from their lives forever.

I should view this month with more gratitude and purpose. But I really don’t like it. Sorry. It’s cold. It’s dreary and brown (it’d be better if it would just snow, dang it). And there are no Christmas decorations and music to pep things up.

However, let us not focus on the negative. No, not us. Instead, let’s focus on the fact that the first recipe I’m posting in January (of a brand new decade, no less) is probably one of the most delicious soups of my existence.

Now that’s something to celebrate. 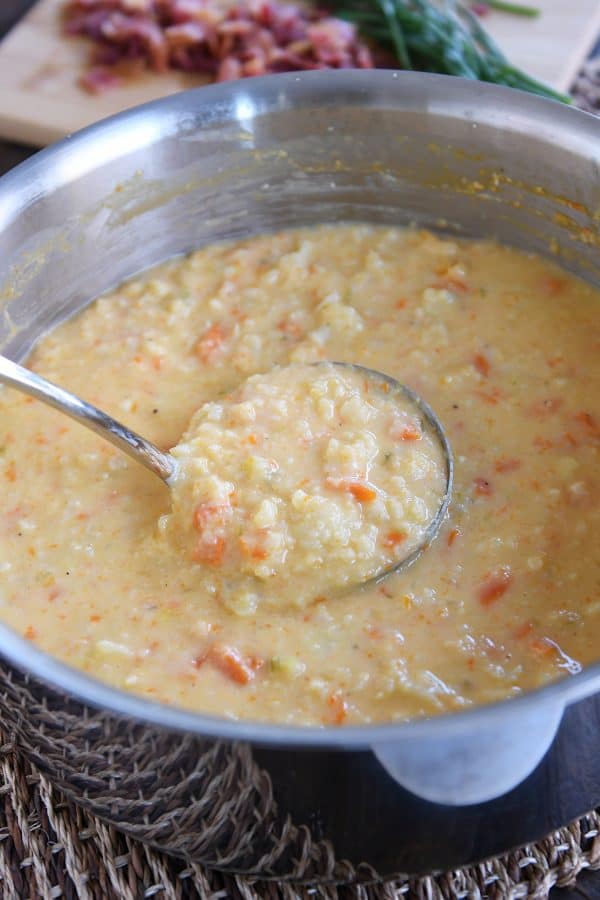 This loaded cheesy cauliflower soup may not look like much, but let me tell you: once you top it with all the optional (but not optional, if you know what I mean) garnishes, like bacon and chives and maybe a dollop of sour cream? Well, you’re going to be very, very happy.

Also, while I wouldn’t consider this soup extreme health food (which is definitely not my specialty anyway), it’s definitely on the “healthful” side of the spectrum.

After all, it has over 10 cups of vegetables. And is crazy delicious. High fives all around.

It starts off with onions (or leeks – my favorite!), celery and carrots getting a quick sauté until they are just starting to get tender. They’ll cook more in a sec. 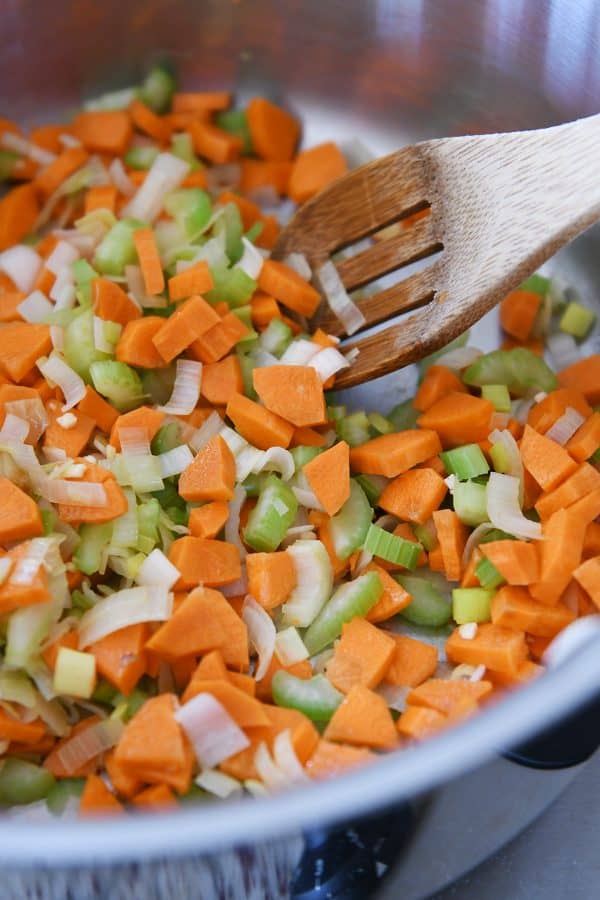 Loads and loads of cauliflower

This soup calls for a whopping 8-10 cups of cauliflower. That’s about two medium heads of cauliflower chopped. Yes, that’s a lot. No, it isn’t a typo.

The cauliflower will cook down a bit in the next step. UPDATE: readers reporting everywhere that they used the frozen riced cauliflower and it worked great (it’ll pack down more in the measuring cup, so I’d say use 7-9 cups riced cauliflower, fresh or frozen). 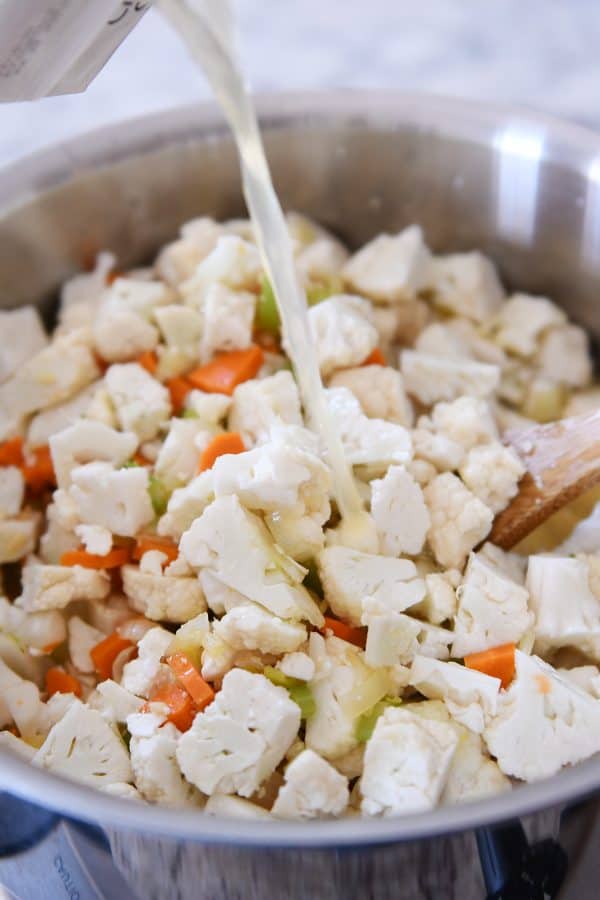 You can see the difference in the color, texture and size of the cauliflower after it simmers, covered, for about 10-15 minutes.

You want to cook it until it is very tender. Not al dente. Not kind of crunchy with tender spots. You want it very, very tender. 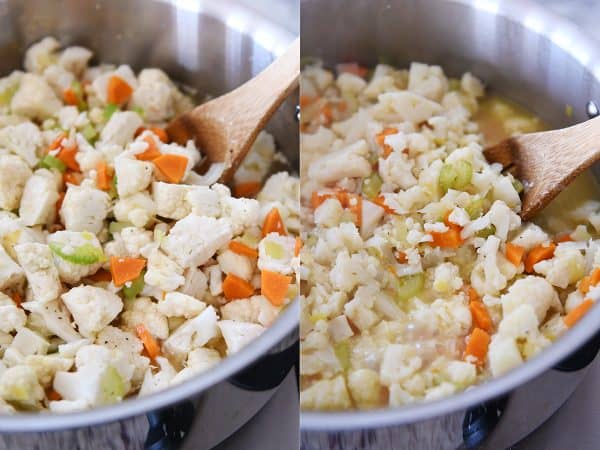 You have a few options here: 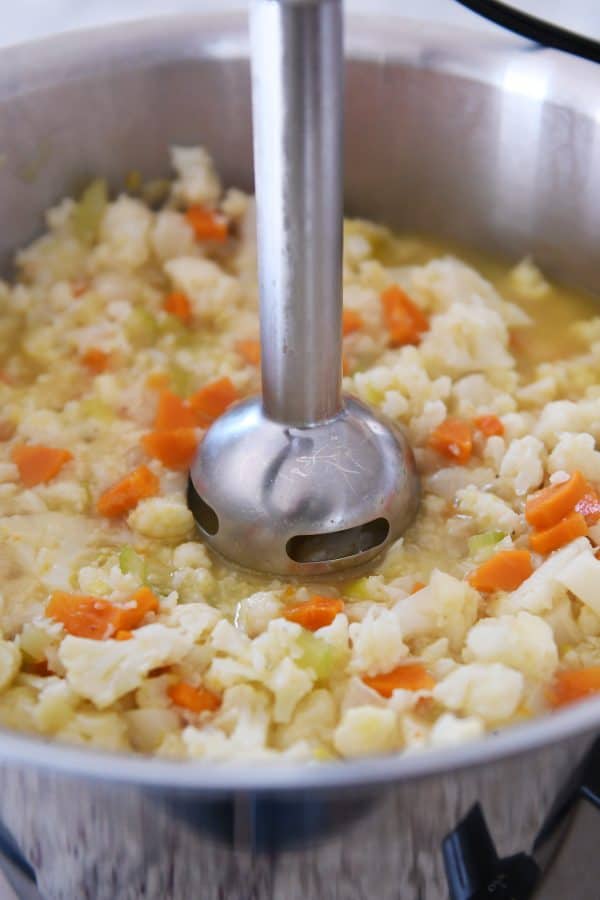 Because there are carrots in this here soup, the blending action will turn the soup a slightly orange hue. Which is totally ok because we are going to enhance the color with some cheese in just a minute anyway. 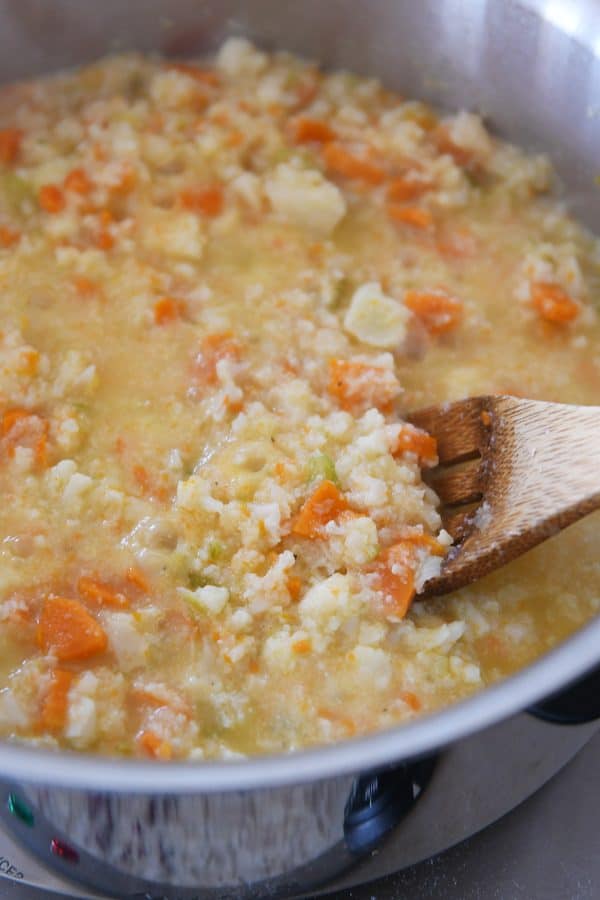 How to thicken the cauliflower soup

Instead of using heavy cream or making a traditional roux from butter and flour, I’m opting to cut a few calories here and instead use a quick-blended or whisked mixture of flour + milk. I use this method in a lot of other soup recipes, like this leftover turkey soup, and it works beautifully.

Stir the milk mixture into the soup and cook it over medium heat for just a few minutes until slightly thickened. 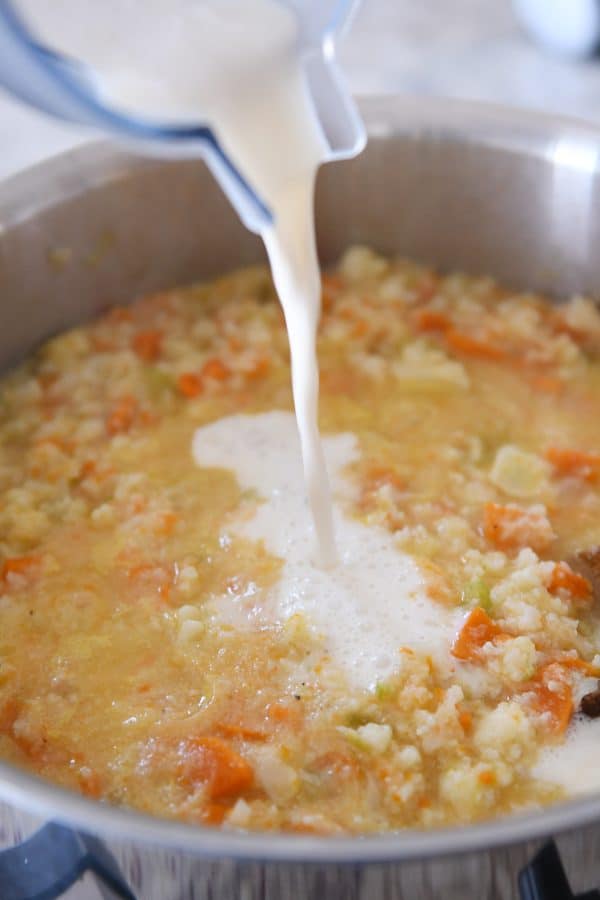 Last step? Add that cheese! I add about a cup. Ok, a heaping cup. Fine, probably about two cups.

You can add more or less depending on how you feel about cheese, life, and general happiness.

I hate to do this (but I must): for optimal creaminess, use cheese you’ve grated yourself. Preshredded cheese (I know, I’m a broken record) doesn’t melt as well because it’s often coated with a powdery substance to keep it from sticking together. 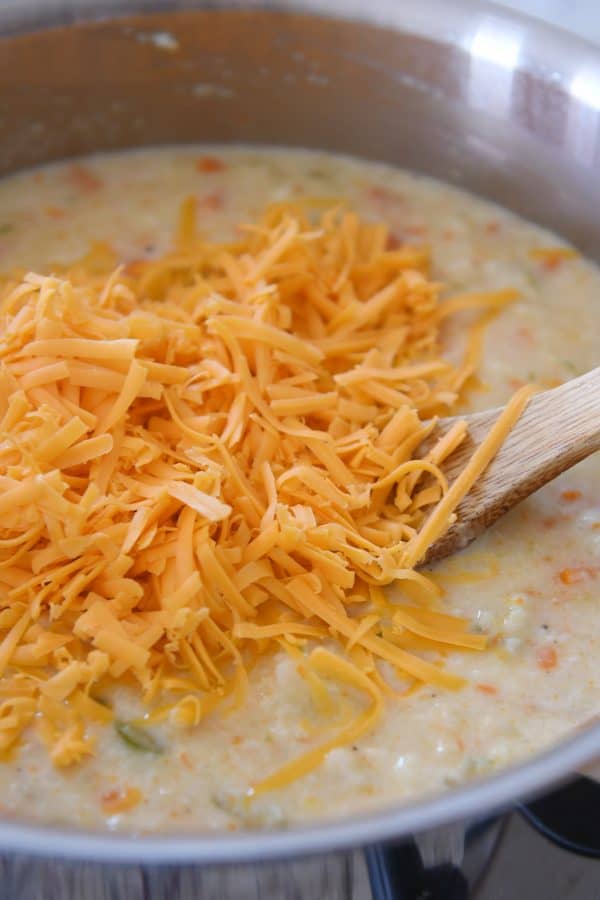 There. There you have it.

This loaded cheesy cauliflower soup is so insanely good. I can almost revise my January estimation now after all the positivity I’ve generated by thinking and talking about this soup.

Of course, we like to enhance the natural flavors with loads of garnishes. Bacon, chives, sometimes even a little sour cream and extra cheese. You only live once. 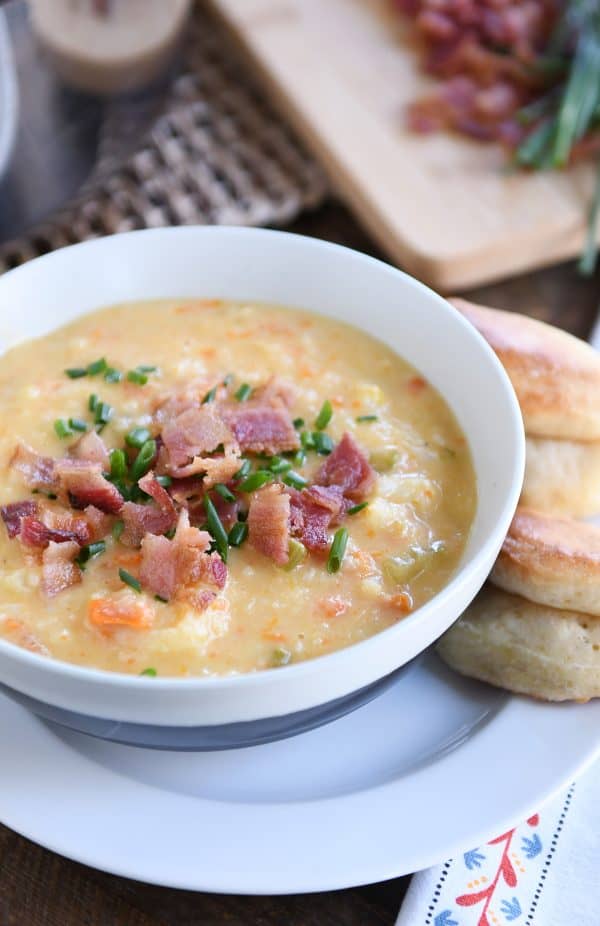 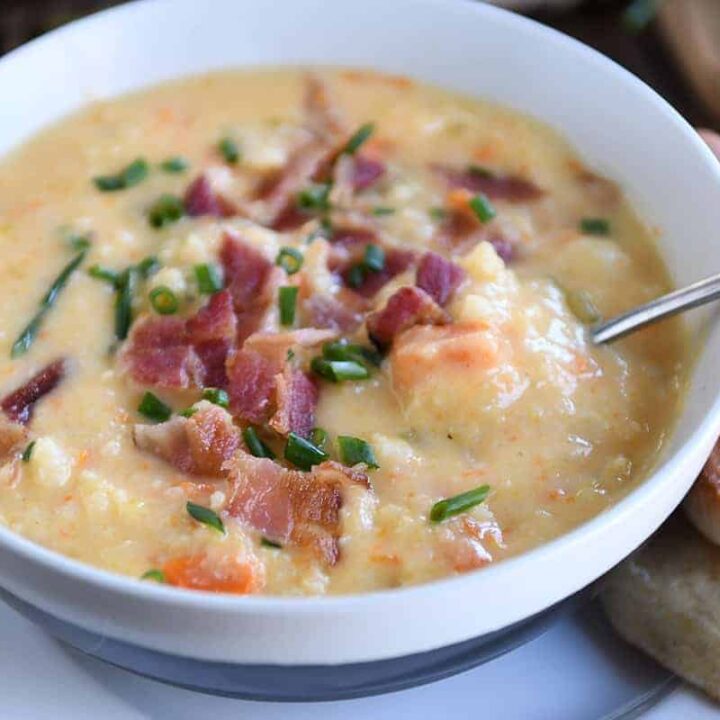 Cauliflower: if you end up with a bit more or a bit less cauliflower, it's ok. It doesn't have to be exact. You can also use the stems (might need a few extra minutes of cooking to soften). UPDATE: readers reporting everywhere that they used the frozen riced cauliflower and it worked great (it'll pack down more in the measuring cup, so I'd say use 7-9 cups riced cauliflower, fresh or frozen).

Broth: I always use low-sodium broth (chicken broth for this recipe, but vegetable broth can be substituted for a vegetarian version)

Cheese: sharp white or orange cheddar cheese will work in this recipe (so will medium or mild, but the flavor will be better with sharp cheddar). Using freshly grated cheese will melt better than using preshredded cheese (which is often coated with a powdery substance to keep it from sticking, but it also makes it melt less well). 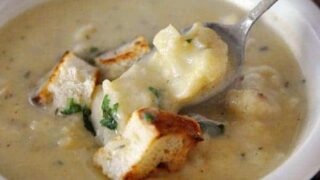 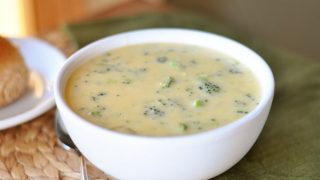 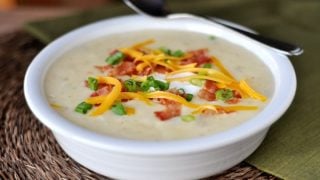 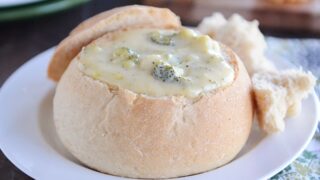