These cheesy chicken enchilada stuffed peppers with a slow cooker variation are fantastic! Cheesy, creamy, and full of simple flavors.

So. Stuffed peppers. Do you love or hate?

Until about, oh, say Tuesday of last week, I would have to put myself in the big, huge camp of those who greatly dislike stuffed peppers. As in, I don’t think in my long history of loving food that I have ever, ever craved a stuffed pepper. Know what I mean?

Chalk it up to a combination of the ones I’ve had in the past always being green peppers (I like the sweetness of the other colors better, what can I say) and the not so enticing ground beef/rice/tomato mixture. It just doesn’t speak to me (but I still love you very much if it speaks to you).

Knowing I wanted to figure out a version that did speak to me and since I just posted about this fabulous homemade condensed cream of chicken soup, I thought that a creamy version might do the trick.

Variations on the ol’ stuffed pepper are endless and this white enchilada version has done wonders to replace my prejudices against the humble stuffed pepper.

These babies are fantastic! Cheesy, creamy, full of simple flavors.

It’s as easy as mixing a bunch of ingredients in a large bowl and then, well, you know what comes next: stuffing the peppers. Cover, bake, and you’re done.

I’ve also included a simple slow cooker variation in the notes of the recipe in case you need to simplify even more. Simplifying = Beauty. Beauty = Cheesy Chicken Enchilada Stuffed Peppers. 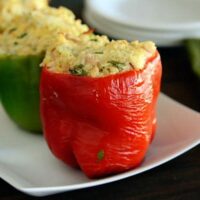 Slow Cooker: these peppers can also be made in the slow cooker. After filling the peppers, place them in a single layer in a slow cooker that has been lightly greased with cooking spray, cover and cook on low for 3-5 hours. Peppers: it really depends on the size of your peppers to know how many this will make. I used what I would consider fairly large peppers and got six glorious stuffed peppers.
Serving: 1 Serving, Calories: 311kcal, Carbohydrates: 28g, Protein: 21g, Fat: 13g, Saturated Fat: 6g, Cholesterol: 51mg, Sodium: 769mg, Fiber: 7g, Sugar: 6g

Recipe Source: from Mel’s Kitchen Cafe (inspired by this recipe at Cinnamon Spice) 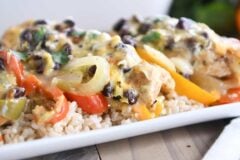 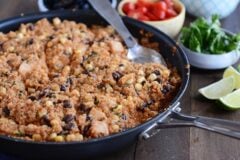 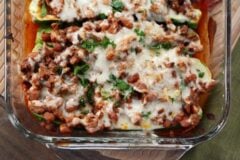 Disclaimer: I am a participant in the Amazon Services LLC Associates Program, an affiliate advertising program designed to provide a means for me to earn fees by linking to Amazon.com and affiliated sites. As an Amazon Associate I earn from qualifying purchases.
2017 Turkey Leftovers Chicken Egg-Free Fave Healthy Healthy Main Dish Quinoa Recipes That Use Cooked Chicken