The process is a bit more unique than simply doubling the size of the cinnamon roll and I’ve fallen in love with the method because it is quirky, fun and results in a fabulously delicious cinnamon roll (think: lots of buttery, gooey, cinnamon goodness).

I’ve made these mammoth cinnamon rolls five or six times in the last couple of weeks and they are going to be the star of our upcoming Christmas morning.

They fair beautifully well shaped in the pan and refrigerated overnight to be baked the next morning (with a little rising time in there) and the orange-infused cinnamon version? Oh my. Heavenly. Beyond.

I’m just hoping this newfound giant cinnamon roll creativity will still allow me to be satisfied with the average cinnamon roll. For now, these humongous cinnamon rolls are making a definite appearance in my past, present and future.

How to make this giant cinnamon roll ahead of time

This post on making cinnamon rolls ahead of time applies perfectly to any sweet roll…like this giant roll! 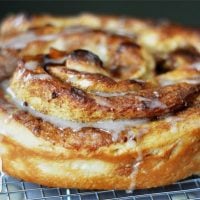 Flour: I often use half to 3/4 finely ground white whole wheat flour with good results – and sometimes I get crazy and use 100% whole wheat flour (always finely ground white wheat) but the bread is a bit more dense with 100% whole wheat flour. If using part or all whole wheat flour, add a few minutes to the kneading time to help develop the gluten. Orange-Infused: the rolls are for an orange-infused cinnamon roll. Beyond delicious. If you prefer traditional cinnamon without the orange flavor, simply leave out the orange zest in the filling and omit the orange zest and juice from the glaze, adding more milk for perfect consistency. You can also use the buttermilk cream cheese glaze from this recipe. Make-Ahead: this post details how to make sweet rolls ahead of time. Buttermilk: here is a guide for making your own buttermilk.

Bosch Universal Stand Mixer
Follow @MelsKitchenCafe on Instagram and show me the recipes you are making from my blog using the hashtag #melskitchencafe. I love seeing all the goodness you are whipping up in your kitchens!

Disclaimer: I am a participant in the Amazon Services LLC Associates Program, an affiliate advertising program designed to provide a means for me to earn fees by linking to Amazon.com and affiliated sites. As an Amazon Associate I earn from qualifying purchases.
Breads Breakfast Christmas Cinnamon Rolls Desserts Easter Breakfast Brunch Holiday Gift Giving Make-Ahead Breakfast Rolls Yeast Yeast Breads