If talking about baby back ribs could make one giddy, this is the recipe to bring it out in me.

I haven’t been this excited about a recipe since at least Monday. And actually, the next four days or so of posts are going to be killer. Killer.

Think of it as the ultimate Father’s Day menu coming your way (with one of the most amazing giveaways to date this Friday). Seriously, I can barely stand it; I wish I could share it all with you right now.

The anticipation is making me very hungry.

Father’s Day aside, though, I happen to personally be a huge fan of ribs. Which just goes to show that you don’t have to be a father to love ribs, and furthermore, ribs shouldn’t be shoved into the men-only corner of the food world.

Am I right or am I right? It’s easy to be intimidated by the messy, saucy, tender, boney things, but the truth is, ribs are so easy and so flavorful.

And if they are prepared the right way, you get crazy delicious thrown in there too.

This old oven-baked ribs recipe has been a favorite in our house for years. But if you are looking for a slow cooker version with an amped up semi-homemade BBQ sauce (root beer forever!), today’s recipe is for you.

The only disclaimer I have to offer for this baby back ribs recipes is that thanks to the magic of the slow cooker, the ribs are unbelievably tender – so tender that it’s almost impossible to pick them up like traditional ribs.

We still ate them with our fingers (because why not?) but the meat was literally falling off the bone without any effort on our part. You could most definitely resort to knife and fork here or even cook up the ribs, slide the meat off the bones (honestly, it will take .5 seconds because it’s so, so tender) and serve the flavorful chipotle-root beer sauce slathered over just the meat.

No bones.  On a huge platter.  Set in front of my plate.

Heavens, these ribs are fantastic. 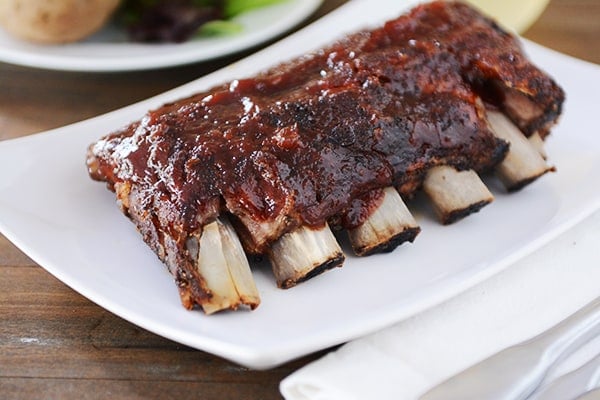 On an unrelated note, I’ve been forgetting to tell you (shame on me!) that I’ve added four new Summer-Lovin’ menu plans to the lineup of free, downloadable weekly menu plans here. So there’s that.

And also, my sweet friend Reyna (who partnered with me on the Let’s Talk: Cooking with Kids post) and I had a very fun Skype chat and she’s sharing all the details of our Q&A on her YouTube channel (and yes, I talk just as much with my hands in real life as I do on the video; I usually warn people to back up a little when conversing with me so as not to come to any harm).

So check it out if you want to get up close and personal (no really, I was sitting very close to my computer screen, yikes). 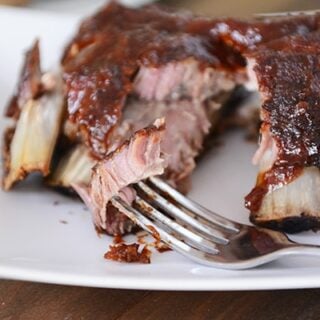 Rib Preparation: ok, let's talk. Baby back ribs are simple to prepare but you do want to make sure you remove the membrane/silver skin from the underside of the ribs. Here's a simple how-to; the trick is using a paper towel to help grip the membrane as you peel it off.

Root Beer: also, when it comes to root beer, brand matters. Choose a root beer that tastes good. Sounds silly and simple but it's really important. We're A&W fans around here; as long as you like the taste drinking it straight, you're good.

Slow Cooker: finally, slow cookers. I used my 10-year old oval slow cooker that I think is right around 6-7 quarts. The oval shape is ideal for these ribs; however, I still had to cut them in half so if you only have a round slow cooker, try cutting the ribs into smaller pieces and stacking them on top of each other or side-by-side.

Recipe Source: adapted from Cuisine at Home (used chili powder instead of chipotle powder, reduced the amount of chipotles to tone down the heat, broiled instead of grilled)