Well, first of all, holy cow, you guys. Thanks for all your words of wisdom and support after last week’s training update. I felt a little needy after I posted it, but man, I tell you, your hearty “you can do this” comments definitely got me over the bump of a rough first week. I know I’m not out of the woods yet (read: preparing for rough weeks ahead) but thank you so, so much. So many of you have been running for years and your advice and expertise is invaluable to me right now. It’s like my own personal team of coaches (except I’m kind of glad you aren’t here in person to shout at me to go faster). Love you guys for that.

After the first week, I didn’t know if I was going to be pleasantly surprised by the week’s workouts or dead on the ground.

Turns out, it was a little of both.

-I followed my training schedule exactly and for a schedule-obssessed personality like mine, that was comforting in and of itself. Check, check, check. Love the sound of that.

–I embraced the treadmill. Brian was gone all week to Oregon (his dad had open heart surgery and he was there helping out and thankfully, thankfully, thankfully, his dad is doing well); being without a partner-in-parenting-crime and knowing that pushing the double jogger with two tons of toddler weight inside was not my idea of fun (plus it rained a lot this week), I knew it was treadmill or nothing. And I guess in a weird way, I was kind of grateful I at least had it here as a backup. It actually wasn’t so bad after I succumbed to Netflix. Catching Fire to be exact. I was still dying and sweaty and totally out of breath, but Katniss and Peeta definitely helped the time speed by, although Katniss’ cool calm and svelte body and hardcore stamina made me kind of want to puke. 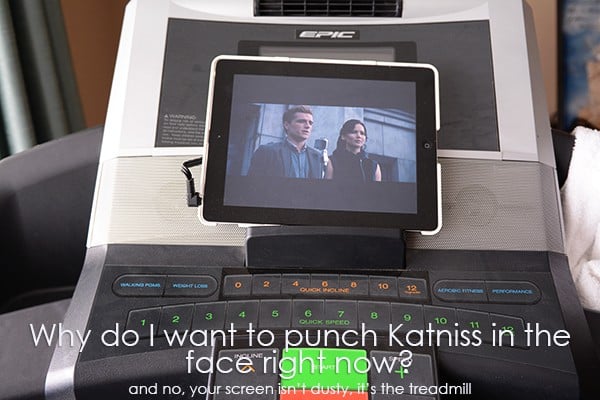 -I decided not to even care how fast I was going. After lamenting last week about feeling so slow – dozens of you commented with insight about running times and I realized that I’m actually ok with my pace. I know if I push it, I’ll be miserable and maybe injured, plus I told myself over and over this week that the fact that I was running was a step in the right direction and it didn’t matter how fast I was going. I think I stayed about the same pace as the first week (about a 5.3 to 5.5 on the treadmill). And honestly, this race is not about speed for me. It’s about finishing and accomplishing a goal.

What Didn’t Work So Well

–The treadmill. I really wanted to run outside for at least one or two of the runs but it didn’t work out that way thanks to what I talked about above. The difficulties were that because of where our treadmill is – when I tried to wake up early to run while the kids were sleeping, it woke everybody up. Awesome. Then, when I tried to run while my two littles (ages 6 and 2 1/2) were running around after the three olders were at school, it resulted in Camryn (the 2 1/2 year old) getting her fingers pinched in the treadmill (so lucky it wasn’t worse) because in her words “I need you, mom!” which she reminded me of by trying to hold onto my legs the whole time I was running. So much for pulling out all the shelved toys I could think of for them to pass the time (we’re talking 30 minutes here, I’d hate to think of the reality if I was running for hours like some of you crazy awesome souls). I muddled through and finished the runs but those sessions probably weren’t my most favorite of all time in the history of ever, if you know what I mean.

–I was certain I’d get an outside run in on Saturday morning. But, I think due to the stress of the week or maybe my kids’ coughy germs, more like, I started feeling sick around Thursday night. I guzzled water, drenched myself in my favorite essential oils, loaded up on Vitamin C, tried to go to sleep at 10 p.m. instead of midnight and thankfully I wasn’t feeling any worse by Saturday morning…but not a whole lot better either. Because I was feeling a little nauseous, I decided it was a treadmill run or nothing at all – just in case I felt sick enough I needed to hop off and collapse. (In the end, I ran the three miles with no problems and actually think exercising that morning helped kick my system into gear – I felt pretty good the rest of the day. So yeah, here’s me always thinking the worst.) 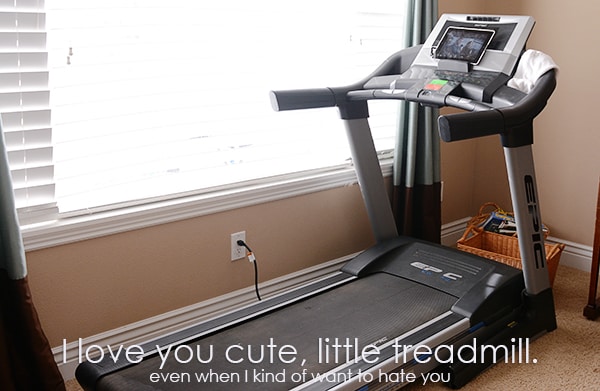 -After several recommendations, I picked up the book: Run Less, Run Faster. I’m not sure I really needed this book quite yet. It’s focused a lot on increasing your pace and getting a new PR and qualifying for Boston and stuff like that (and like one of you mentioned last week, since this is my first half-marathon, I’ll already have a PR; sweet!). But I did like reading about why they encourage the 3Plus2 philosophy (run 3X a week and cross-train 2X a week). Dude, you don’t have to sell me on the philosophy of running less. I took some notes while reading the book but got waylaid (I started reading it while sitting next to my kids who were watching the old school version of Where the Red Fern Grows and had to abandon reading when my two oldest boys started bawling their eyes out when Dan died and it only got worse when Ann died of a broken heart – and then before I knew it, we were all crying and the running book was completely forgotten until the next day). I learned a lot about running form, stretching, nutrition and how to avoid some common injuries and I think there are parts of it I’ll refer to along the way although I’m not going to change my training schedule or anything like that. I don’t have the option to do any of the cross-training they recommend either (swimming, biking or rowing) so this week I’m going to figure out some cross-training options that are lower impact and maybe do strength-training those days.

-The nutrition thing got me thinking that I should probably do something official to track my calories – mostly so I can make sure I stay at my target goal (only a target goal after reading the book above and even then, I don’t really know if I need to worry about this yet – advice?) of getting 65% or so calories from carbohydrates, 20% from fat and 15% from protein. I don’t like counting my calories. I love food. We all know that. But I usually do a lot of subbing out carbs when we eat rice or bread or the like with dinner (like using quinoa or cauliflower rice, etc) and basically, I just want to see where I’m at with my eating. I downloaded the MyFitnessPal app on my phone. It gets me all sorts of hivey and anxious to input my food – like there’s some nutrition sergeant looking over my shoulder – but I have to begrudgingly admit that it has been helpful to see exactly what I’m eating and how it plays out on the percentage spectrum. I don’t plan to change much of how I eat. I haven’t felt like I’ve been lacking in energy to finish a run but that train of thought is also kind of laughable since I’m only running a whopping 2-3 miles which I’m pretty sure is not exactly considered taxing. I already eat a lot of fruits and vegetables, whole grains and overall a pretty balanced diet. If anything, when I increase mileage about halfway through the program, I might need to up my carbs just a bit. 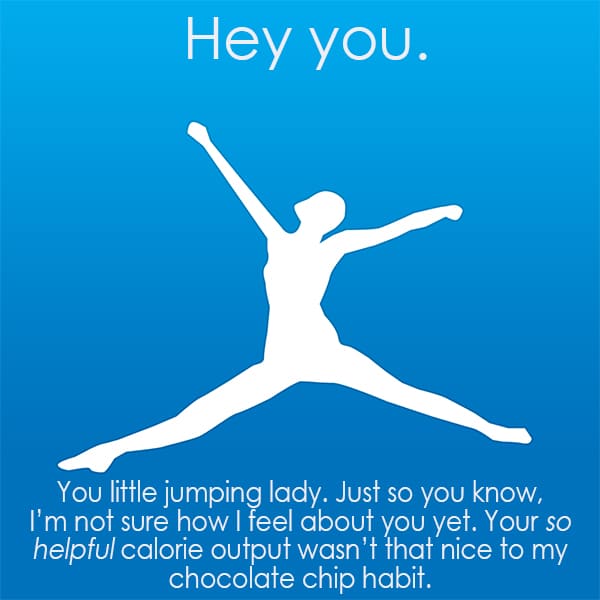 Sorry this has gotten a little long and windy. Again, this is mostly a journal for me to remember where I’ve been and where I’m going. If you are still reading, have a handful of dark chocolate chips on me. You deserve it.

I have to give a shout out to Brian and the boys for running, too. They have their eyes set on the 10K in June and have been running 1-2X a week. They went out and ran close to three miles on Saturday morning. Even despite Jackson falling on the sidewalk (they have referred to it all weekend as “the sidewalk splat”) and getting some road rash on his shoulder and hands and legs, they kept running and came home in good spirits (it didn’t hurt that Brian kept enticing them with visions of German pancakes for breakfast after the run). I’m proud of them! They help motivate me and keep me accountable even when I want to hide under the covers and not run for ten more years. 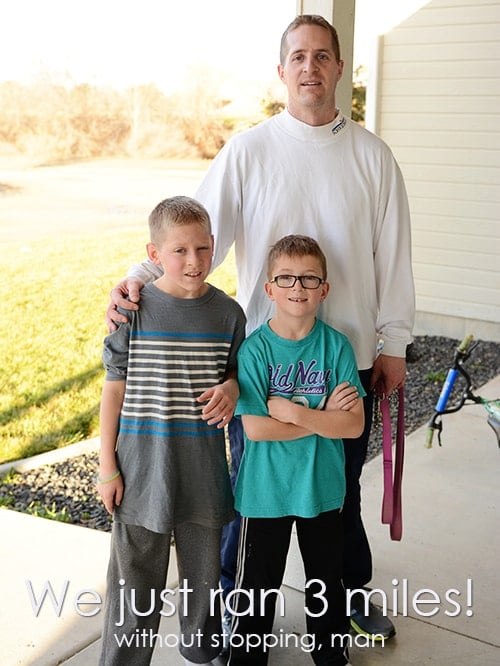 -Not a lot of changes this week. My miles increase just slightly: 3 miles on Monday, 2 on Wednesday and 3 on Saturday.

-I have an ultra-busy week (don’t we all?); literally each day is scheduled from sun up to sundown so I’m going to have to be really, really dedicated to the training schedule and fit running/exercise in wherever I can, even if it means super early in the morning (party in the entryway after the kids wake up, oh yeah!) or late at night. I’m determined to do it, though.

On another note, if you didn’t get a chance to see Jill’s crazy/amazing/inspirational story posted last week, you just have to. I watched her video a dozen times, at least, last week and felt renewed each time (plus, I about cried when I saw Jamie’s comment in the thread about how it helped her). I’ll be posting a few new stories this week, too, so check back on the main Running Page if you are interested in reading those.

Thanks again, everyone, for making this experience doable and dare I say: fun (kind of).

Also, if you are following along on a similar schedule or just running in general, I’d love to hear how things are going for you, too!