Get this easy, no-stir recipe for delicious, chewy cinnamon caramels plus instructions on how to dip them in luscious chocolate!

If I told you that upon finding one of these cinnamon caramels that had somehow fallen behind the nutella jar in my pantry (don’t ask why I was that close to the nutella jar) two weeks after I had made them and without thinking I picked up that beautiful, and slightly wrinkly, caramel and ate it without a second thought and savored the gloriousness of it’s buttery, cinnamony, chewy deliciousness…well, if I told you that, would it adequately convince you of how insanely delicious these babies are or simply gross you out?

If it’s the latter, just pretend like you didn’t just read that first paragraph.

They are honestly the most delectable little caramels in all the land. You get the rich chewiness of the caramel with the slight heat of the cinnamon.

My friend Lisa told me about these last year in the comments of my black licorice caramels (also amazing) and I waited all year to try them so I didn’t ostracize myself and lose all my friends by doing something weird like making caramels in June.

I’ve made up for the lack of cinnamon caramels in my life by making at least four batches in the last several weeks.

They are severely delicious on their own but you might as well try a few dipped in chocolate. It’s a simple process that will elicit fabulous results.

I’ve unloaded lots of pounds of cinnamon caramels on lots of people lately and they are getting lots of rave review. One bite and there’s an element of “hmmm, what is this pleasantly and weirdly sweet hot caramel thing I just bit into” followed by a “oh, yeah, baby, cinnamon and caramel; I’m hooked.” You know, those kind of rave reviews.

If you are wanting a step-by-step tutorial for the caramel, follow the pictures in this recipe (it’s the same recipe except for omitting the vanilla and adding the cinnamon and red coloring at the end).

I’m pretty sure if you’re looking for the holiday recipe to win you fame and fortune (or at the very least, lots of friends), it’s going to be these. Don’t wait like I did, make ’em soon.

Also, stay tuned tomorrow for two video tips that will make dipping anything and everything in chocolate easy peasy lemon squeezy. 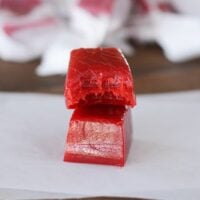 Food Coloring: if you want to avoid using red food coloring, you can leave it out – the food coloring doesn’t make it taste any more or less cinnamony. I use the Wilton no-taste red food coloring gel. Cinnamon Flavor: I used this extract that I bought (has great reviews) on Amazon since I couldn’t find it at my small local grocery store. Using the amount in the recipe, the caramels are pleasantly cinnamony without being spicy or hot. Add more cinnamon extract if you want to amp up the cinnamon flavor. Also, if you are using cinnamon oil instead of cinnamon extract, add with care – it’s much, much more potent than cinnamon extract. Video Tip: here’s a quick video tip on tempering/melting chocolate and another on dipping things in chocolate like a pro. Chocolate: my preferred brand of chocolate is Ghirardelli.
Serving: 1 Caramel, Calories: 149kcal, Carbohydrates: 19g, Protein: 1g, Fat: 9g, Saturated Fat: 5g, Cholesterol: 28mg, Sodium: 61mg, Sugar: 18g

Instant Read Thermometer
Follow @MelsKitchenCafe on Instagram and show me the recipes you are making from my blog using the hashtag #melskitchencafe. I love seeing all the goodness you are whipping up in your kitchens!

Recipe Source: adapted from my favorite foolproof, no-stir caramel recipe after my friend Lisa C. gave me the fabulous idea 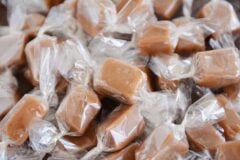 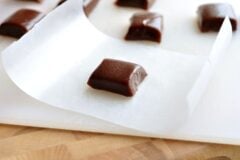 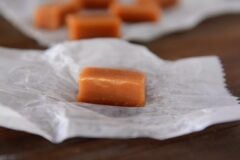 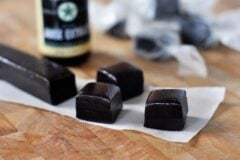 Disclaimer: I am a participant in the Amazon Services LLC Associates Program, an affiliate advertising program designed to provide a means for me to earn fees by linking to Amazon.com and affiliated sites. As an Amazon Associate I earn from qualifying purchases.
2017 Christmas Faves Candy Christmas Egg-Free Holiday Gift Giving Neighbor Gifts recipes forgot christmas cookies The Best Holiday Baking Recipes

77 Comments on “Cinnamon Caramels {Chocolate Dipped If You Dare}”