Made in the slow cooker OR pressure cooker, the pork for this Cuban sandwich recipe is out-of-this world tender and so flavorful. Plus, the unique and delicious combo of sandwich ingredients makes this one of my favorite sandwiches ever!

Have you ever had a Cuban sandwich?

Oh my goodness, they are amazing.

You know how much I love a good sandwich, and I’m telling you, even though I’m a fairly new convert to Cuban sandwiches, they are hands down one of my favorite sandwiches ever.

Quite a while ago, as I was testing recipes, I posted on Instagram about the almighty Cuban sandwich and was surprised at how many of you are fans of this surprisingly delicious combo!

It made me feel all warm and fuzzy inside knowing I wasn’t alone in my love.

And I’m unapologetically excited to finally be adding a recipe for these dreamy sandwiches here on the blog – cementing this Cuban sandwich recipe into eternal internet permanence.

I’m not claiming this recipe is the most authentic or classic. I’ve never had a real, live Cuban sandwich other than in the privacy of my own home or a bite of Brian’s one time at Cafe Zupas (which I’m sure is not 100% authentic).

But I CAN tell you that this juicy, tender pork slow cooked (or pressure cooked!) in a flavorful, citrus broth is crazy delicious.

And adding that pork on a soft, squishy roll or bun (more on that in a sec) and layering on mustard, thinly sliced ham, Swiss cheese, pickles and red onions?

Well, it might be the best decision you’ve made all week.

You can serve the sandwiches just like that…or you can live on the wild side and griddle them or cook in a panini press for a golden, toasty, melty, glorious sandwich.

If sandwiches aren’t your thing (who are you??), simply make the pork and serve it in tacos or atop a salad. I promise you won’t be disappointed.

There is all sorts of tastebud magic happening with these Cuban sandwiches (thanks, in part, to the tasty pork that makes up the main foundation of the dish).

As for bread, it’s probably no surprise that an authentic Cuban sandwich is often served on…wait for it…Cuban bread!

I learned, thanks to a google search, that Cuban bread is long, thin, soft, and often made with lard (so it crisps up without getting super tough and hard).

Since I don’t have a Latin bakery close to me, I haven’t tried my hand at homemade Cuban bread yet. These French bread rolls (whole wheat version here) always do the trick for a delicious Cuban sandwich.

I make them slightly bigger (about 3 to 3.5 ounces of dough per bun) and longer, similar to a hoagie bun shape. I use my baker’s lame – a sharp razor blade – to slash the top of the dough before baking to give that classic split-top shape.

The homemade rolls are soft and super delicious; the perfect vehicle to carry all the yumminess of a Cuban sandwich.

I’m sure a variety of soft, storebought rolls or buns would work here as well. Honestly, the Cuban sandwich police are not going to show up at your door, so use what you prefer and enjoy every bite.

If you have never had a Cuban sandwich, I hope you end that travesty immediately!

In the directions of the recipe below, I’ve given cooking methods for either a slow cooker or pressure cooker. I’ve made the delicious, flavorful pork both ways, and either one works great. 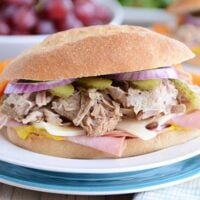 Nutrition Facts: the nutrition facts for this recipe were calculated based on the pork (but do not include the buns or sandwich toppins as those are added based on personal preference).  Buns: an authentic Cuban sandwich is usually served on Cuban bread, which, thanks to a google search, is soft and often made with lard (so it crisps up without getting super tough and hard). I don’t have a Latin bakery close to me, and I haven’t tried my hand at Cuban bread yet, because these French bread rolls (whole wheat version here) always do the trick for a delicious Cuban sandwich. I make them slightly bigger (about 3 to 3.5 ounces of dough per bun) and longer, similar to a hoagie bun shape. Soft and super delicious. I’m sure a variety of soft, storebought rolls or buns would work here as well.  Pork: if you make the full five pounds of pork, you’ll get a lot more than eight sandwiches. I almost always make a full five pounds for this recipe because the leftover pork freezes so well – which means easy, delicious sandwiches later, OR, we use the leftover pork in tacos, enchiladas, for salads, etc. Slow Cooker: if your slow cooker tends to cook hot (even on the low setting), you might want to add the 1/2 cup chicken broth, intended for the pressure cooker method, so the pork doesn’t dry out while cooking.
Serving: 1 Serving, Calories: 328kcal, Carbohydrates: 1g, Protein: 65g, Fat: 5g, Saturated Fat: 2g, Cholesterol: 176mg, Sodium: 1069mg, Fiber: 1g, Sugar: 1g 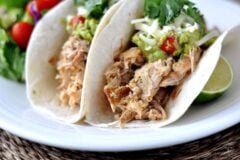 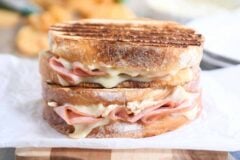 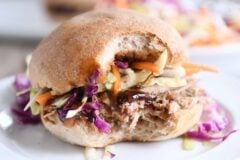 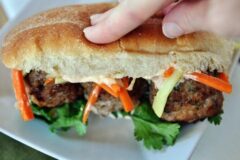 Disclaimer: I am a participant in the Amazon Services LLC Associates Program, an affiliate advertising program designed to provide a means for me to earn fees by linking to Amazon.com and affiliated sites. As an Amazon Associate I earn from qualifying purchases.
Instant Pot Pressure Cooker Main Dish Pork Recipes Sandwich Wraps Slow Cooker The Best Sandwiches Wraps 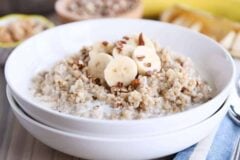 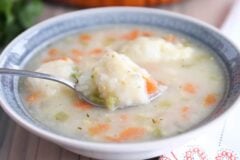 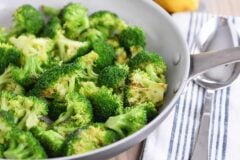 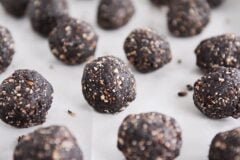