A perfectly delicious meatless meal – these spinach and cheese enchiladas are simple to make and packed with flavor! 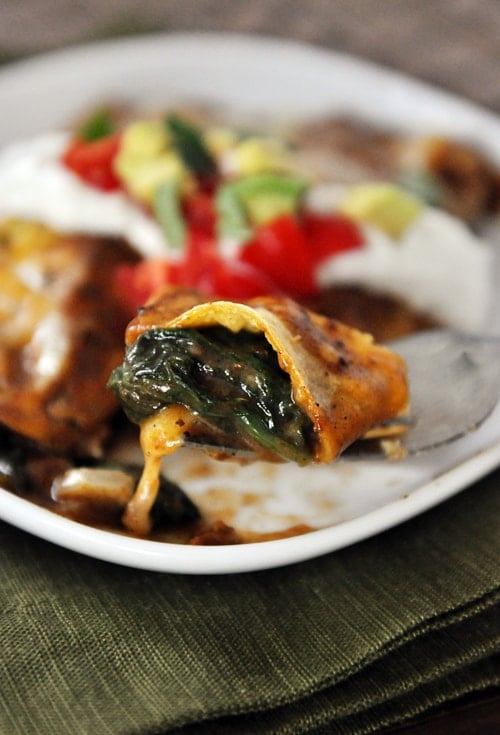 While some of my friends have spent the first month or so of summer dreaming of beach vacations and sunning in the warm weather and eating pounds of popsicles, I’ve been obsessed with spinach and cheese enchiladas.

So. Yeah. Socializing with me is a little weird sometimes. All I can think about is food.

Spinach and cheese enchiladas in July to be exact. Although in my defense, I also spend an inordinate amount of time dreaming about ice cream which evens things out, right?

Even though they are baked, these spinach and cheese enchiladas are light and refreshing enough to enjoy year round.

No heavy Mexican food sitting in your belly all evening. Packed with layers of flavor (the simple sauce alone is delicious enough to be deemed drinkable), they definitely make it into the running as one of my favorite enchilada variations. 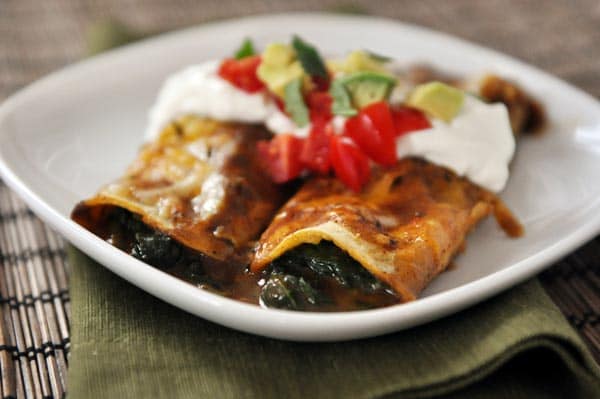 I’m usually kind of against corn tortillas except in rare instances (don’t hate) and prefer flour tortillas, but in experimenting with this recipe, I tried both and the corn tortillas were a clear winner in the family taste test (6 thumbs up, 1 thumb down which was Camryn and she’s two and I don’t mean to be rude but her vote doesn’t really count because she was throwing huge-tantrum-of-the-year whilst voting because she wanted banana yogurt instead of dinner and I think her thumb was down unintentionally).

I won’t even think of subbing them out for flour tortillas ever again – the taste and texture of the corn tortillas compliment the tender spinach, creamy cheese, and smoky, warm spices in the sauce perfectly.

July or not, these are some seriously yum spinach and cheese enchiladas.

Toppings: although listed as optional in the recipe, I highly recommend serving these with toppings like sour cream, avocado, tomatoes, etc. The different textures and flavors of the fresh toppings are woooooonderful on the smoky, tasty enchiladas.

Recipe Source: inspired by a recipe in Cook’s Country Feb/Mar 2014 (original recipe was for cheese enchiladas, I made a spinach and cheese version, changing whole spices for ground, and altering the method and other ingredients) 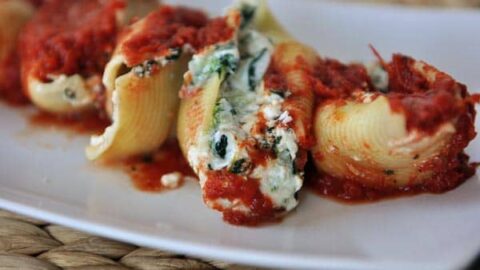 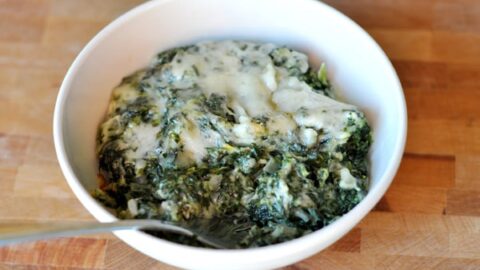 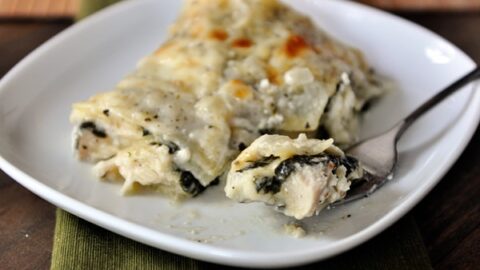 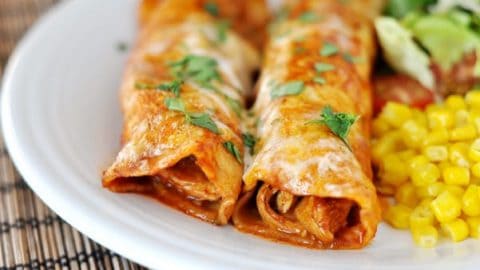 43 comments on “Spinach and Cheese Enchiladas”