A super simple homemade egg noodle recipe complete with step-by-step pictures and details on using a food processor or making by hand!

Homemade egg noodles are not part of my every day routine but I kind of wish I had a magical way to make enough time in the day so they were. I love them.

They are homey and comforting and insanely yummy.

Plus, I know we’ve been talking a lot about rock star status lately and how to achieve it in the kitchen but homemade noodles can skyrocket you right to the top of the rock star awesomeness list.

And they are super easy. Super, dee-duper easy.

Because I love you, I included a step-by-step tutorial below the recipe and added pictures for both the by-hand method (go, you!) or the food processor method (while easier, you’ll still get rock star points).

Other than mixing a simple dough, letting it rest, rolling and cutting into strips, there’s nothing tricky here.

And if you have a real, life pasta roller machine, you can use that for rolling and cutting the dough (sometimes I pull mine out but most often, if we aren’t doing a fun homemade pasta night with lots of sauces and toppings and just want homemade noodles for, say, chicken noodle soup, I do it the old-fashioned way – rolling pin and pizza wheel because I don’t like cleaning my pasta maker; I’m lazy like that).

And if you want a real cheater method for chicken noodle soup, here’s our go-to variation on nights I haven’t prepped a whole, delicious chicken in the crockpot: I fill a 6-quart or so pot 2/3 of the way with good-quality low-sodium chicken broth (right now the Kirkland brand at Costco is my go-to), add chopped carrots, celery, salt and pepper and a bit of dried thyme, cover and simmer for 15 minutes or so until the veggies are mostly tender. Toss in leftover cooked chicken or rotisserie chicken (off the bone, obvs) and egg noodles (these homemade noodles can totally be made in advance and frozen or use store bought) and simmer until the noodles are cooked but not mushy.

My kids can down chicken noodle soup like no other.

It’s some kind of super human achievement that I’m hoping gets them into a good college some day. And when I happen to make chicken noodle soup with homemade noodles? Totally time to triple the recipe. 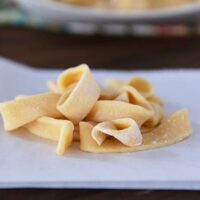 Noodles: so a batch of these noodles is the perfect amount for a very large pot of chicken noodle soup. I usually use half a batch of noodles for my family of seven (5 kids, 2 adults). The other half keeps great in the refrigerator or frozen (once they dry out a bit, see the last step in the recipe). Tutorial: there’s also a step-by-step tutorial below the recipe for those interested in pictures of the process. Cooking Time: also, when using homemade noodles in a recipe – if they are brand, spanking fresh (meaning they haven’t dried at all), they’ll only need a couple minutes in boiling water until they are tender. Even if they’ve dried a bit, they’ll cook in far less time than packaged noodles from the store.

Pizza Cutter
Follow @MelsKitchenCafe on Instagram and show me the recipes you are making from my blog using the hashtag #melskitchencafe. I love seeing all the goodness you are whipping up in your kitchens!

Recipe Source: from Mel’s Kitchen Cafe (based on an old recipe my mom made growing up) 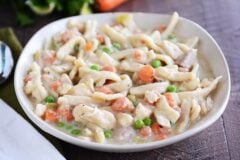 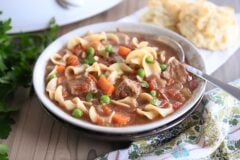 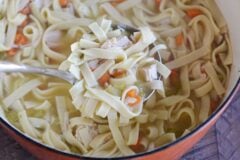 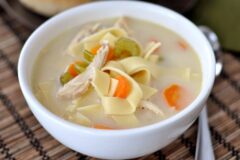 Disclaimer: I am a participant in the Amazon Services LLC Associates Program, an affiliate advertising program designed to provide a means for me to earn fees by linking to Amazon.com and affiliated sites. As an Amazon Associate I earn from qualifying purchases.
Pasta Tutorials