Hearty and delicious, this flavorful slow cooker beef vegetable noodle soup couldn’t be easier! Everything (including the noodles!) cooks right in the slow cooker. 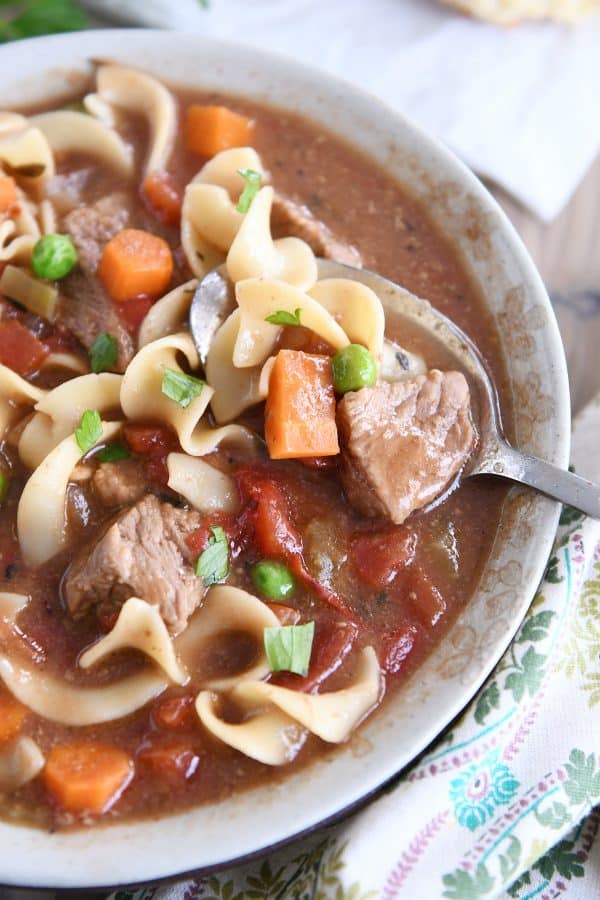 I’ve already declared that January exists (and is manageable) largely because of soup. And this slow cooker beef vegetable noodle soup only confirms that.

First of all, everything cooks in the slow cooker. Yes, that means the noodles, too. This saves time, dishes, and a whole lot of sanity. In fact, nerdy as it sounds, it makes me very, very happy to say: go ahead! live on the edge! throw those uncooked noodles in the slow cooker and walk away!

I promise it all works out in a very hearty, delicious, flavorful way. Those tender chunks of beef + noodles + vegetables + slow cooked seasonings and broth are fantastic.

And with all the rage around Instant Pots and pressure cookers these days, isn’t it time we gave the slow cooker a chance to shine again? 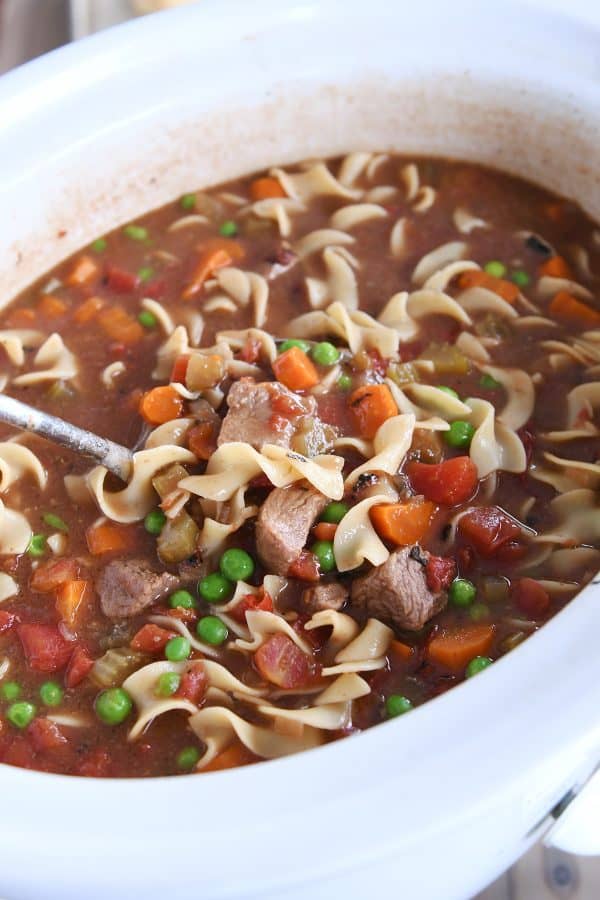 We already have chicken noodle soup, why not beef noodle soup? With vegetables! And in the slow cooker! I think it is a very good idea.

This slow cooker soup definitely has a beef stew vibe to it (especially if you choose to thicken it at the end – details below). And the noodles are a totally pleasant and wonderful addition.

It is so, so yummy and the perfect, EASY meal for these frigid months.

Into the slow cooker 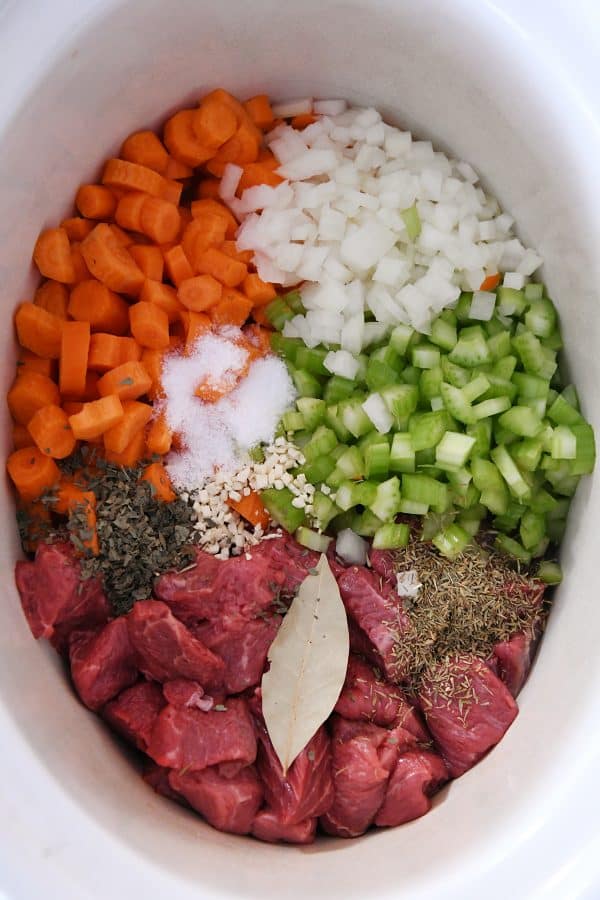 Then pour in some good old-fashioned beef broth.

Actually I’m not sure that beef broth is old-fashioned, but either way, you’re going to need about eight cups total. Seven cups go into the soup right now; the last cup is reserved to help thicken the soup at the end of cooking. 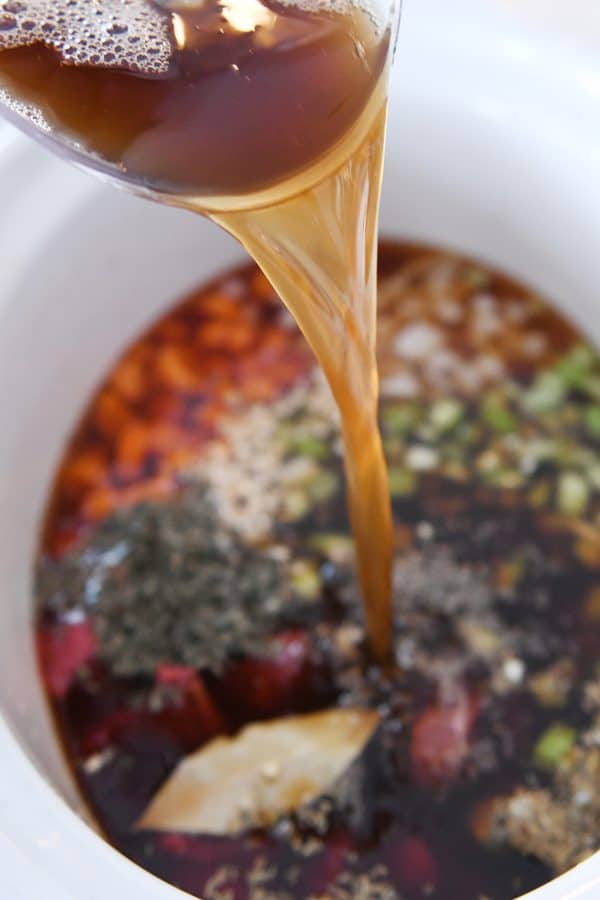 It doesn’t look like much, but you’re house is going to smell really, really good while it’s cooking.

Also, last reminder: don’t forget the tomatoes. I remembered to add mine about an hour into cooking. No harm done. Phew. Glad this soup is so forgiving.

Cover the slow cooker and cook on low for 7-8 hours or on high for about 4-5. It’s done cooking when the beef is fall apart tender and the veggies are tender. 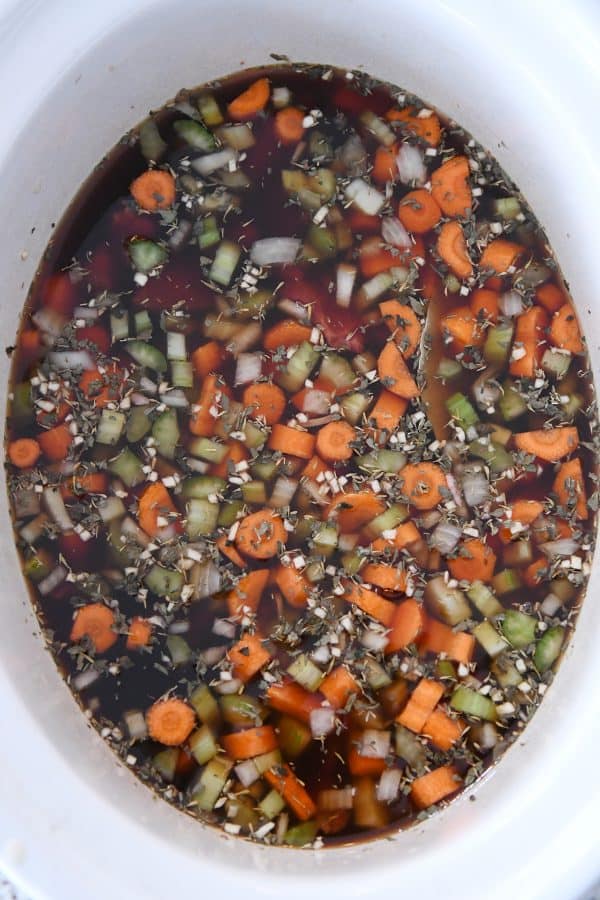 Cooking Pasta in the slow cooker

Now for the fun part. Add the uncooked egg noodles right into the piping hot soup. Extra wide or wide noodles are appropriate and acceptable.

Stir the soup so the noodles are mostly submerged, cover, and cook on HIGH for about 10-20 minutes until the noodles are tender. The exact time will depend on the type of noodles, the brand of slow cooker, and your faith and diligence.

It’s pretty hard to overcook them with that timeframe, so don’t overthink it. 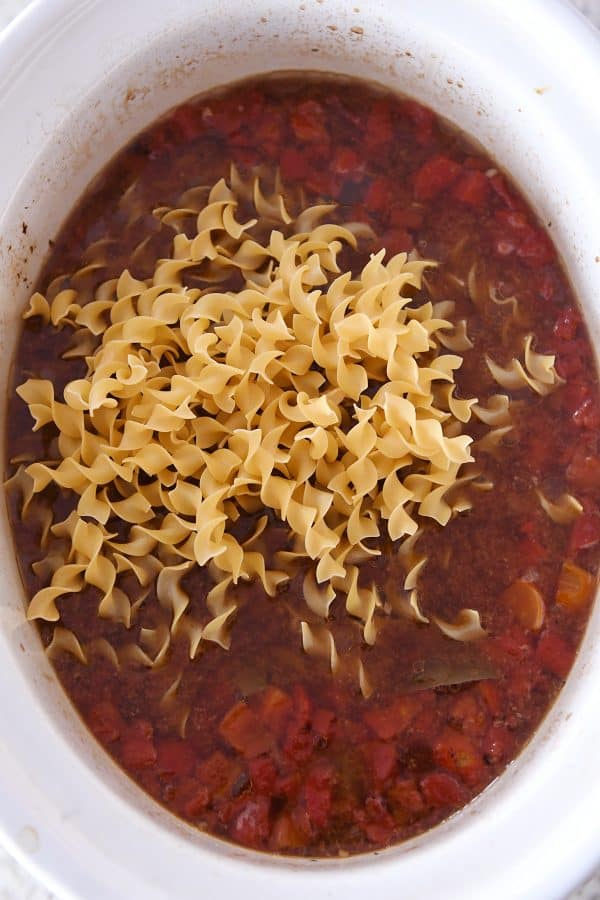 Last week, I actually made this soup start to finish, let it cool to warm room temperature, and then I popped the whole thing in the refrigerator for two days.

It was a lifesaver on a few really busy weeknights. The noodles were slightly softer and the soup was much thicker, but it was still might tasty.

The whole family raves about this slow cooker beef vegetable noodle soup. There’s a lot to love in that jumble of noodles and veggies. 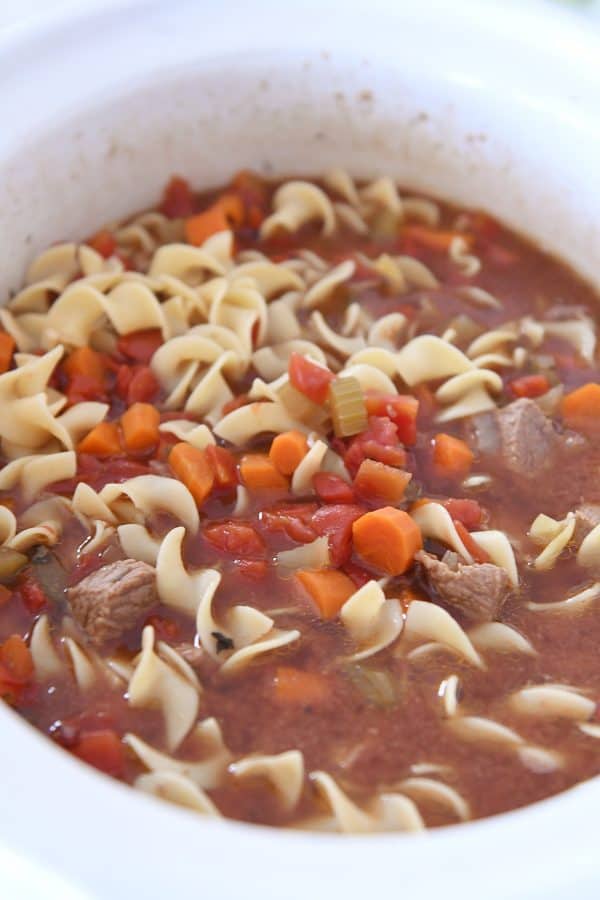 To thicken or not to thicken

At this point, you can stir in the peas and call it good OR you can thicken the soup just slightly.

I like to thicken it – that’s what gives it a delicious beef stew flair.

Whisk together cornstarch or flour into that last remaining cup of broth until there are no lumps, and then stir that mixture into the slow cooker. Keep the slow cooker on high and let everything warm through and thicken slightly for a few minutes. 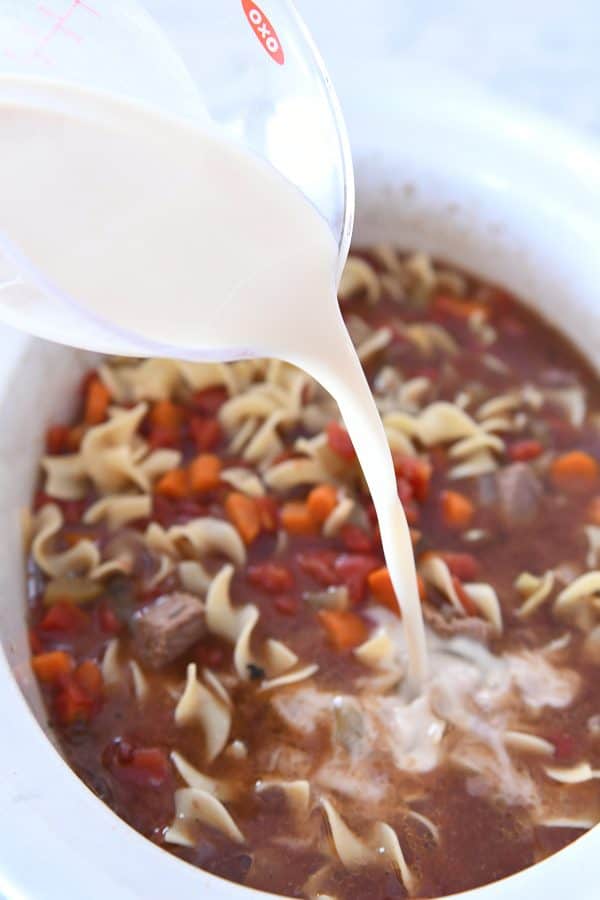 Throw in the peas. No need to let them thaw. They’ll do that on their own in the piping hot soup.

And it’s also a great way to cool the soup down just a little if you’re serving it immediately. 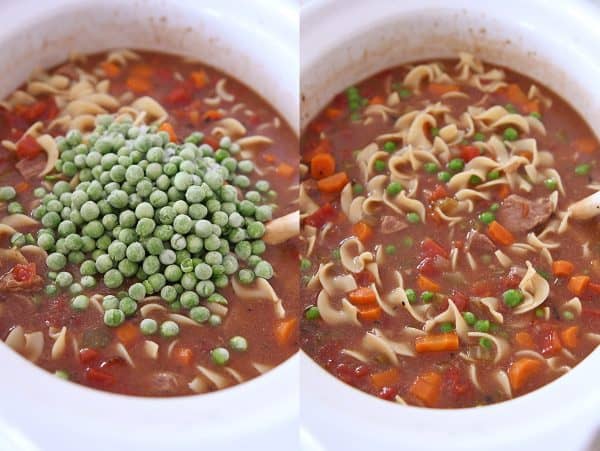 It’s kind of pretty with all those colorful veggies. And look at the tomatoes! See? I promised I added them, and I did. I actually used fire-roasted tomatoes in this batch, and it was delicious!

The soup will thicken a bit as it cools, especially if leftovers are refrigerated.

This is such a delightful slow cooker meal. It’s hearty and nutritious and just straight up tasty. 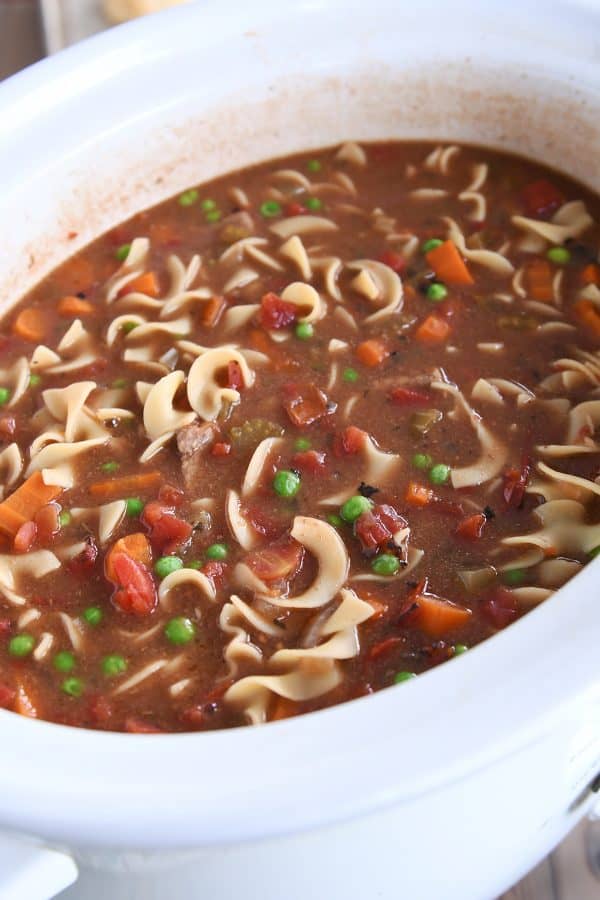 Since I know it’ll be asked (I know you guys pretty darn well!), I’m sure you could transition this to an Instant Pot recipe, but I haven’t tried it and I have the following concerns/recommendations: 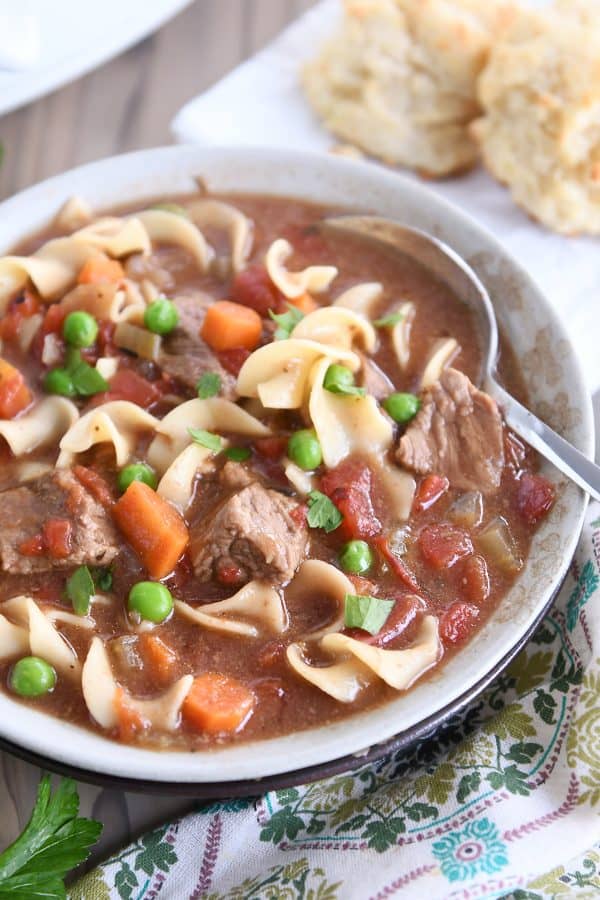 Easy drop biscuits or cornbread or French bread rolls
Sliced cheese (maybe that’s just us, but we love eating slices of cheese with our stews and soups) 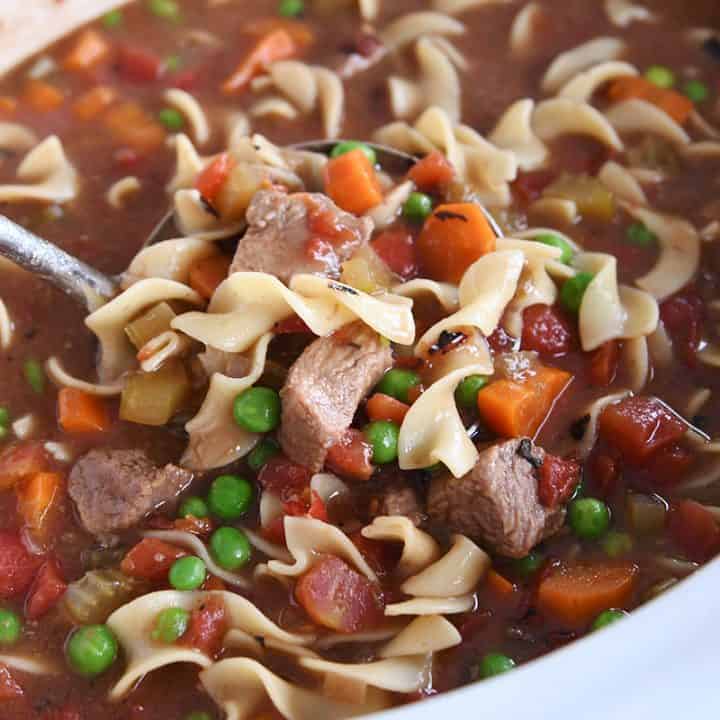 Beef Broth: you'll need two quart cartons or cans of beef broth for this recipe. You'll use seven of those cups at the beginning and save the last cup for thickening the soup at the end of cooking.

Thickening Soup: thickening the soup is optional; doing so gives it a delicious beef stew vibe. 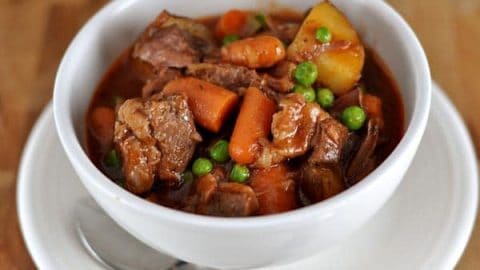 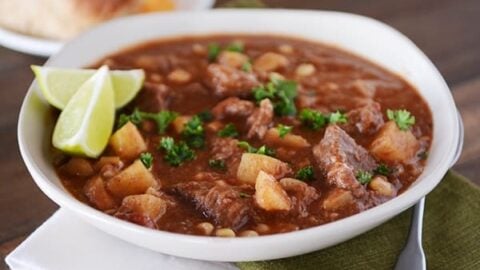 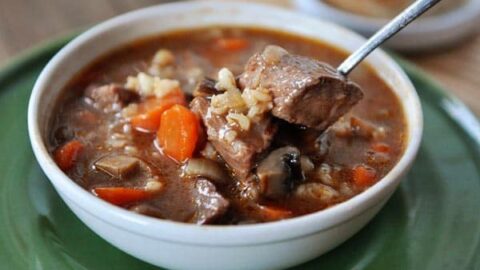 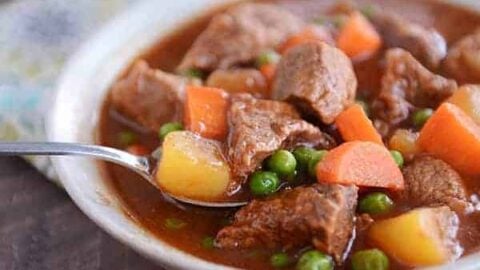