This easy apple crumble pie has all the gloriousness of classic apple pie with the added gift of a buttery, streusely, crumbly topping that is so yummy, you’ll cry. 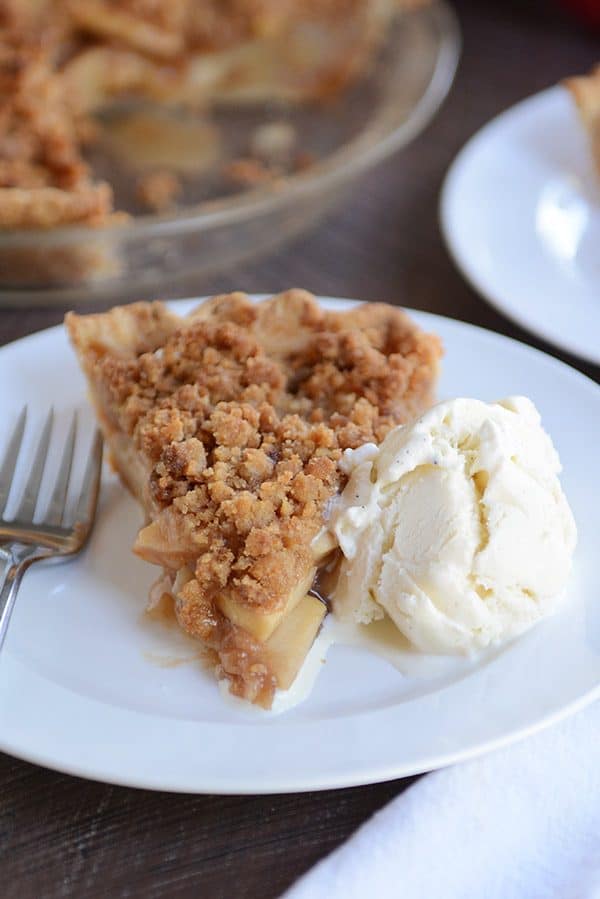 If your main goal in life is to have random, paint-splattered, unknown dudes give you a heartfelt, and dare I say, tearful, hug over pie, you might want to consider making this apple crumble pie.

This totally happened to me a few months ago.

I made this apple pie as an incentive for people to help with a friend-of-my-son’s Eagle scout project.

Because nothing says: GET PAINTING, YOU TEENAGERS! like the promise of homemade pie, right?

With peach pie and this apple crumble pie on the offering block, after devouring, it was clear this apple pie was a huge favorite by a few of the dads there. 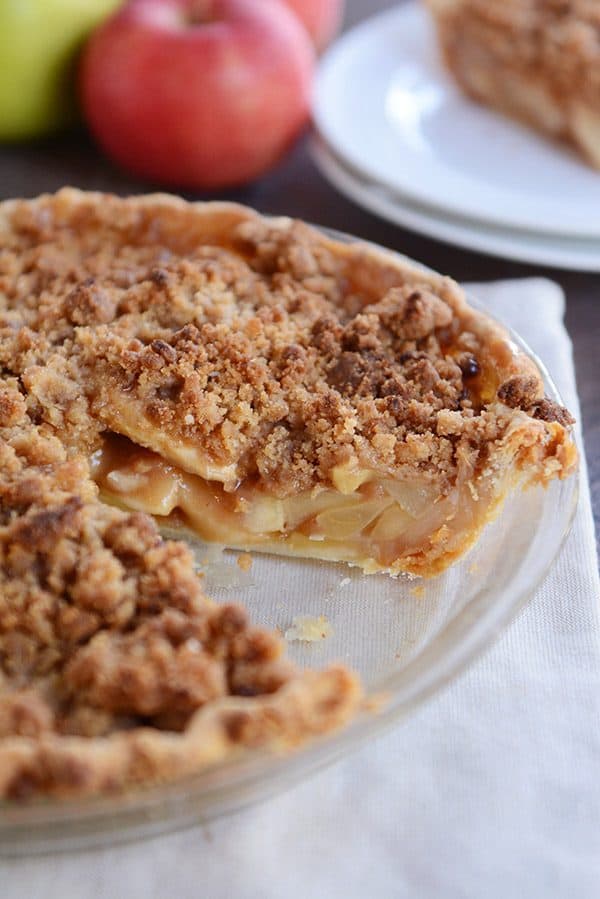 I can’t say as I really blame them.

As someone who cares deeply about food, this apple crumb pie really is delicious enough to warrant an emotional reaction.

And if you’re sitting there wondering why I’m posting a new-ish apple crumble pie when I have a perfectly good apple crumb pie already posted from years past?

And further, the apple crumble pie you’re staring at today, is, quite simply, better.

I know that’s sometimes tough to hear, especially if you love that old apple crumb pie, but I can’t lie to you.

With all of the other apple pie recipes out there in the interwebs (and on my blog), this easy apple crumble pie has become one of my favorites. 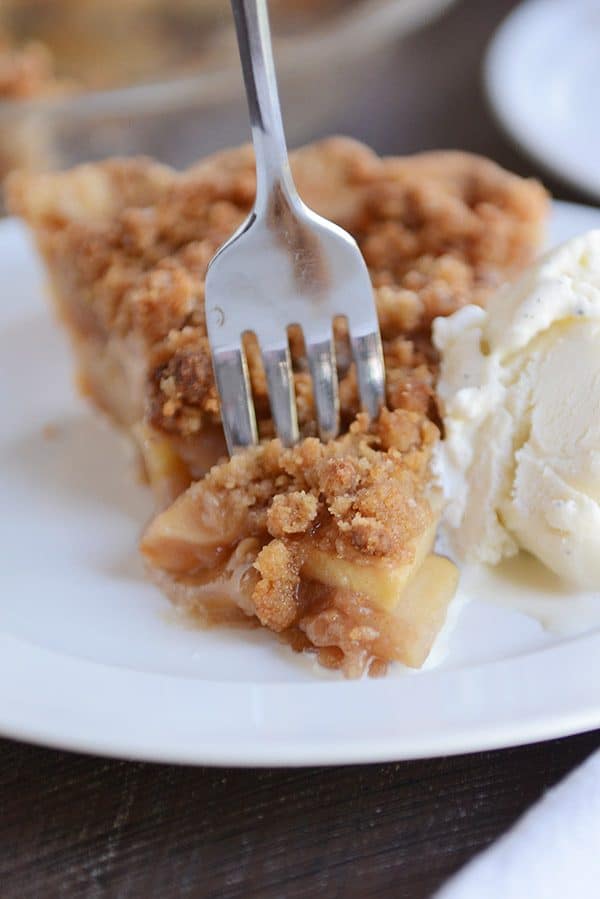 The filling gets an extra boost of flavor from brown sugar, which creates a syrupy, almost caramel-like flavor and texture as the pie bakes.

So yeah, big yum factor there.

And that buttery, golden crumble topping?

I mean, I won’t judge if you find a way to pilfer it off everyone else’s piece of pie before they notice that their pie is nekked and lonely.

It’s kind of that good. 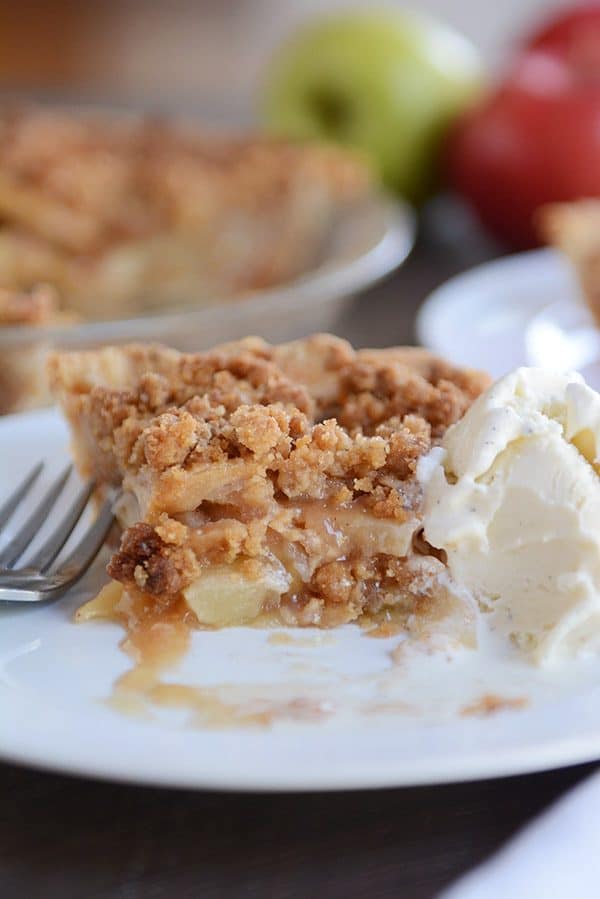 If you are looking for a pie addition to your upcoming Thanksgiving menu, this apple crumble pie should not be discounted!

Served a tiny bit warm with a scoop of vanilla ice cream, you might have found the only thing I even want to eat on the big day.

As noted in the recipe, I use my favorite sour cream pie crust for this pie. The flavor is out of the world with those juicy, sweet apples.

You could also use the easy, new recipe I posted last month during Pie Boot Camp.

Or, yes, even a storebought crust (gotta do what you gotta do sometimes). 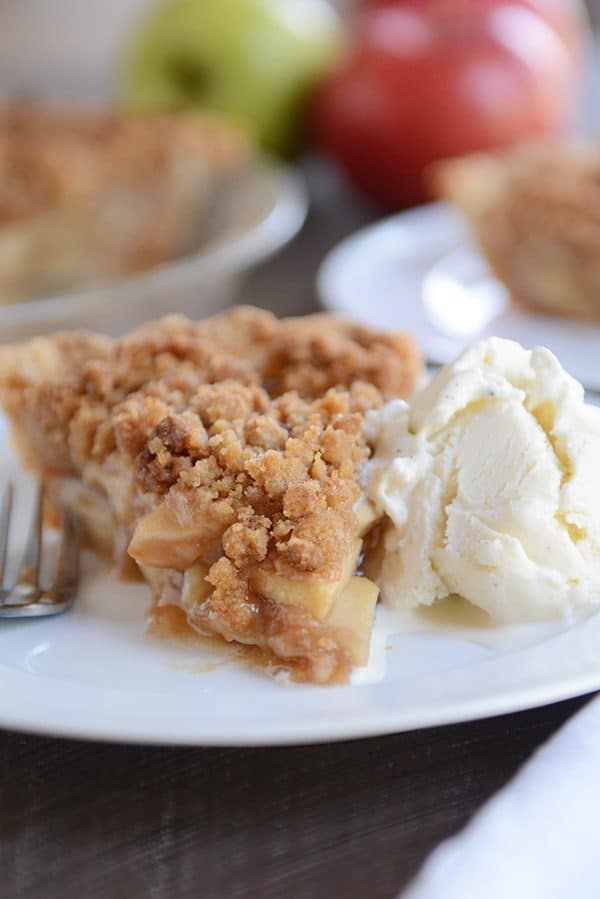 This pie has definitely earned a spot in the The Best Recipes category for pies.

It is so, so good…and pretty darn easy by homemade pie making standards.

I don’t want to offend my much-loved Blue Ribbon Apple Pie, but I think it’s getting bumped in favor of this delicious apple crumble number.

At least this time, I’m pretty safe knowing I’ll be surrounded by family on Thanksgiving. So…you know, the pie-inducing hugs will probably be a bit less awkward. 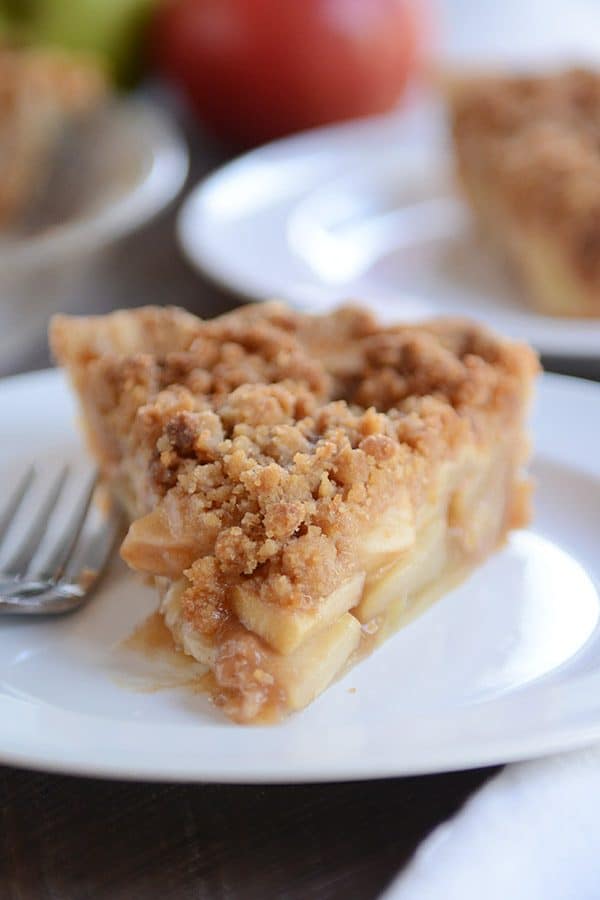 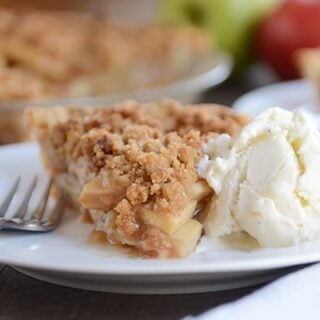 Pie Crust: my favorite homemade pie crust is this one. It includes a picture and video tutorial. I also have another (slightly easier) go-to pie crust recipe here along with a full tutorial on rolling out the crust, fitting it into the pie plate, and crimping the edges.

﻿For Apples: I prefer using Honeycrisp, Pink Lady, Fuji, or other sweet-tart, crisp apples. A variety works well, too! I haven't used Granny smith apples in this recipe (but it would probably work fine). As the recipe states, you'll need about 6 medium-large apples, which will be about 40 ounces by weight. Once they are peeled, cored and sliced, you'll end up with about 6-7 cups of sliced apples (24 ounces or so). 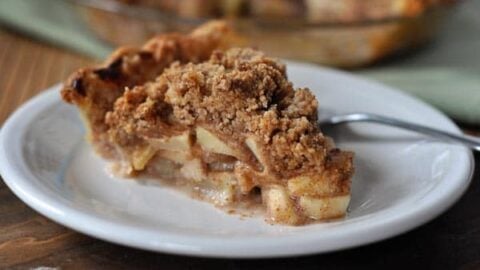 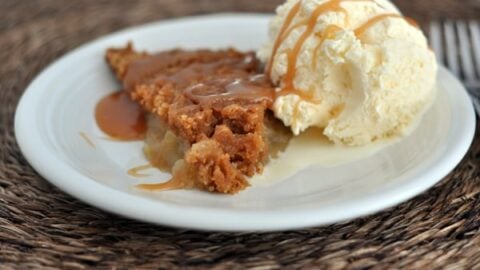 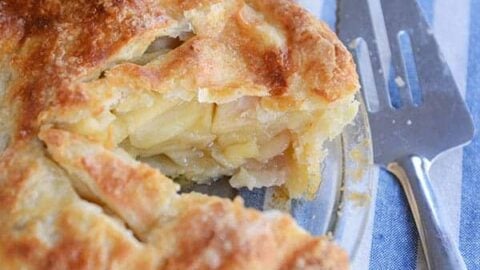 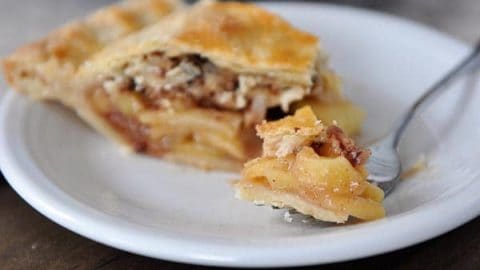