These easy and flavorful enchiladas are seriously the best red sauce chicken enchiladas on the planet. Simple pantry ingredients for a fantastic result! 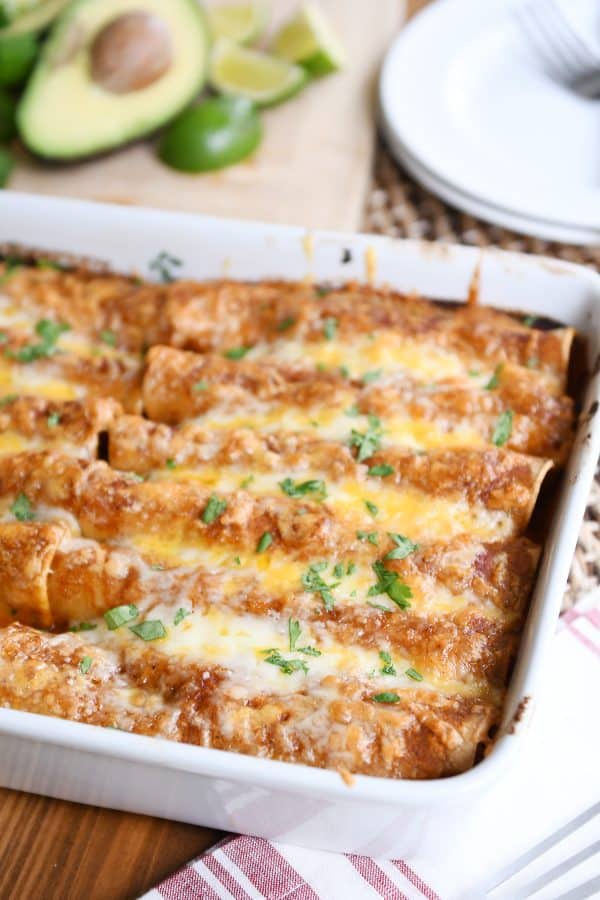 All that changed when I made these red sauce chicken enchiladas. {Now’s the time to say: I’m sorry for my enchilada narrow mindedness.}

Wow, they are so good. Like, life changing good. And delicious enough to get me to admit that I’d be just as happy to see these on the table as I would my favorite white sauce enchiladas. I know. This is huge. 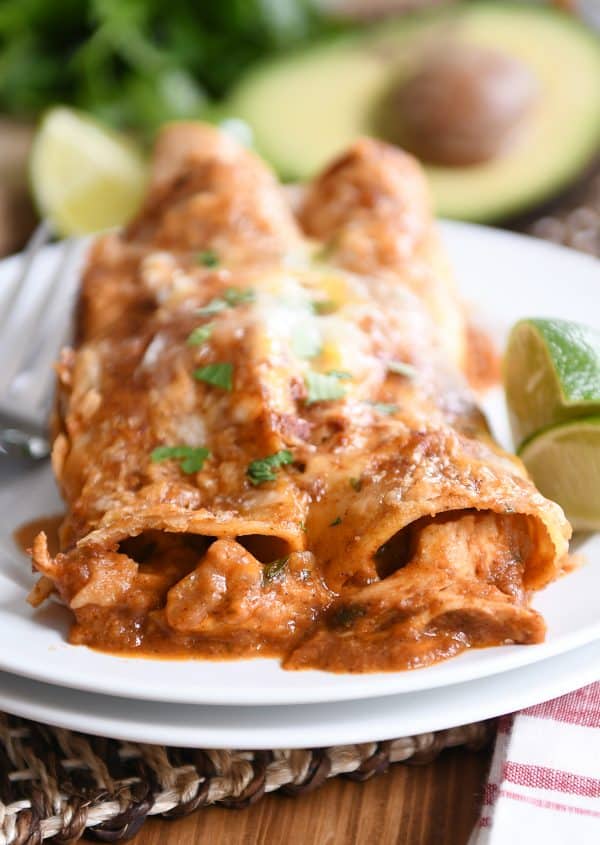 Everyone is allowed their personal enchilada opinions. And we can still be friends if you are team white sauce forever. But if you’ve been looking for the best red sauce chicken enchiladas, I can assure you, these are the ones.

Flavorful without being fussy

Even though they are made from-scratch, they don’t take all day to make. And they don’t require any hard-to-find ingredients. Pantry staples. Fantastic results.

The cooking process is simple and relatively quick as you build layers of flavor.

First, onions and jalapeños cook together until tender (I give some notes in the recipe about spiciness – even with the jalapeño, it’s not an overly spicy dish). Chili powder, a bit of sugar, cumin and garlic are added, and the mixture cooks for just a minute or two. Your house is going to start smelling amazing.

Add tomato sauce and water to that delectable spice/onion mixture. You are basically making your own homemade enchilada sauce. It is crazy delicious. 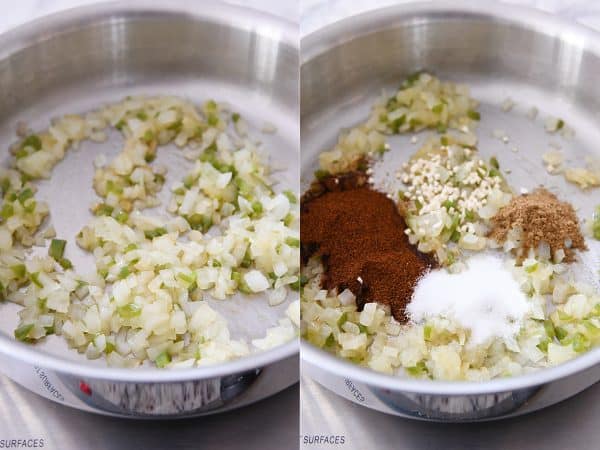 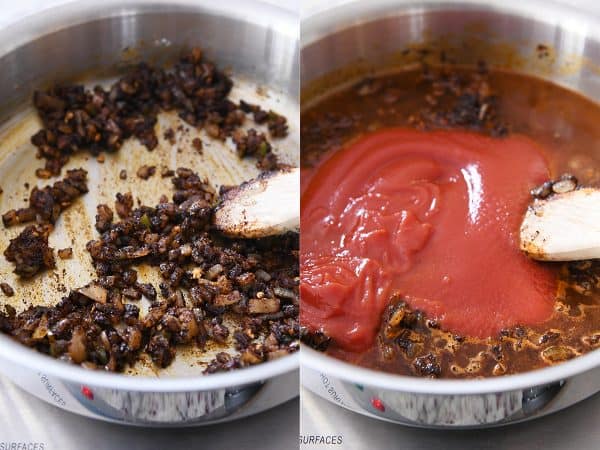 The chicken nestles right into the sauce and cooks, covered, for a few minutes until tender and juicy. Don’t overcook the chicken! It’ll be tough and rubbery if you do. And you’ll be sad and then I’ll be sad. Chicken usually doesn’t take quite as long to cook as some people think. For thicker chicken breasts, you’re probably looking at 12 minutes or so and a few minutes less for thin cut chicken.

Can beef sub in for chicken?

That’s a great question. I have never tried it in this recipe (probably because I’m a devout fan of these slow cooker shredded beef enchiladas), but I’m guessing it will work just fine. Beef will need a longer cooking time, and the cut of meat will be important to ensure tenderness and not toughness. You could probably use ground beef, too – just cook it in a skillet on its own instead of in the sauce. 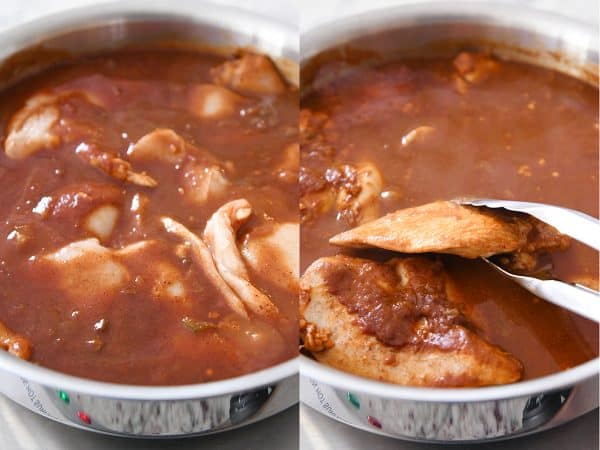 After the chicken cooks, pull it out with tongs and let it rest on a plate or in a dish for a few minutes while you strain the sauce.

You’re going to use both the sauce and the onion mixture, so don’t discard either. Press on the solids to get as much flavorful sauce into the bowl as you can. 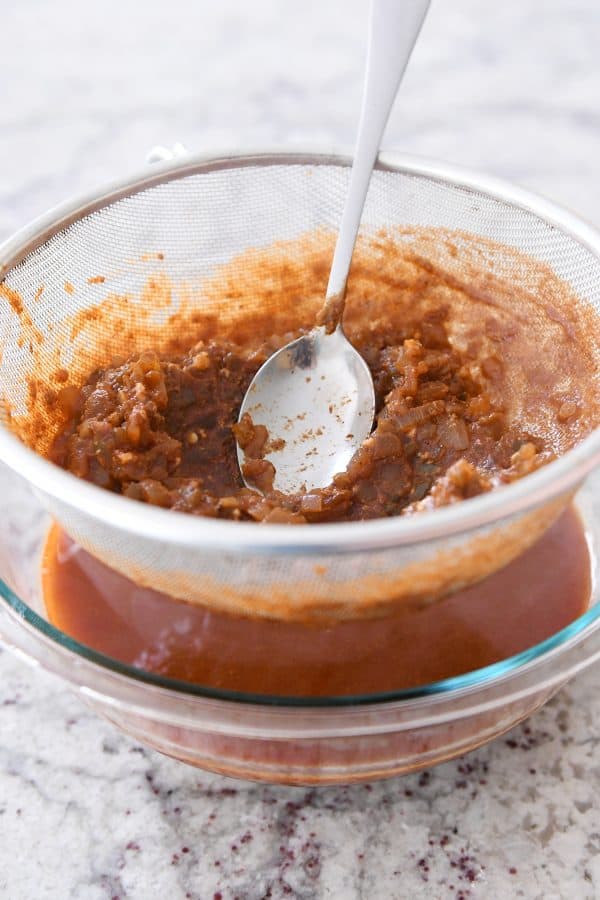 The onion mixture gets tossed with the shredded chicken, cilantro and cheese. It may not look like much, but it is so, so good. Seriously, at this point, it’s almost beyond my self-control not to eat this entire bowl before it is even rolled up in enchiladas.

Which makes me think it would be fantastic in burritos, quesadillas or even on a salad. 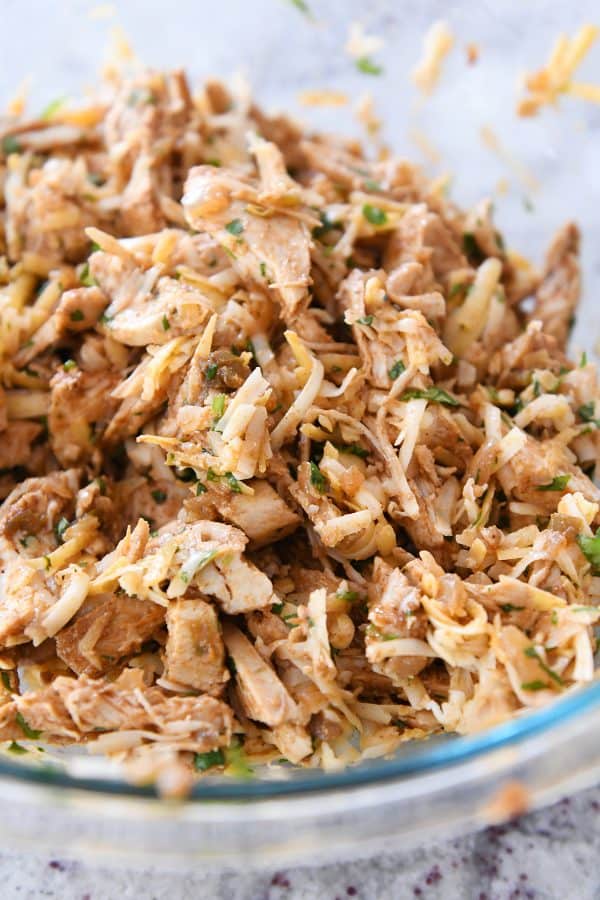 You can use either corn or flour tortillas in these enchiladas. I use both and love both. It really does boil down to taste preference. The corn tortillas don’t get quite as soft while baking – they retain more of an al dente, firmer texture.

If using corn tortillas, it’s really important to warm them slightly before using – either in a skillet or in the microwave (I cover with a damp paper towel so they don’t dry out). Otherwise, they have a tendency to crack. My favorite corn tortillas are the Tortilla Land ones that you quick skillet-cook before using. They aren’t dry like a lot of store bought corn tortillas and don’t crack as much (especially if they are warm).

But flour tortillas work equally as well. I like to use 6-inch tortillas or thereabouts for these enchiladas. 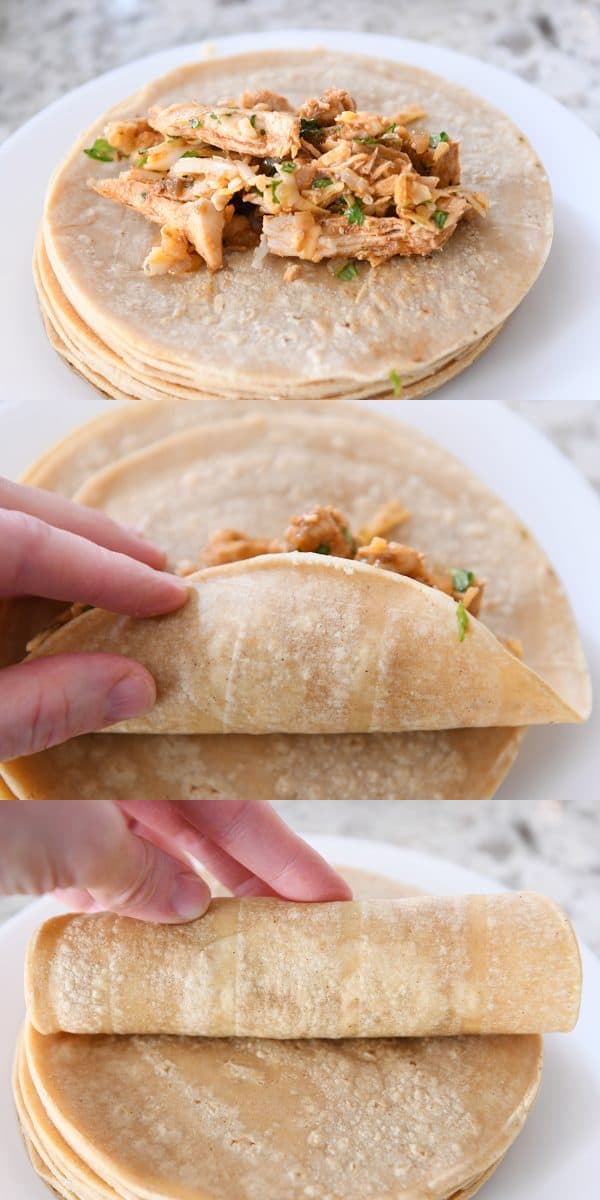 Twelve little enchiladas packed in a dish all ready to get smothered in sauce and cheese. Talk about a good life.

The strained sauce goes over the top followed by the cheese. I use a blend of Monterey Jack and sharp cheddar. You guys know I have to go here: if you can, grate the cheese from a block vs buying pre-shredded. It will melt worlds better (pre-shredded cheese is coated with a powdery substance that makes it melt less well).

I feel like right now would be a good time to post a selfie in my t-shirt that says: I Shred My Own Cheese, Dang It, And So Should You. (Not a joke, I legit have a shirt that says that thanks to a hilarious friend who dropped it by after my last diatribe about grating your own cheese.) 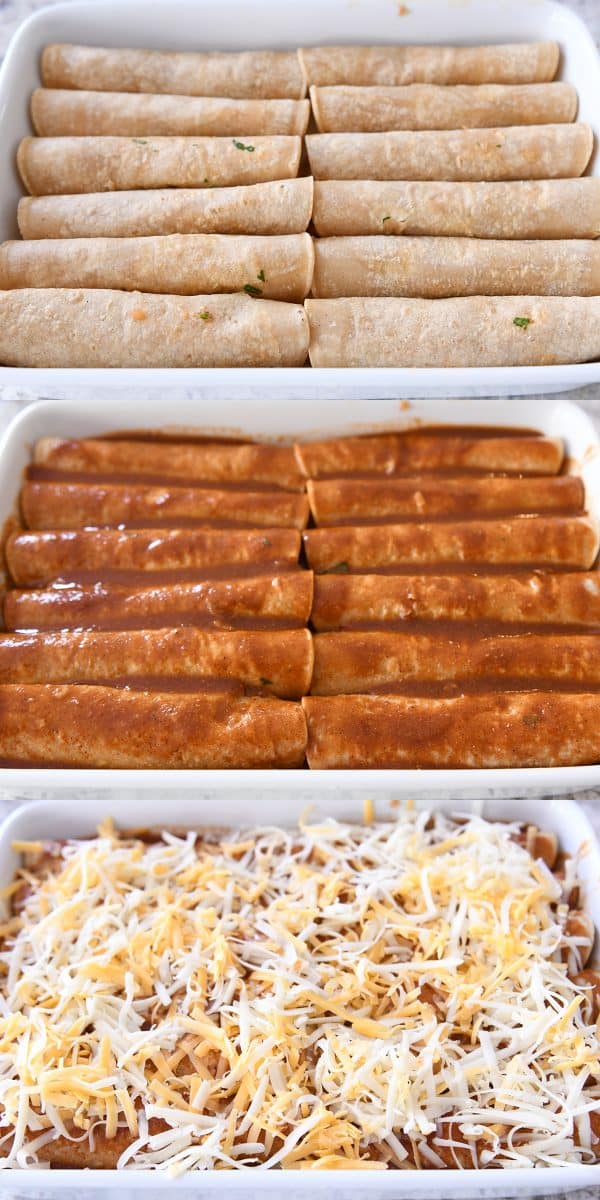 Those glorious saucy, cheese-smothered enchiladas get baked for 20-30 minutes until golden and bubbly.

Let them rest just a few minutes and then dig in. They are fabulous served with lime wedges, avocados, fresh cilantro, sour cream, salsa. Or…just plain and simple. The flavor is out of this world delicious. 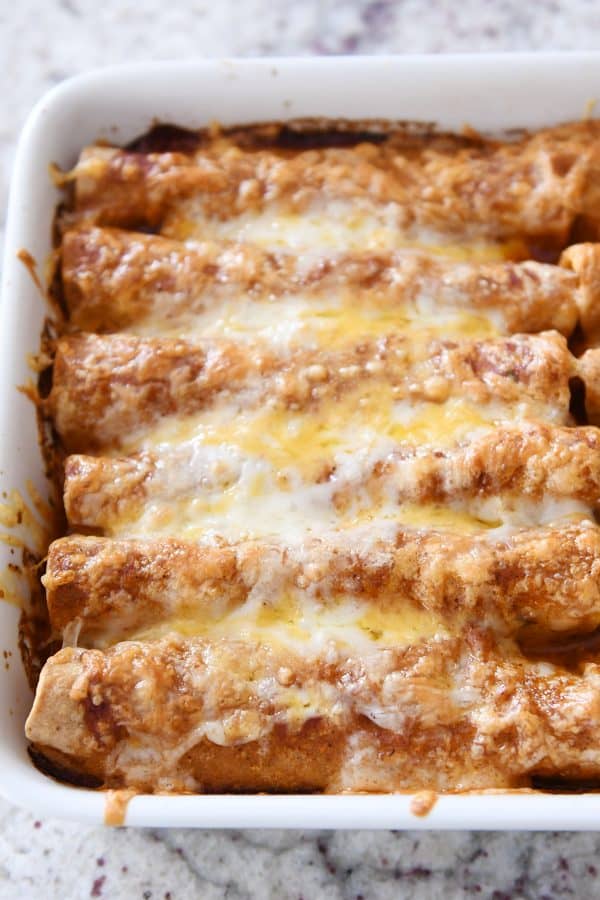 Enchiladas certainly aren’t the prettiest things to eat. They’re a little messy. A little down to earth. A little all over the place. Kind of like me, come to think of it.

But man, they sure are delicious.

This recipe converts great to a make-ahead or freezer meal. The enchiladas can be made and assembled up to 24 hours in advance. Cover, refrigerate, and then bake per the recipe (maybe adding a few extra minutes to account for them being a lil’ bit chilly). They can also be covered with a double layer of foil and frozen for a month or so. You can thaw them in advance of baking or bake from frozen (see the notes of the recipe for details).

Making ahead of time and/or freezing means the tortillas will probably be slightly softer after baking, but it’s not a deal breaker to us. We love them so much. 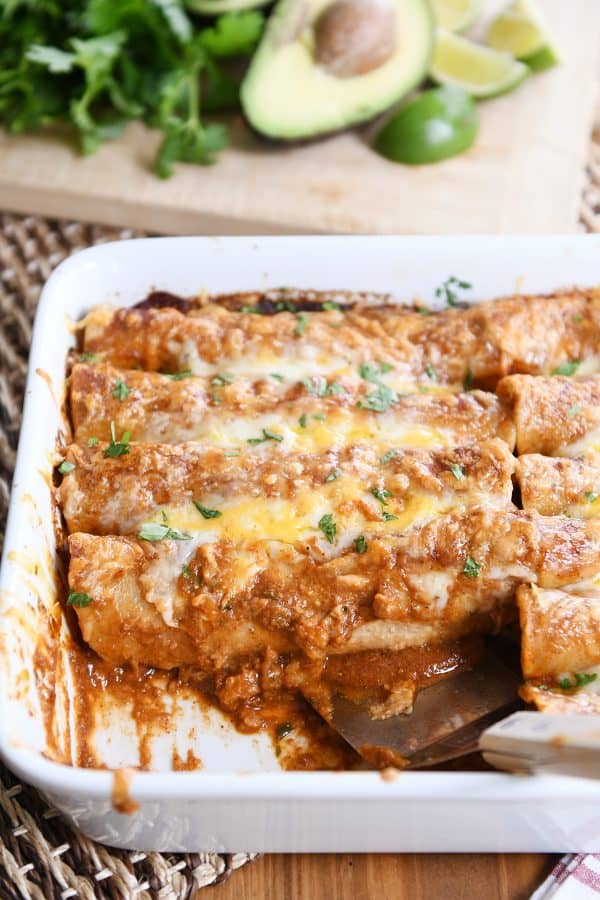 The search is over

I first posted this recipe way back in 2011, and eight years later, they’re still a huge favorite. I’ve never even branched out to another red sauce enchilada recipe since then, that’s how much I love them. Some may question my sanity at times (myself, included), but never, ever question my loyalty to recipes that become tried-and-true favorites.

I know I’m not the only one who has searched high and low for the best red sauce chicken enchiladas. If you’re in the same camp, I can’t wait for you to try this recipe. 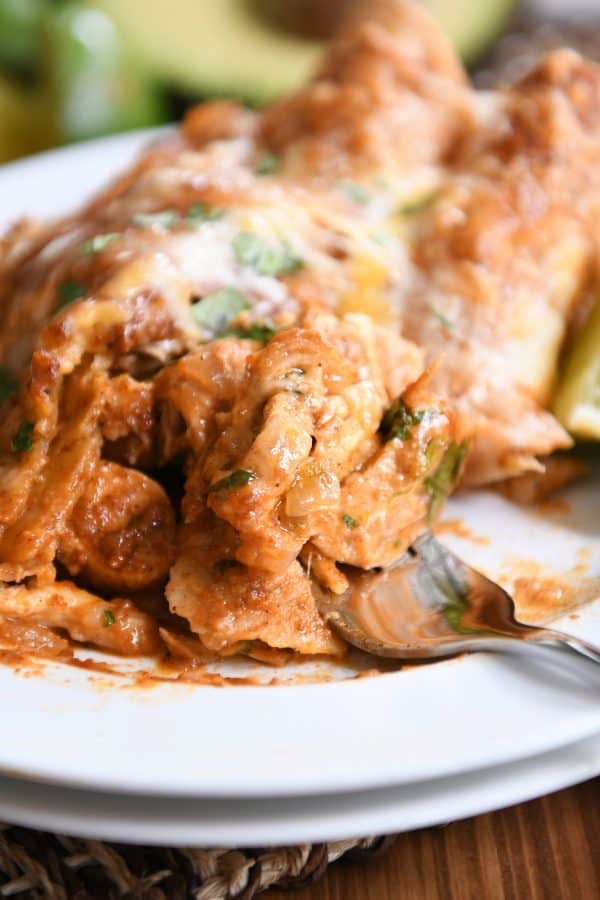 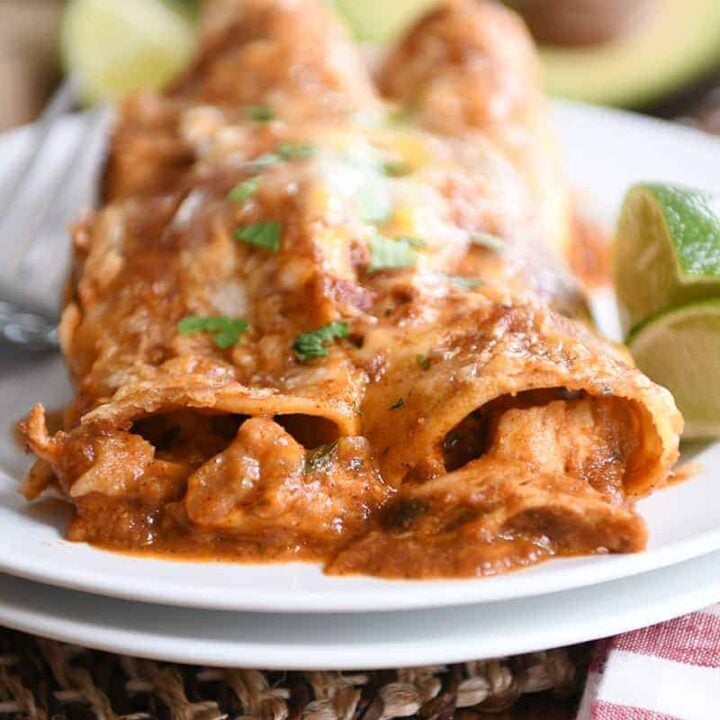 Chili Powder: Chili powder varies in spiciness. I use Penzey's or McCormick brand and as written, the 2 tablespoons + jalapeno makes for a very mildly spicy dish. You can lessen the heat by making sure not to use seeds or membranes of the jalapeno (or only using half of the jalapeno) and dialing down the chili powder to taste.

Make Ahead Instructions: Follow the recipe, letting the sauce, onions and chicken come to room temperature before assembling the enchiladas. Assemble the enchildas and cover the pan with a layer of tin foil and refrigerate for up to 12 hours. Bake covered for 20 minutes, uncover and bake an additional 5-10 minutes. The assembled enchiladas can be covered with a double layer of tin foil and put inside a jumbo-size ziploc bag (if you don’t have a jumbo-sized bag, make sure the edges of the pan are sealed well with tin foil). Freeze for up to 2-3 months. Bake from frozen, baking for 1 1/2 hours covered at 350 degrees F. Uncover and bake an additional hour until hot and bubbly. 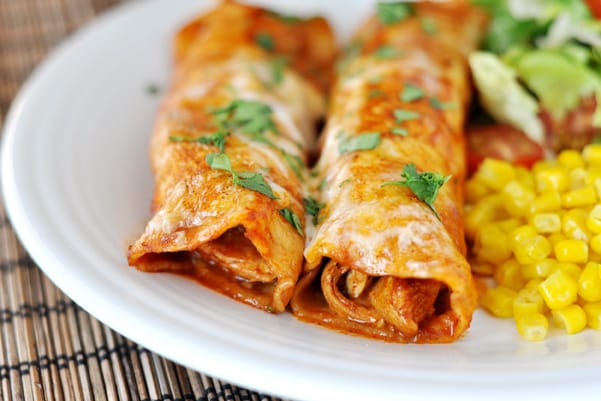 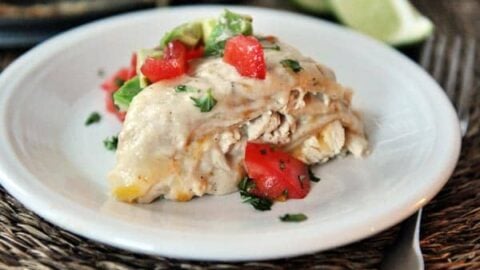 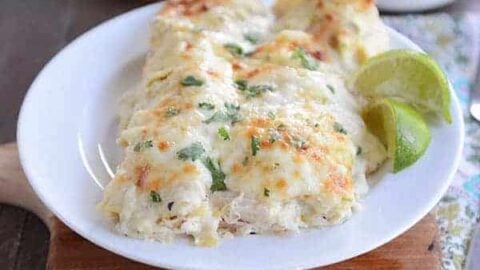 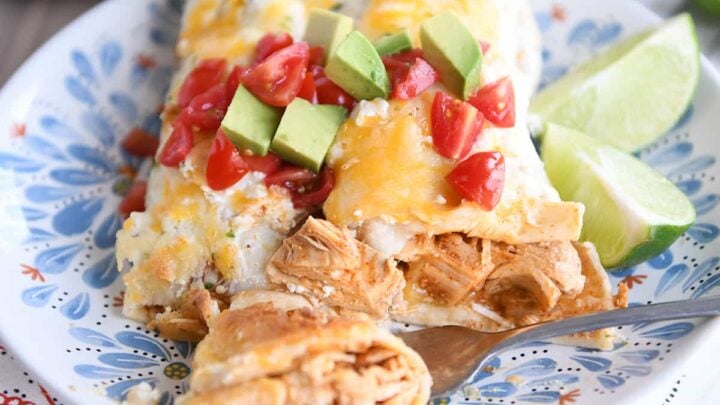 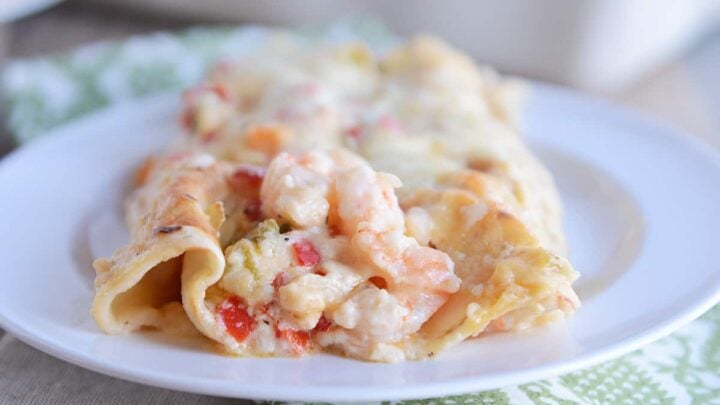